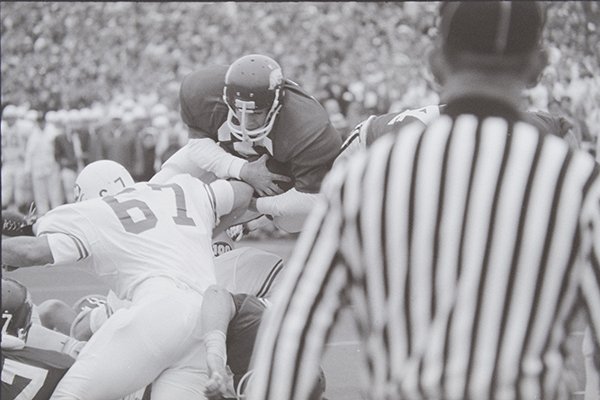 Arkansas running back Bill Burnett rushes for a 1-yard touchdown during the first quarter of a game against Texas on Dec. 6, 1969, in Fayetteville. (Shiloh Museum of Ozark History/Northwest Arkansas Times Collection)

Who is the greatest Arkansas Razorback football player? I’ve asked many people that question in recent years.

If the answer is from someone under 40, these names are on every list: Darren McFadden, Matt Jones, Brandon Burlsworth and Shawn Andrews.

I can debate some of those, but not seriously. They were all wonderful players.

But the one who should be on that list that almost no one ever mentions: Bill Burnett.

Kicker Zach Hocker finally passed Burnett’s record point total (294) in 2013. Hocker amassed 354 in four years. Burnett, because of NCAA rules, only played three years, and he only played half of his senior season in 1970 because of injuries.

No one was more reliable with the football than Burnett.

But that’s not nearly the reason Burnett sits in my all-time top 10 of Razorbacks. It’s his contributions off the field, both with massive lifting in the state’s Fellowship of Christian Athletes and in behind-the-scenes work in a solid career as a counselor at a mental health facility.

During a recent lunch, I asked Burnett how many lives he may have touched in his life off the field and there was really no answer. I dumbfounded him when I reached across the table, to make a congratulatory handshake and said, “Millions, my friend, millions.”

That’s the number a pastor friend and I came up with considering how many in FCA mentored by Burnett became pastors, many going to third-world countries as missionaries. You add to that the number of coaches Burnett mentored and consider their reach over five decades, and the Burnett reach becomes staggering.

So you see, calling him the greatest Razorback takes on an entirely different meaning. Those who watched him dive over piles with a twist or a turn to score touchdowns as Arkansas challenged Texas for national supremacy are quick to give a thumbs up.

It’s just that Burnett wasn’t the only star on those teams from 1968-70 that went 28-5. There were All-Americans everywhere, including on offense with quarterback Bill Montgomery and receiver Chuck Dicus, and plenty more on defense.

Burnett looks back on those days and offers that he just did his job, never mind that it was to gain the toughest yard on the field, that last one. His 1-yard plunges when everyone knew the slightly built tailback was going to get the ball were a thing of beauty. They were almost always over the top and included wiggles and turns to find daylight to start the band playing the fight song.

In the historical book written by Orville Henry and Jim Bailey there is an apt quote from an unnamed coach: He’s the only back I ever saw who could change directions in mid-air.

It was also highlighted that Burnett, at 6-0, 184 pounds, least looked like a star than anyone on the squad.

There was one other major thought in that paragraph. It was written that Bill was just like older brother Bobby, the star runner for the 1964-65 Hogs; neither ever fumbled.

However, Bill Burnett’s life during those three years was being shaped in far different ways than football. Through a young FCA program — with a gentle push from wide receivers coach Raymond Berry — a group of 15 to 20 players began to meet in the dorm.

At some point, University Baptist Church pastor H.D. McCarty mentored the group, but Burnett points to Berry as the major player in his understanding that FCA was important.

“I do recall an event, a meeting that was going to be held on campus,” Burnett said. “Hootie Ingram, one of our coaches, asked me if I’d be a counselor. I was sort of stunned because at that point I was not a believer (in Christ). How could I be a counselor?

“We got that sorted out and I was told I’d be fine and I learned a few things to keep my group discussion going."

Burnett said he attended some FCA camps in Russellville and grew from there.

“We did have a great group meeting in the dorms," he said. "I remember Bobby Field being a part of that. I looked at those guys and what they did and the way they carried themselves. I wanted that. They seemed to have it all together and they were a positive influence on me.”

That began the realization that something was in store for Burnett way beyond football.

“I can recall riding in a car to a Razorback Club meeting — maybe in Benton — with Raymond Berry," Burnett said. "Coaches would take a player or two. He kept talking about things that were important to him, like FCA. He wasn’t really telling me I should do that, but I started to feel that and it was important. I decided I wanted that for my job, after college, to work in FCA.”

FCA didn’t have paid employees in any state at that point. Berry suggested that a trip to the national office in Kansas City might help change that.

“I thought that after college, I’d raise my money and that would be my job,” Burnett said. “Coach Berry liked that and took me in his car to see the national office.”

It turned interesting when the leadership “laughed” at Burnett’s plan, rooted in prayer, to start an office in Arkansas.

“Coach Berry interrupted them,” Burnett said. “He said, ‘You shouldn’t laugh at God.’”

That stopped them in their tracks. Burnett received a blessing to become the first paid worker — with his own fundraising — anywhere except the national office. There are state offices all over the nation now.

“But Bill was the first,” said Barry Lunney Sr., a close friend of Burnett who now works with FCA as a retired coach.

“I was probably at one of the first meetings of coaches that Bill held. I recall him coming to my team at Greenwood to set up an FCA chapter. We’ve been close ever since.”

They are extremely tight now. If you see Burnett, you likely see Lunney, too.

Part of that is out of need. During our lunch as we talked about Burnett’s many football injuries that kept his touchdown total from going much higher, a notecard was pulled from his shirt pocket.

There wasn’t a lot of talk about it, or its origins. Most likely it’s a result of too many tackles in football. Burnett carried the ball 526 times for 2,204 yards.

“I have issues,” Burnett said. “I have speech therapy and physical therapy. I’ve got things that I do to try to help every day.”

Communication comes and goes, but Burnett isn’t scared to try. It’s sort of like when he was handed the ball over and over just 1-yard from pay dirt, he knows that eventually he’ll get it done. He will start a sentence and maybe finish it later when the thought eventually works its way free.

There will be frowns and smiles all through this process. But over a three-hour interview, there was never one sign that he wanted to give up. It's that trait that earned him countless honors on the football field as one of the Southwest Conference's best players.

“I really like being out of the house,” he said. “This is fun. Let’s keep going.”

That’s sort of what it was like at FCA. Raising money to keep it going wasn’t always easy. He had two different careers with FCA.

Rick Schaeffer, the former sports information director at Arkansas, was an FCA worker a few years after Burnett left from his first FCA stint.

“I didn’t get to Arkansas until 1976 and one of the first things I did was put together the press guide,” Schaeffer said. “I had watched Bill play on TV as a young boy because I was an Arkansas fan (in Oklahoma). I was amazed at his record. He’d scored 46 touchdowns and no one was even close to him.

“I was aware that he’d missed half of his senior year and freshmen were not eligible. Just think what he might have had — maybe 60?

“Zach Hocker finally got him as a kicker and I recall that Bill reached out and took him to lunch as a congratulatory move. The record had stood for over 40 years and Bill was first to celebrate it. What a classy move.

“When I went to FCA there was a call to Bill. He’d moved on to personal counseling. Coach (Frank) Broyles said I needed to go see him.

“So Bill impacted my life during that time and I just wonder how many through the years Bill has impacted in similar fashion. It’s got to be an incredible number and such a huge impact in our state.”

Field, who recently moved from Los Angeles to Fayetteville, has spent time reacquainting himself with his teammate. Field spent his professional life as a coach and administrator at UCLA and has a love for FCA.

“We’ve had several lunches,” Field said. “I’ve gotten a chance to catch up on what he’s done these years and it’s amazing.

“He’s made so much more out of life than just of a great football player. He’s made eternal differences in lives and done it for a long time. That is my idea of greatness.

“I know from visiting with many others that he’s done a great job and been faithful. He touched lives.”

That goes with his great play on the field that provided the platform.

“I do recall what he did as a player,” Field said. “He had that incredible knack of going up and over on the goal line. He helped our team finish drives. He would not be denied.

“The other thing I’m pretty clear about: incredible ball security. His dad was a coach and probably put that in him. I never knew him to ever lose the ball.”

Clell Burnett, his dad, won four state titles — not all in football — during a storied high school career at Smackover. He got out of coaching and moved to Bentonville so the family could watch Bill’s older brothers, Bobby and Tommy, play at Arkansas.

Incredibly, the Bentonville coaches did not think Bill was a running back. He played a few games at offensive guard, probably the worst use of a fine athlete ever.

That changed when there was trouble moving the ball and the backfield was depleted early in the season. He was moved to tailback at halftime. He scored six touchdowns on seven carries in that first game.

Tulsa recruited Bill as a wide receiver, although it was a foregone conclusion that he’d follow his brothers to Arkansas. He languished at the bottom of the depth chart early in spring training as a freshman. When he got his chance, there was immediate success and no one challenged him as the starter for three seasons.

A dislocated toe and a shoulder separation knocked him out of some games, but he played through the pain in many others.

“I had trouble at one point (with the toe injury) and Henry Huelshorst, our equipment man, built me a shoe with a steel plate,” Burnett said. “That helped, but it produced a problem that only he and I knew about: I couldn’t cut in one direction.”

Burnett worried that opposing coaches would eventually figure that out.

“I had my moves, but I’d lost one,” he said. “Henry decided on a way to fix it. He put a similar steel plate in the other shoe and I could cut both ways again.”

It never caused a problem on the goal line. You don’t need toe stability once you go airborne. That’s when Bill Burnett was unstoppable.