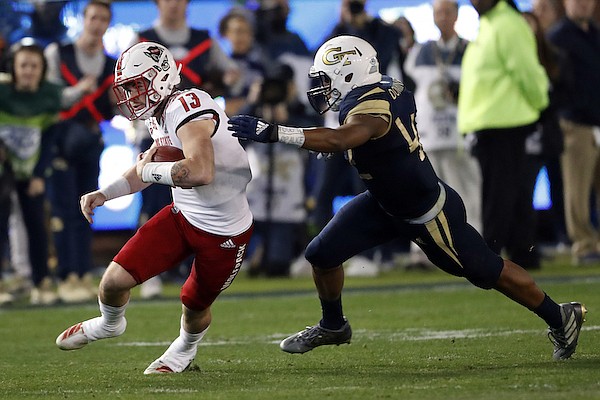 One of the most popular positions in football right now, no matter the level, is the edge rusher.

It is used to describe a hybrid linebacker/defensive end who most often plays at the end of the line in a 4-3 formation and an outside linebacker in a 3-4 look.

It’s all about getting pressure on and disrupting quarterbacks so they cannot hang in the pocket and dissect defenses.

The position has been spotlighted this week in Arkansas football recruiting with commitments from two players who fit that description and another set to make an official visit this weekend.

Dean had some spectacular stats as a junior with 86 tackles, 10 sacks, 2 forced fumbles, 1 interception returned for a touchdown, 5 pass breakups, 25 tackles for lost yardage and more than 30 quarterback pressures.

Word came Tuesday that Tulane transfer Darius Hodges (6-1, 280) would be making an official visit to Arkansas beginning Friday. He played a position for the Green Wave labeled the Joker.

With apologies to Steve Miller and his 1970s super band, I don’t care if you call it the Joker, Smoker, Midnight Toker or edge rusher, but Arkansas’ defense needs to increase pressure on opposing quarterbacks.

The Razorbacks’ 24 sacks last season were 13th in the 14-team SEC, ahead of only Vanderbilt’s 9.

When you factor in that lack of defensive pressure, it is stunning that Arkansas was able to finish 9-4 overall and 4-4 in league play.

You could envision two more wins with well-timed sacks at Ole Miss and against Auburn and maybe even another one in what turned into a 42-35 loss at Alabama.

Tre Williams led Arkansas with six sacks. The players returning for the 2022 season had seven combined.

The additions of LSU transfer Landon Jackson (6-5, 275) and Domineck (6-4, 253) should provide immediate help, as will Hodges if he lands in Fayetteville.

Jackson, injured in his only year in Baton Rouge, announced his presence as a sophomore at Texarkana (Texas) Pleasant Grove with 16 sacks among his 100 tackles on a state championship team.

Throw in incoming freshmen defensive lineman Nico Davillier and rookie linebackers Jordan Crook, Mani Powell and Kaden Henley — a trio that is already on campus — to the those returning and there is some sack potential.

More on to 2023, where you have already landed a pair of Texas juniors and Mansfield’s Kaleb James in a 10-member recruiting class that is ranked third nationally by ESPN, 247 Sports and Rivals.

James had 57 tackles, 16 tackles for loss, 10 sacks, 27 quarterback hurries, 1 fumble recovery and 1 pass defended as a sophomore at Fort Worth Nolan Catholic.

The potential for pressure is on the horizon. Now it is time to harness it.