Turner makes splash at, behind the plate 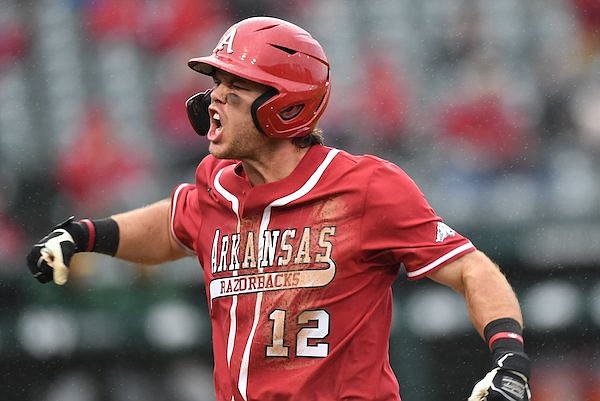 Arkansas catcher Michael Turner celebrates Saturday, March 5, 2022, after hitting a two-run home run during the seventh inning of the Razorbacks' 4-2 win over Southeastern Louisiana at Baum-Walker Stadium in Fayetteville.

For the seventh-ranked Razorbacks, it seems Turner time occurs multiple times in every game.

The transfer from Kent State has starred at the plate and in the field during Arkansas’ 9-3 start to the season. Turner ranks second among the team’s every-day players with a .359 batting average — three points below third baseman Cayden Wallace’s average of .362 — and leads the Razorbacks with 14 RBI.

Behind the plate, Turner has pleased Arkansas’ coaches with the way he calls pitches and controls the run game of opposing teams. Turner, who is on the watch list for the Buster Posey Award as the nation’s best catcher, has thrown out base runners on 31.3% (5 of 16) of stolen-base attempts, above the SEC average of 24.7% entering the weekend.

And if that isn’t enough, Turner has been a serviceable first baseman in the second game of three doubleheaders. He made key defensive plays in wins over Southeastern Louisiana last Saturday and Illinois-Chicago on Thursday.

“He’s been big for us this year,” Arkansas coach Dave Van Horn said. “He’s been catching really well, throwing people out, handling pitchers, blocking. I don’t know what else you could ask for.”

Turner, 23, was an All-MAC catcher at Kent State in 2019, but his following two seasons were cut short due to covid-19 in 2020 and a hamstring injury last year.

“It’s amazing he’s not playing professional baseball right now,” Arkansas first baseman Peyton Stovall said. “I feel like he’s a big-league catcher playing college baseball. The Michael Turner everybody is seeing now is what we’ve all seen as players in the fall and early in the spring. It’s not a surprise to us he’s hitting like this. He’s experienced, mature beyond his age, and just having a guy like that is good for this team.”

On Thursday, Turner hit a two-out RBI single to score Stovall to cap a four-run eighth inning rally that gave the Razorbacks a 5-4 win over UIC. It was Turner’s second go-ahead hit in the past week. He also hit a two-run home run in the seventh inning of a 4-2 win over Southeastern Louisiana last Saturday.

“He’s been a big threat, especially lately,” Van Horn said. “He’s been one of our hottest hitters. He’s the guy you want to see up there, probably, if the game is on the line right now.

“He’s been a tough out. He’s hard to strike out. He puts the bat on the ball.”

In addition to being Arkansas’ hottest hitter, Turner might be the Razorbacks’ unluckiest. He has lined out or flied out on several hard-hit balls early in the year.

“I don’t ask him to go up there and swing for the fences,” Van Horn said. “He just hits the ball all over the field.”

For his go-ahead hit Thursday, Turner hit a blooper over the head of the UIC second baseman.

“I feel like I've hit a few balls hard this year that have gotten caught,” he said, “and I paid my taxes a little bit on that last one.”

As SEC play nears, Turner appears to be a solid replacement for departed three-year starter Casey Opitz behind the plate. Like Opitz, Arkansas’ coaches trust Turner to call pitches.

“I think Michael has done a really nice job of calling pitches,” Van Horn said. “He’s got the headset on where we can radio in something. A lot of times you’re just talking to them like, ‘Hey, you’re doing a great job; whatever you feel like on this pitch.’ A lot of times if it’s a real tough situation, we’re going to call (the pitch)…but I think he’s done a good job. He’s done a good job of blocking and when the pitchers have given him an opportunity to throw out a runner, he’s pretty much done it.”

Arkansas pitcher Connor Noland said Turner has become a valuable leader in the clubhouse and has built a good rapport with pitchers.

“I think he does a great job of slowing the game down for pitchers,” Noland said. “He’s got a different attitude out there. He’s kind of calm, cool, collected.

“I don’t shake him very often and he’s mainly the one who calls the game. He gets hints from the coaches here and there, but he’s totally in control and kind of guiding us through the lineup.”