Razorbacks further along on first day of spring drills 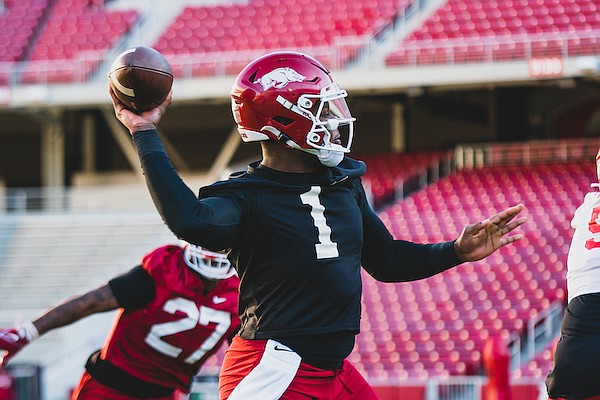 FAYETTEVILLE — It was advertised as the first day of spring football practice.

But what Arkansas did on a beautiful Sunday afternoon at Reynolds Razorback Stadium wasn’t like anything I’d ever seen in that slot on the agenda.

An insider with the Arkansas football team offered a subtle explanation as I watched some precision in the passing game and outstanding structure in drills. They’ve been doing walkthroughs ahead of this practice.

It makes sense that more and more football has become big business. The NCAA knows as much. There has been a relaxing of rules to allow more work that closely resembles a spring football practice.

That’s why quarterback KJ Jefferson looked smooth and polished in the passing game. It’s why receivers Ketron Jackson, Bryce Stephens and Jadon Haselwood looked slick. There just were not many balls hitting the green, winter grass in the stadium.

There was much more polish to the drills than I’ve ever seen in a spring practice. It was beautiful stuff.

The intensity from running backs Raheim “Rocket” Sanders and AJ Green was outstanding. Of course, they were in something less than full pads so there was no tackling. But I don’t know how many times either one of those would have gone to the ground on sweeps or wonderful inside reads that Jefferson made in the running game. It was sparkling stuff.

Sanders is listed at 6-2, 221 pounds, but it’s a rebuilt body. His acceleration is amazing. Wearing the No. 5 made famous at Arkansas by Darren McFadden, the comparisons were striking. He hit the cracks with a burst. He ran through the secondary — and I’m not sure any wanted to tackle him — with a forward lean that seemed unfair. It was unlike I remember of late from an Arkansas runner.

Green has always been fast, but he’s also built differently. He is thicker in the lower body. He’s just as quick and was around the end in a blink of the eye.

Jefferson just keeps getting better in the passing game. He lofted a pass during a two-minute drill that looped deep down the field on a deep out that is nothing like I saw last year. No defender had a shot at it. It was soft and delicate, but deep to the sideline. Linebackers and safeties had no shot.

All of the newcomers are impressive, especially inside linebacker Drew Sanders, a transfer from Alabama. He played as an edge pressure specialist for the Crimson Tide, but he’s inside at Arkansas — probably the reason the Razorbacks landed him.

Watching Drew Sanders go through a bag drill with quick feet tells you he’s got unusual skill for someone with incredible length. He’s 6-5, 232.

My only concern was an artificial hamstring protector strapped to one leg. I’ve never seen anything like it. It will protect him while he works through a sore muscle.

Drew Sanders has stop and go agility. He can keep up with any of the linebackers in this group and it’s an impressive group. Redshirt freshman Chris “Pooh” Paul and true freshman Jordan Crook pass the eye test, too. Paul has dropped to 232 and is much quicker to the alleys, a concern last year when he was over 240.

Of course, linebackers have to pass the football test, not what was played today. They have to tackle. Judge them after a scrimmage.

But it looks better going forward even after losing Grant Morgan and Hayden Henry. Bumper Pool will have to carry the load while coaches figure out if Drew Sanders, Paul and Crook can play downhill and also get to the boundary. Morgan and Henry did both, as did Pool.

The offensive line has a different swagger. Tackle Devon Manuel is the most impressive. His 6-9 frame gives him an advantage on sealing the edge at left tackle. Look out for his development. It may be a treat.

Ty’Kiest Crawford has changed his body. At 6-5, 347, Crawford, there is a lot to like and he carries it better than last year.

As far as the eye test, Jefferson has lost a few pounds. Whether or not he’s down to 245, what it says on the roster sheet, isn’t confirmed. But he’s lighter than what it seemed like he was for the Outback Bowl. That’s another positive.

Tight end Trey Knox carries his new weight (233) in smooth fashion. He is plenty fast for his position. It was Knox who cleared the linebackers for that sideline pass from Jefferson.

The other highlight throw from Jefferson was a bomb that hit Stephens in stride. Haselwood scooped a low throw over the middle earlier in the day, a sign he can adjust to about anything.

It was only two hours of viewing. The next chance happens Tuesday. It will be hard to beat the first day.