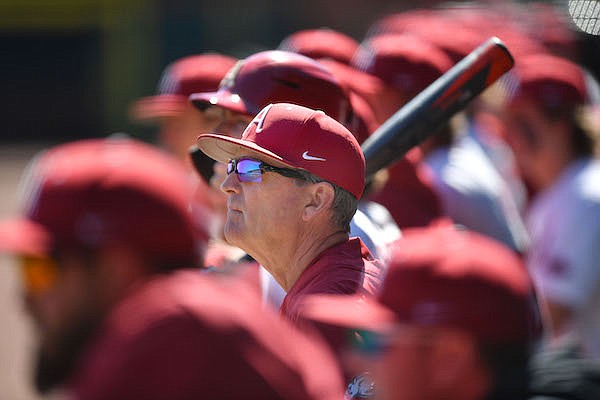 Arkansas coach Dave Van Horn watches during a game against Illinois-Chicago on Thursday, March 10, 2022, in Fayetteville.

WHERE Baum-Walker Stadium (11,531) in Fayetteville

TELEVISION The game will be streamed by SEC Network-Plus and can be accessed on WatchESPN.com and via the ESPN app (carrier login required).

FORECAST According to the National Weather Service, Sunday will be sunny with a high of 74 degrees in Fayetteville. Southwest winds could gust up to 25 mph.

NOTABLE Sunday's game will be Arkansas' last of a 13-game homestand. The Razorbacks have not played away from Baum-Walker Stadium since Feb. 27....Arkansas third baseman Cayden Wallace and Kentucky third baseman Chase Estep were among Collegiate Baseball Newspaper's national players of the week named Monday....Estep, who entered the series 12th nationally with a .471 average, is 1 for 8 in two games against the Razorbacks. His 17-game hit streak came to an end Saturday....Arkansas outfielder Chris Lanzilli has a 12-game hitting streak and leads the Razorbacks with a .381 batting average....The Razorbacks are expected to be without outfielder Jace Bohrofen (shoulder) and right-handed relief pitcher Issac Bracken (groin) during the series....Arkansas has won 18 consecutive regular-season weekend series at home....The Razorbacks have won six consecutive series against Kentucky and have not lost a series to the Wildcats since 2012.