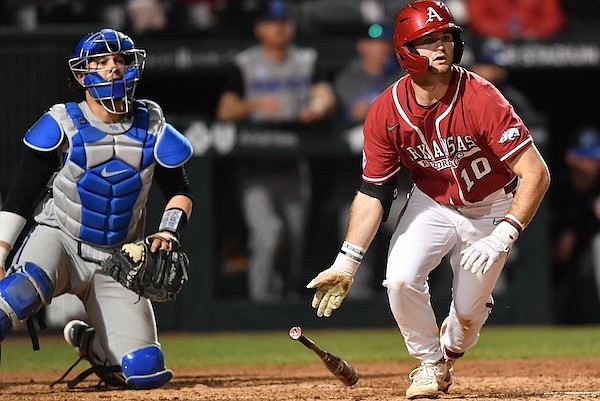 Arkansas first baseman Peyton Stovall (10) bats during a game against Kentucky on Saturday, March 19, 2022, in Fayetteville.

FAYETTEVILLE — Arkansas hit a pair of home runs during a three-run second inning to take the lead and cruised to a 9-3 victory over Kentucky on Saturday at Baum-Walker Stadium.

The fourth-ranked Razorbacks (15-3, 2-0 SEC) took the series from the Wildcats and won their 10th straight game. Arkansas will go for a series sweep Sunday beginning at noon.

Braydon Webb hit a one-out solo home run to the left-field bullpen to put the Razorbacks ahead 3-2 and Peyton Stovall followed with a two-run homer to right-center field in the bottom of the second.

Arkansas answered a two-run frame by the Wildcats in the top of the second inning, when Alonzo Rubalcaba and Ryan Ritter had RBI hits.

The Razorbacks took a 2-0 lead in the first inning on a two-out double by Robert Moore.

Arkansas freshman left hander Hagen Smith settled in after the second and delivered a quality start in his SEC debut. Smith allowed 3 runs, 5 hits and 3 walks, and struck out 7 in 6 innings. He earned his fourth win.

Smith’s only blemish after the second inning was a one-out home run off the bat of Hunter Jump in the sixth. By then the Razorbacks were in control.

Arkansas took an 8-2 lead in the bottom of the fifth inning when Moore and Brady Slavens drew consecutive two-out walks with the bases loaded. Moore had his second consecutive 3-RBI game.

The Razorbacks scored eight runs with 2 outs. Jalen Battles’ two-out single in the fourth put Arkansas ahead 6-2, and Slavens’ sacrifice fly scored Michael Turner in the sixth to extend the lead to 9-3.

Chris Lanzilli scored twice and reached base in his first four plate appearances on a pair of walks, an error and a sixth-inning single that extended his team-leading hit streak to 12 games.

Zebulon Vermillion pitched three scoreless innings to earn his first save of the season. Vermillion retired nine consecutive batters after a leadoff walk to Rubalcaba in the seventh inning. He struck out five Wildcats, including Rubalcaba looking to end the game.