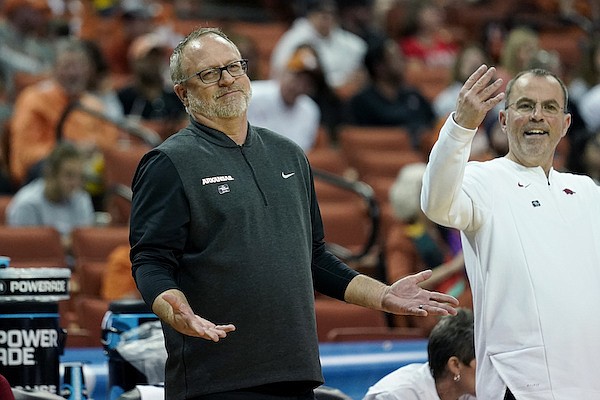 Arkansas head coach Mike Neighbors, left, reacts to call during the second half of a college basketball game against Utah in the first round of the NCAA women's tournament, Friday, March 18, 2022, in Austin, Texas. (AP Photo/Eric Gay)

AUSTIN, Texas — Mike Neighbors hinted at his excitement about the future of the University of Arkansas women’s basketball program a couple of times recently, but he wasn’t ready to turn the page on Friday evening.

The Razorbacks are set to return every player but one off the team that fell 92-69 to Utah in the opening round of the NCAA Tournament in the Frank Erwin Center.

Neighbors will take some time first to reflect on the season that included the program’s first back-to-back NCAA Tournament berths since 2002-03.

“Not yet. No. This is still too much on these kids that are on this team,” Neighbors said following the season-ending loss. “We’ve got plenty of time … but not today, not during this. There’s so many emotions in that locker room. Everybody — I told them to all deal with it however they deal with it. I’m not going to tell them how to feel. Feel the way you feel. We all feel probably a little differently in different manners, but that’s what makes a team sport a team sport.

“I am excited about it. I will turn the page very, very quickly. But that’s for us to do. I want them to absorb it, learn from it, grow from it. But I won’t talk to them — we won’t do anything. We go on spring break next week, so we’ll let them enjoy spring break.”

Transfers Saylor Poffenbarger and Maryam Dauda are also expected to play key roles. The 6-4 Dauda has the makings to give Arkansas more of a true post presence. Both she and Poffenbarger have practiced with the team second semester. Poffenbarger transferred from UConn, while Dauda was fully cleared to return to action just before Christmas from surgery to repair a torn ACL.

The Razorbacks (18-14) endured their share of adversity as four different starters suffered injuries. Erynn Barnum missed six weeks with a knee injury after starting the first nine games, while Makayla Daniels was out four games late in the season because of a bone bruise.

Samara Spencer, the SEC Freshman of the Year, suffered a broken nose in the Razorbacks’ loss to Ole Miss but didn’t miss a game. She was forced to play final weeks of the season wearing a protective mask. Amber Ramirez, the team’s lone senior, even missed two games because of an undisclosed injury before Christmas.

The Razorbacks rebounded from a four-game losing streak to win the regular-season finale at Mississippi State. They followed that up by edging Missouri in overtime in the opening game of the SEC Tournament and claimed an at-large NCAA Tournament berth — the 13th in school history.

Ramirez, who finished her career as the Razorbacks’ career leader in three-point shooting percentage (42.9%), said the group stuck together and likely accomplished more than was expected with five freshmen and the loss of seven seniors.

“I think this team accomplished a lot, a lot more than a lot of people expected us to do with us losing everybody,” said Ramirez, who averaged a team-best 15.4 points per game. “The rest of our team we fought as much as we could every game. We fought through adversity. We had people go down. We had people who got sick. We just had a lot of people go down, and we always fought through adversity no matter what happened.

“The great family environment that we had. We always stuck together no matter what happened. Even in this last game we played, we always stuck together. We always wanted to play for one another. That’s something I’m going to cherish for the rest of my life, just the memory, like the family environment we had no matter what happened.”

Daniels acknowledged she will leave a void, but the junior said the group can build off this postseason experience.

“I think it definitely does fuel us just because most of us coming back next year are going to know what it feels like for this loss, going to know that pain of our season ending,” Daniels said. “So I think it’ll definitely fuel us and it’ll make us a much better team next year.

“Of course we’re losing Amber, but I think if we just come together and kind of find a way to fill that void that’s going to be there — obviously we can’t replace her, but we can do our best to try to make up for that scoring that she brought, the energy that she brought, the leadership.”

Neighbors talked about how he made a mistake traveling on game day throughout conference play a year ago, which led to struggles when the team had to stay in a hotel for a week prior to the NCAA Tournament because of the pandemic.

But he made sure the team enjoyed their experiences in Nashville, Tenn., for the SEC Tournament and in Austin.

“You’re never going to win all your games or all the things you do in life, so you learn how to handle things together,” Neighbors said. “I think this is a huge part of the experience. But if we’d have come down here and not enjoyed the town, then that’s all you do have. I know they’re going to be talking about things that have happened the last two, three days in time.

“I’ll promise you I wouldn’t trade two wins for the experience that we had. I wouldn’t. I wouldn’t make one change in anything that we’ve done in any way that we’ve prepared these guys to experience what they’ve missed in the past. It obviously would have been nice to have a win, but not worth the exchange of a win to not have enjoyed the experience.”