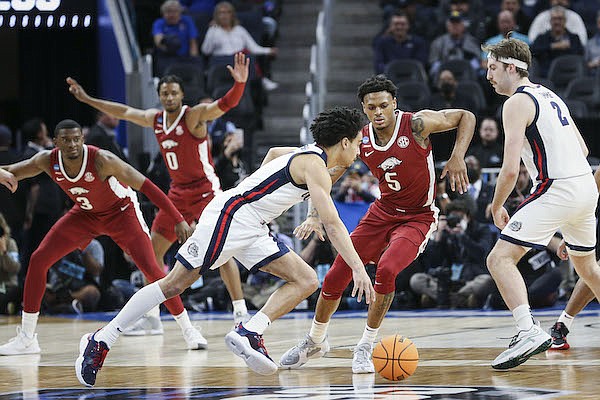 Arkansas players defend during an NCAA Tournament game against Gonzaga on Thursday, March 24, 2022, in San Francisco.

Arkansas coach Eric Musselman utilized one of my dad’s favorite words during his description of how the Razorbacks eliminated No. 1 Gonzaga on Thursday night at the NCAA Tournament.

If one of his four sons brought home a report card with anything except straight As, Orville Henry would rub his forehead a few times, then mutter some choice words about lack of effort.

Then, almost every time, my father would say, “I am discombobulated.”

It hurt every time. I didn’t have to turn to Webster to understand. My father was utterly confused at how anything but a simple grade of A could be on a report card.

That Latin was — and still is — a dead language was not an excuse for a C during two semesters of my junior year at Little Rock Central High School.

Musselman was talking about the Arkansas offense when he dropped “discombobulated” on CBS floor reporter Tracy Wolfson after the Hogs’ victory in the Sweet 16. He said the Hogs did not look “cosmetically pleasing” as they fired quick or ill-advised shots.

A half hour later when Wolfson interviewed Gonzaga coach Mark Few there was one admission that was more appropriate than any downplay of the Arkansas offense. Instead, he pointed at the major difference in the game and what makes this Razorbacks team a threat to win it all for the second time in school history.

“Their defense is real,” Few said, also noting that the Hogs can play a physical brand of basketball at all five positions.

That “real” defense revealed the Zags as soft, something that I thought all week as I did talk radio. They had not faced the same competition in conference play as the Hogs. They had too many easy victories where their starters were not taxed for 40 minutes like the Razorbacks were in the SEC.

Move along to Saturday’s Elite Eight game with Duke. It’s a clash of Arkansas' defense versus Duke's smooth offense.

More from WholeHogSports: How to watch, listen to Arkansas-Duke

The Blue Devils sank 70.8% of their shots in the second half to oust Texas Tech, another defense-first team like Arkansas. They made their last eight field goal attempts.

I was amazed that during Duke’s stretch run to hold off the Red Raiders there were a few possessions when the Blue Devils resorted to a zone defense, a bit of a rarity for coach Mike Krzyzewski, at least this season.

The Blue Devils played man-to-man 95% of the time this season, according to analytics. But with the game on the line, he turned to a 2-3 zone — something Krzyzewski has done successfully in other seasons.

But his players begged to play man-to-man in the next timeout and that’s what the Blue Devils used to get the three critical stops that provided the cushion in a 78-73 victory.

Don’t look for Musselman to play anything but sticky man-to-man defense against the Blue Devils. But, as they say, the devil is in the details.

Who covers Duke power forward Paolo Banchero, a 6-10, 250-pound freshman who may have passed Auburn’s Jabari Smith and Gonzaga's Chet Holmgren as the potential No. 1 pick in this summer’s NBA Draft.

Banchero, an Italian-American born in Seattle, is a slick three-point shooter but with more inside game than the Auburn or the Gonzaga stars. Banchero was considered the nation’s No. 3 recruit by ESPN last year.

The defense against the Zags was superlative. The high-low passes that made that offense so potent were not existent. In many games, Drew Timme and Holmgren befuddled outmanned foes with passes to the rim if either had a mismatch. It never happened with what Musselman drew up.

Sometimes it’s as simple as one team playing tougher. To me playing tough — or hard — is the essence of coaching. It’s what made the Arkansas defenses salty when both Eddie Sutton and Nolan Richardson patrolled the sidelines.

Corey Beck was the best defender on the 1994 Arkansas team that beat Duke in the title game. Some credit his forearm shiver to the chest of Corliss Williamson as the turning point when the Hogs were down nine points in the second half.

Brad Dunn, an assistant coach to Richardson, said they were coming out of a timeout when Beck confronted Williamson about his lack of rebounding to that point.

“He hit Corliss pretty hard and said, ‘Are you going to get a rebound tonight?’” Dunn said. “Corliss got almost every rebound for the next 10 minutes.”

Beck got the key offensive rebound, then passed to Dwight Stewart. The Big Dog, as Beck called Stewart, fumbled the ball a bit, then shoveled a pass to Scotty Thurman to set up the three-point shot to break the last deadlock and send the Hogs to a 76-72 victory.

Beck continues to be impressed with the complexity of the Musselman defensive plan and it changes every game. But there is one constant, Beck said Friday morning, it's the way teammates cover for each other if a mistake is made.

"It's the best help-side defense that I've seen in a long time," Beck said.

This is not a prediction that this Arkansas team is going to win the national championship, but it has the same defensive intensity and toughness. That is the No. 1 quality that wins championships.

But the Hogs have a legitimate shot against anyone they play the rest of the way. ESPN analyst Jimmy Dykes told me Friday they are respected by 100% of the nation’s top coaches because of that defensive intensity and toughness.

They have the ability and desire to discombobulate.