Analysis: Hogs have plenty of questions this spring 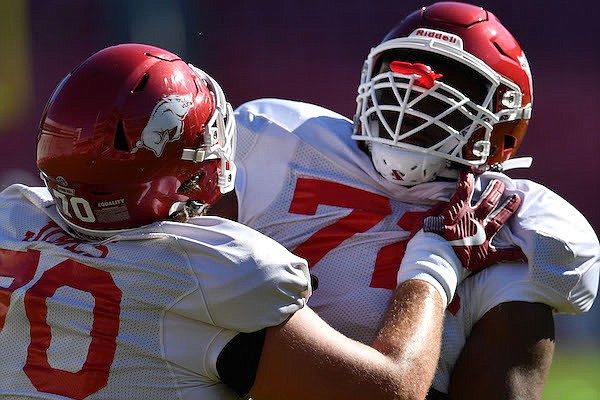 FAYETTEVILLE — Sam Pittman splashed into the Sweet 16 excitement for the Arkansas Razorbacks’ basketball team late Thursday with some fresh pictures.

The University of Arkansas football coach revealed on social media the combination water fountain and rock structure, topped by a pair of Razorback statues and accentuated by red lights, that sits lakeside at the Hot Springs property owned by he and wife Jamie. Pittman wrote he was planning to wait until a football event to showcase the “hidden secret,” but he added “tonight was just too big!”

When Tuesday rolls around, it’s back to the practice field for the Razorbacks, who got in three workouts prior to spring break and have 12 remaining.

The Razorbacks were clearly getting after it in spider pads the first two days and then shoulder pads and shorts on the third day. Full gear can be part of the equation this week and that will add to the physicality Pittman and his coaching staff have instilled in a program that went 9-4, including a 24-10 win over Penn State in the Outback Bowl.

As the Razorbacks resume spring drills, here are the top questions facing them during the session.

Can the pass rush evolve?

The Arkansas coaching staff is still seeking can’t-miss pass-rush specialists as the most elusive piece in the recruiting process.

The coaches have determined that better first-down defense and adding a man to pass-rush situations are critical for the Razorbacks.

Some of the early spring work has shown sending an extra linebacker or defensive back in a variety of ways has created pressure on the pass protection and the quarterbacks.

Arkansas had 24 sacks last season, less than two per game, to rank 13th in the 14-team SEC. And the Hogs lose top sack man Tre Williams off that team.

In the three-man front, current starters Eric Gregory and Zach Williams will have to be strong tacticians to break free and hit the quarterback. Jashaud Stewart, Eric Thomas and Mataio Soli return as veteran ends, but none has proven to be an ace edge rusher yet. Landon Jackson, the transfer from LSU, has not participated yet this spring as he rehabs from injury.

Who will rise up at receiver?

There’s a huge vacuum left behind by the departure of Treylon Burks, whose speed and skill set discouraged man coverage.

Can the Razorbacks find a single go-to target for quarterback KJ Jefferson or will several players have to step into larger roles? The answer is likely the latter option.

The coaching staff has done a good job of emphasizing man-to-man drills on the edges, and sophomore Ketron Jackson Jr. has emerged as someone who can win those with some regularity. Oklahoma transfer Jadon Haselwood, a former five-star signee, has also shown strong ball skills on the deep pass.

Warren Thompson was a deep-ball Robin to Burks’ Batman last season, so he has a chance to be the most targeted long threat.

Additionally, Bryce Stephens and Jaedon Wilson have hauled in some long throws early in spring, but both have to be more consistent on catches.

Who will win the left tackle job?

Versatile Luke Jones is getting first crack at the job after a couple of years of spot duty following his transfer from Notre Dame. The 6-5, 327-pounder fits squarely in the mold of a Pittman lineman for position coach Cody Kennedy with his size and weight.

Redshirt freshman Devon Manuel, a massive 6-9, 366-pounder, needs to lose even more weight to round into form, but he’s a project that could pan out as a dominator. Meanwhile, true freshman E’Marion Harris (6-7, 362) and junior Ty’Kieast Crawford (6-5, 347) would factor in on the left or right side, where Dalton Wagner (6-9, 337) is a long-time starter.

Can the Hogs make up for losses at LB?

Grant Morgan and Hayden Henry took a ton of snaps for the Razorbacks the last few years, and in 2021 they had developed into the type of players who made everyone around them better.

Fifth-year senior Bumper Pool is back to assume that kind of role on the Hogs’ second level, but is there enough talent to maintain the strong level of linebacker play of the last couple of years?

Redshirt freshman Christopher Paul has been taking the bulk of first-team reps with Pool thus far, but there are plenty of other options.

Pittman has voiced his enthusiasm over freshman Jordan Crook a couple of times this spring, as well as classmate Kaden Henley.

Additionally, Alabama transfer Drew Sanders certainly looks the part at 6-5, 232 pounds, the biggest linebacker Arkansas has had in years. When Fayetteville High product Mani Powell, a 6-3, 220-pounder, recovers from his knee injury, the Razorbacks will have another hard hitter and more versatility in the corps. Perhaps the new wave of linebackers can add a level of versatility for the position group.

Will the running game repeat its prowess?

Arkansas had four 500-yard rushers for the first time since 1971 and only transfer Trelon Smith does not return from that group, which also featured Jefferson (664 yards, 6 TDs) and tailbacks Raheim Sanders (578, 5) and Dominique Johnson (575-7).

The run blocking has a strong chance to be just as stout or even better, and the versatility and functionality in the tailback corps is right in line with the modern college game.

As Johnson recovers from surgery this spring, Sanders and fellow sophomore AJ Green (227, 1) are getting an extended look, along with redshirt freshman Javion Hunt and true freshmen Rashod Dubinion and James Jointer.

The run game and the personnel to showcase in it look as strong as last year or even better.