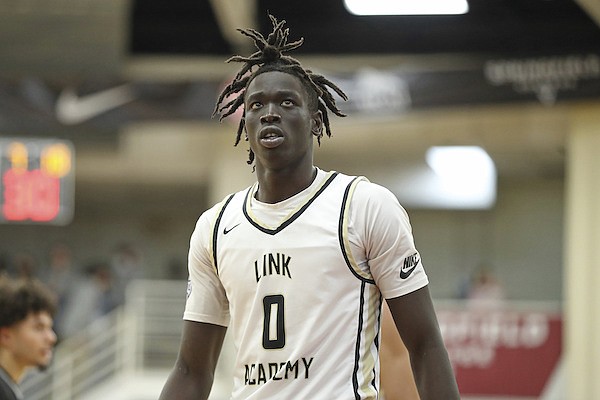 Branson (Mo.) Link Prep and Link Academy have been good to Arkansas coach Eric Musselman’s program so far, and there’s another basketball prospect there the Razorbacks would love to land for their 2023 class.

Junior 5-star power forward Omaha Biliew (6-8, 205 pounds), ESPN’s No. 8 player overall in his class, is the next Lions’ star who might follow the Link-to-Arkansas path set forth by Mason Jones and 2022 Razorback signee Jordan Walsh.

Link founder Adam Donyes raves about Biliew, an Iowa native, on and off the court.

“Omaha is probably one of the best young men that I have ever been around in my life,” Donyes said. “The way he interacts with people. His shot has improved tremendously this year. He is one of our top three-point shooters. He continually works on his hands and his ball handling has gotten better. He is one of the more coachable kids, one of the most humble kids I have ever seen.”

Biliew is part of a roster that includes Walsh, 4-star Michigan commit Tarris Reed (6-8, 230) and 5-star Julian Phillips (6-8, 200), who was committed to LSU, but recently reopened his recruitment.

“I think Tarris, Jordan and Julian are all going to be really special, I really do,” Donyes said. “But Omaha is cut from a different cloth. Some of these kids love the game because it has always been in front of them, but Omaha is playing for bread.

“What I mean by that is this is his only chance. Those other kids come from good stability and good homes, but Omaha has scratched and clawed for everything he has gotten and is quite the young man. I love being around him and can’t say enough good things about Omaha.”

Biliew has offers from Arkansas, Kansas, Oklahoma State, Nebraska, Georgia, Illinois, Iowa, Michigan, Tennessee, Texas Tech and others. There is interest from Memphis and TCU.

He has a tentative timetable for making a decision, said Donyes, who notes it will come after playing for Team Mokan in AAU competition this spring and summer under Link head coach Rodney Perry.

“I have talked to him very briefly on it and I know he wants to make that decision before going into the fall,” Donyes said. “I know he is trying to just focus on Geico right now and then he will get going on the EYBL circuit. He is keeping his cards pretty close to his chest.”

“Coach Muss is just killing it over there,” Donyes said. “Two runs to the Elite Eight, he’s bringing in Jordan and some other great talent and just seems to have it set up for success at Arkansas for a long time. We have great respect for what he is doing.”

Walsh visited Arkansas for several games during recently completed season and was quickly adopted as a fan favorite.

“First of all, I know because every time he goes down there, he is asking to borrow my car,” Doynes said. “It has gone phenomenal. When he first got here, I wasn’t sure how it was going to go with that many 5-stars on one group, but they have all laid aside their own egos, including him. That makes me feel he will be able to do it again with (newly committed Anthony Black) and Nick Smith.

“He has really become a team player. He is really competitive, works hard and shows up in the weight room every morning. I just think he has had a great year and is a great kid with a bright future. We have loved having him here and we are proud to say he was a Lion.”

ESPNU will televise all the games in the three-day event at Suncoast Credit Union Arena in Fort Myers, Fla.

It is a great achievement for Link Academy to be playing for a national title in its first year of existence after joining Link Prep High School on the Kanakuk christian summer campus.

“I’m blown away,” Donyes said. “To say that it has exceeded expectations would be a gross understatement. I thought we would be good the first year, but I didn’t think we would be 32-1.

“We had a lot of cards stacked against us to get to the tournament because a lot of those old heads didn’t want a first-year team in it. We basically took the only loss we could afford to lose and did everything else we needed to do.”