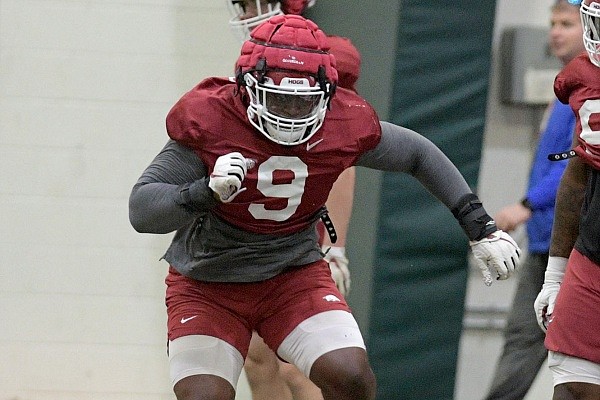 The magnitude of the injury and how long it will keep Carter sidelined have not been disclosed by Coach Sam Pittman.

Carter went to the turf in pain during a “thud” contact segment of the team’s spring showcase event inside the Walker Pavilion on April 16. He was aided off the field by team by medical personnel and has been under observation since then.

Pittman said at the time, “I don’t think it’s an ACL or anything of that nature, but there is something there that we have to tend to.”

The injury to Carter comes at what stacks up as the thinnest position on the team, the interior defensive line.

Senior Isaiah Nichols from Springdale, Carter, redshirt junior Marcus Miller and redshirt freshman Cam Ball were the only scholarship players playing strictly at tackle during the spring. Additionally, defensive coordinator Barry Odom has shown the versatility to line up Eric Gregory or other players who are most often ends on the inside and also to employ three-man fronts.

Still, Pittman said the coaching staff has targeted defensive line as a position to add personnel through the transfer portal.

Asked on April 12 if securing two defensive linemen and an additional wide receiver through the portal was still the most likely scenario for the Razorbacks, Pittman replied “That’s the plan.

“Unless somebody comes out of there that we’re going, ‘Oh my gosh.’ If that happens, then it’ll be somebody else. But that’s the plan.

“I think we’re still waiting on a situation with the portal and dates and all that kind of stuff, as well. So some things change on there, our plans may change.”

Arkansas also hosted defensive lineman Morris Joseph, a 6-2, 275-pounder who played at Memphis and has been committed to Georgia Tech since March 24. The Razorbacks continue to keep eyes out for more help on the defensive front.

Roster management has turned into a delicate balance of wide-ranging issues for major college coaches since the addition of the transfer portal, name, image and likeness legislation and other factors. According to one report, as many as 6,600 college football players had been in the portal as of this spring.

The Razorbacks have had their share of comings and goings in the last year with 23 known players entering the portal and seven players transferring onto campus. Defensive end Dorian Gerald, who is one of the 23, was injured each of the last three seasons and his eligibility is exhausted unless he is granted a seventh season as a collegian.

Hampton and former Georgia Tech defensive lineman Jordan Domineck are expected to be on campus this summer.

Arkansas had two players enter the portal and then withdraw their name in quarterback Malik Hornsby and offensive lineman Jalen St. John.

In other roster news, the status of offensive lineman Terry Wells, who did not participate in spring drills due to a back issue, is still pending. Pittman said a decision would have to be made at some point on whether he had surgery on the back or not.

Offensive lineman Dylan Rathcke, who also sat out spring drills, has received a medical hardship, meaning his scholarship will be honored but it will not count toward the NCAA maximum of 85 allowed for the Razorbacks.

Also, the UA will extend scholarships to a trio of former walk-ons: tight end Nathan Bax, wide receiver Harper Cole and linebacker Jackson Woodard, a source with knowledge of the moves told the Arkansas Democrat-Gazette.