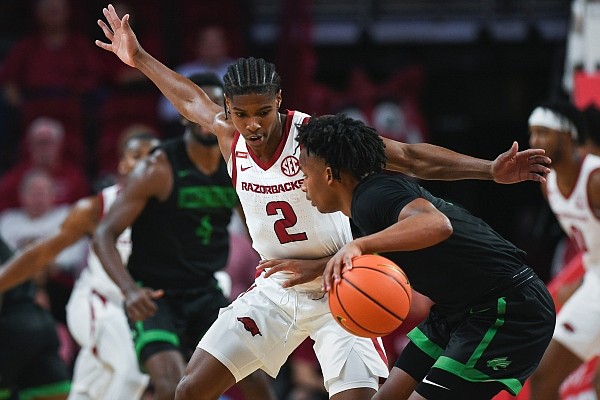 Former Arkansas guard KK Robinson is transferring within the SEC.

Robinson, who played two seasons with the Razorbacks, committed to Texas A&M on Sunday, he announced in a post to his Instagram account. He entered the NCAA transfer portal on April 1.

The guard is the second former Arkansas player in as many offseasons to commit to Coach Buzz Williams and the Aggies out of the portal. Forward Ethan Henderson, a former standout at Little Rock Parkview, did so in 2021.

Robinson played in 11 games before having season-ending foot surgery as a freshman to repair a fracture in his right foot. He saw time in 19 games and started two last season, averaging 1.5 points in 4.8 minutes per game.

“The entire program wishes KK the best at Texas A&M and wants to thank him for all of his contributions to Razorback Basketball,” Arkansas Coach Eric Musselman said in a text message. “The last two years KK brought incredible toughness and competitiveness. He’s got a bright future ahead.”

Robinson is the third transfer to commit to the Aggies this spring, according to the 247 Sports transfer tracker. He joins Andersson Garcia of Mississippi State and Julius Marble of Michigan State.

All three Razorbacks on the 2021-22 roster who opted to transfer from the program after last season – Chance Moore, Connor Vanover, Robinson – have committed to new programs. Moore is headed to Missouri State, and Vanover committed to Oral Roberts last week.

Robinson was an ESPN 4-star recruit in Arkansas’ heralded 2020 class.

He signed with the Razorbacks over Florida, Texas A&M, Kansas, TCU, Illinois, Oklahoma, Vanderbilt and other programs after playing at prep powerhouse Oak Hill Academy.