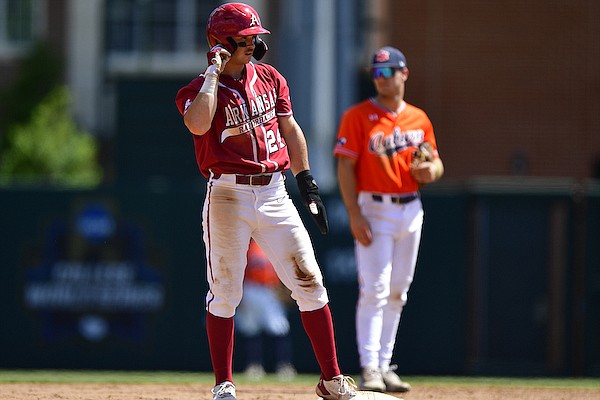 Arkansas center fielder Braydon Webb (24) stands at second base during a game against Auburn on Sunday, May 8, 2022, in Auburn, Ala. (Matthew Shannon/Auburn Athletics)

With an RPI and strength of schedule lower than usual this time of year, Arkansas needed a resumé-building win at Auburn this week.

The Razorbacks got it Sunday with a 7-4 victory over the Tigers. Arkansas, which won 11-8 on Friday and lost 5-3 on Saturday, notched its biggest series win of the year because of who the Razorbacks beat and where it happened.

Auburn’s No. 18 ranking in the USA Today Baseball Coaches Poll is a bit misleading. Coming into the weekend the Tigers were projected as the No. 6 national seed for the NCAA Tournament by D1Baseball.com, and Auburn had the nation’s fourth-highest RPI.

That RPI will fall after a home series loss, but the Razorbacks’ RPI should receive a jolt after beating a good opponent twice on the road.

According to WarrenNolan.com, Arkansas’ RPI jumped from 28th to 22nd this weekend, but the final ranking could fluctuate based on games that had yet to be decided.

The Razorbacks’ strength of schedule also improved several spots to 62nd this week and should only go up with series against Vanderbilt and Alabama, and games at the SEC Tournament remaining.

Bottom line: Arkansas put itself in a great situation by taking a road series against a strong team.

The Razorbacks are likely close to locking up another regional host bid, but a fourth consecutive top-eight seed is a goal for Arkansas. That would ensure a super regional at Baum-Walker Stadium if the Razorbacks win their regional.

Since the NCAA adopted its current tournament format in 1999, no team with an RPI of higher than 19 has been a top-eight seed.

Arkansas improved to 5-2 this season in the rubber game of a series.

The Razorbacks won decisive Game 3s against Illinois State and Southeastern Louisiana in nonconference play, and in SEC series against Missouri and Ole Miss prior to Auburn.

Arkansas’ two rubber-game losses were not well played, but were close games. The Razorbacks lost 9-7 at Florida and 11-10 at Texas A&M.

In both losses, Arkansas had errors that contributed to the decisive runs.

Van Horn was pleased with the energy his team had at the beginning of Sunday’s game. He called his players “chirpy” and said he was OK with it.

“I was glad they brought some energy,” Van Horn said, "and it was fun to be a part of.”

Before traveling to Auburn, Van Horn told the Swatter’s Club that he would stick with Jaxon Wiggins in the starting rotation.

Wiggins delivered his best start since the early portion of the SEC schedule. He held Auburn to 1 earned run and 4 hits, and struck out 6 in 5 innings.

Perhaps the most important number for Wiggins was two walks. He has struggled with command throughout the season, but especially in his two previous starts when he walked six in 3 1/3 innings of combined work against Texas A&M and Ole Miss.

It appeared it might be another short start for Wiggins at Auburn, but he bounced back from a 29-pitch first inning that included an error and three two-out hits, including a home run.

Van Horn said the error made Wiggins throw 15 more pitches than he should have in the inning. He threw just 61 pitches over the final four innings.

“I thought he had really good body language, even when we made an error behind him,” Van Horn said. “He didn’t show any emotion toward his teammate or feel sorry for himself. He just got back up on the mound and did a great job there. He’s worked really hard. Obviously I said earlier he’s been frustrated. He wants to help the team win. He did everything we wanted him to do today. He threw (90) pitches, went five innings and held a really good offensive team to three runs. That’s a really good job.”

Will McEntire had never pitched in an SEC game prior to Sunday.

The third-year right hander from Bryant had his true freshman season cut short due to the covid-19 shutdown in 2020, redshirted last year and has been used as a midweek starter during the back half of this regular season.

But Arkansas’ coaches had a plan to get him into the series finale, which is why he threw only 50 pitches in his start against Missouri State five days earlier.

McEntire responded in an impressive way. He retired nine of the first 10 hitters he faced and pitched scoreless sixth, seventh and eighth innings.

Auburn had two hits against McEntire in the ninth inning and scored a run charged to him after reliever Evan Taylor replaced him.

“Will McEntire came in and did exactly what we were hoping he could do — give us three innings, maybe more,” Van Horn said. “I think he might have just run out of gas. Maybe we threw the wrong pitch.”

McEntire has a 2.25 ERA, 1.15 WHIP and .176 batting average against in 20 innings this season. With no more midweek games scheduled, he should provide Arkansas with another good bullpen arm for the remaining regular-season games.

McEntire and Taylor polished off a strong weekend for the Razorbacks’ bullpen, which held Auburn to 6 earned runs, 11 hits and 3 walks in 13 innings.

Arkansas scored 11 runs in 15 2/3 innings against the Tigers’ relievers.

Aside from winning the series, the story of the weekend might be the overall success of Arkansas’ lineup.

The Razorbacks’ finished the series with 21 runs and 26 hits. Arkansas also drew 15 walks and was hit by a pitch six times.

The Razorbacks hit four multi-run home runs during the series, including three-run home runs by Robert Moore, Kendall Diggs and Braydon Webb. But unlike last week’s series against Ole Miss when all of Arkansas’ runs were due to homers, the Razorbacks had key singles and doubles at Auburn.

Arkansas also produced some situationally, such as Sunday when Jalen Battles had 2 RBI on a fielder’s choice groundout and a sacrifice fly.

Auburn entered the series with similar pitching numbers to the Razorbacks’ last two weekend opponents, Texas A&M and Ole Miss, but the Tigers’ were without two of their top arms, starter Hayden Mullins and closer Blake Burkhalter.

Arkansas had its most success against the Tigers’ best starter, statistically speaking, right hander Joseph Gonzalez, who allowed 5 runs and 9 hits in 2 2/3 innings Sunday. It was the first time Gonzalez failed to pitch at least six innings in an SEC start.

Gonzalez had pitched at least seven innings in his four previous starts against Vanderbilt, Mississippi State, South Carolina and Tennessee, and pitched a complete game against the Commodores.

“It just seemed like we were seeing it good,” Van Horn said. “We laid off some borderline pitches early in the count and, man, when we got a pitch to hit, we hit it good. They saw that, too. That’s why they got him out of there.”

Auburn coach Butch Thompson said Joseph fell behind in too many counts.

The Razorbacks’ weekend also included a three-hit game Saturday. Before Sunday’s game, Van Horn noted hard-hit balls by Brady Slavens and Moore that were caught but could have changed the game.

“That’s how the game works,” Van Horn said on the Razorbacks’ pregame radio show. “You hit some hard, they’re caught, and you hit some soft that aren’t. It’s kind of a fickle game and sometimes it’s not fair.”

Arkansas committed six errors in the series, including three during Sunday’s finale.

Battles, the shortstop, had two errors Sunday and three during the series.

Despite the struggles, the Razorbacks’ defense also made several key plays, none bigger than the double play turned by Battles and Moore at second base to end Sunday’s game. It came six pitches after Battles committed an error and Auburn pulled to within 7-4.

“I guarantee you, in his mind, he's thinking, 'Please hit me a ball. Hit it to me,’” Van Horn said. “If you're an infielder, and you're thinking, 'Don't hit it to me,' you better go play outfield. That's the way I look at it.

“I told the team after the game that's where I was hoping they would hit one. I'm thinking, 'Hit Battles one more. He's not going to miss this one.' Ball left the bat and it was headed to him, I was feeling pretty good.”

The Razorbacks entered the series with a .985 fielding percentage that ranked second nationally. The percentage fell to .982 during the series.

DiChiara hit solo home runs Saturday and Sunday, but finished the series 2 for 10 with 3 walks and 7 strikeouts. He entered the series with a .436 batting average.

“They just did a great job,” Van Horn said. “I think they got him guessing a little bit, a little frustrated; just pitched him well. What can you say? If we made a mistake or threw it over the plate a little bit, he hammered it. He did that twice, but other than that we pitched him really good.”

For the second consecutive week, Arkansas exits the weekend with a two-game lead in the SEC West.

The Razorbacks are two games ahead of Texas A&M and LSU with six regular-season games remaining. Auburn is three games back.

The Aggies, who own a tiebreaker over Arkansas, had pulled to within one game of the division lead during the weekend, but fell back with a 9-4 loss to South Carolina on Sunday.

Arkansas, Auburn, Texas A&M and LSU are all projected to host regionals by D1Basbeall.com. That should dispel any thought the SEC West is down because of poor seasons for division heavyweights Mississippi State and Ole Miss.

With two victories this week, Van Horn passed Mike Gillespie in career wins, according to the NCAA record book.

Gillespie, who retired in 2018, won 1,156 games in 31 seasons at Southern Cal and UC Irvine. He won a national championship at USC in 1998 and coached in the College World Series five times.

Van Horn has 1,157 victories recognized by the NCAA, which includes his 28 seasons as a Division I coach at Arkansas, Nebraska and Northwestern (La.) State, as well as his national championship season at Division II Central Missouri.

Van Horn ranks 38th in career victories, according to the NCAA record book, but could soon catch four others. That includes his mentor, former Arkansas coach Norm DeBriyn, who won 1,161 games in 33 seasons with the Razorbacks.