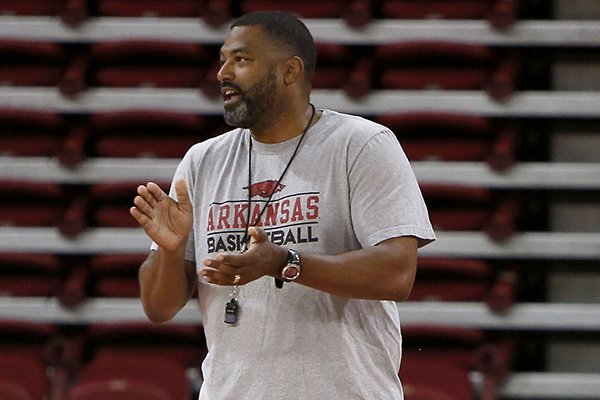 Arkansas student assistant coach Lee Mayberry watches practice Tuesday, Oct. 7, 2014, at Bud Walton Arena in Fayetteville. Mayberry will graduate from the University of Arkansas on Saturday, nearly 27 years after enrolling at the school.

Mayberry on Monday was announced as the boys basketball coach at Cascia Hall Preparatory School in his hometown of Tulsa. According to the Tulsa World, he will also serve as the school’s dean of students.

Mayberry, 51, spent the previous four seasons as an assistant coach for Oral Roberts' women's basketball team. He left former Arkansas coach Mike Anderson’s staff in 2018 and joined the Golden Eagles’ program to be alongside two of his daughters, Taleya and Maya.

Mayberry’s only prior high school coaching experience came in 2017-18 at Watson Chapel High School in Pine Bluff. Before that he was a volunteer assistant and special assistant to Anderson from 2014-17.

“I’m very excited,” Mayberry told the Tulsa World. “Watson Chapel was a fun experience. I’m looking forward to the challenge of running my own team. That’s always been in the back of my mind, whether it was high school or college, on the men’s side or women’s side. It’s basketball.”

Mayberry was a four-year starter at Arkansas from 1988-92 and guided the Razorbacks to four conference titles and the 1990 Final Four.

Mayberry played seven seasons in the NBA and was a scout for the Golden State Warriors from 2009-14.