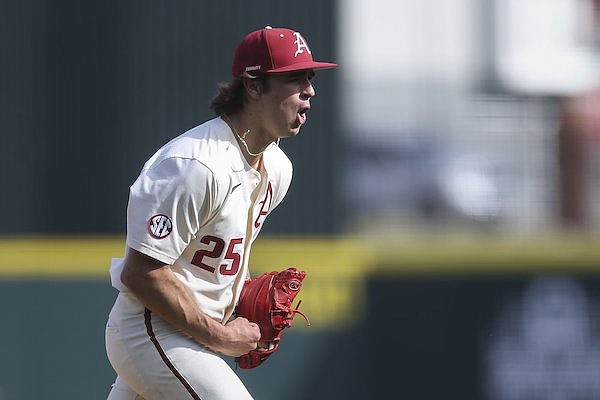 Arkansas pitcher Brady Tygart walks toward the dugout during a game against Mississippi State on Sunday, April 3, 2022, in Fayetteville.

FAYETTEVILLE — The pivot point of last weekend’s series at Auburn, as University of Arkansas pitching coach Matt Hobbs saw it, came in the sixth inning of Friday night’s opener.

The Tigers, who led 5-0 through four innings, had scored in three consecutive innings when left-hander Evan Taylor came in for Kole Ramage moments after Jace Bohrofen’s two-run homer had drawn the Razorbacks within 6-4.

Arkansas needed some shutdown innings to give its offense space to operate against an Auburn bullpen that was minus closer Blake Burkhalter.

Taylor threw scoreless innings in the sixth and seventh, and the Razorbacks rallied for seven runs in that span to seize a commanding 11-6 lead before he handed things over to closer Brady Tygart.

“I realize the offense did just an outstanding job, but he gave them a little bit of courage by coming in and throwing some zeroes up.”

Hobbs saw a flashback to the work of 2021 SEC Pitcher of the Year Kevin Kopps in Taylor’s performance.

“I’m not saying this is the same, but we’d do that all the time with Kevin last year,” Hobbs said. “We’d be down one or two runs, and put him in, and we knew we’d get zeroes, and he’d give momentum to our offense.

“When Jace hit that home run, that kind of felt like if we just throw a couple of zeroes up here … all we needed was just to slow them down a little bit. Evan Taylor was the pitcher that flipped that game for us.”

The bullpen wasn’t perfect for Arkansas against Auburn — but it played key roles in wins on Friday and Sunday as the Razorbacks (36-12, 16-8 SEC) maintained their two-game lead in the SEC West.

The Razorbacks and their evolving bullpen will get back at it at 6:30 p.m. Friday to start a three-game series against No. 21 Vanderbilt at Baum-Walker Stadium.

Arkansas relievers were called on for 14 innings — five on both Friday and Saturday in relief of Connor Noland and Hagen Smith — and four behind Sunday’s winner Jaxon Wiggins (6-1), the lone Razorback starter to pick up a decision against Auburn.

While Taylor and Tygart have been known commodities all season for the Arkansas relief unit, along with others like Ramage, Zebulon Vermillion, and Zack Morris. Sophomore Will McEntire provided another dimension to the bullpen roster with his work in Sunday’s 7-4 win.

Making his debut in an SEC game, the right-hander from Bryant threw three shutout innings behind Wiggins before running into a bit of trouble in the ninth. McEntire, who did not pitch in 2021 after compiling a 1.13 ERA in 8 innings over 2 games during the covid-shortened 2020 season, displayed four pitches to keep Auburn off balance.

Hobbs said Coach Dave Van Horn’s foresight during a 6-4 loss to Missouri State last week set the wheels in motion for McEntire’s sparkling SEC debut. McEntire started the game against the Bears but came out at Van Horn’s insistence after allowing 2 runs in 3 innings on 50 pitches. After the game, Van Horn mentioned that McEntire, who had been pitching well since his season debut on April 12 in a 6-0 win over Arkansas-Pine Bluff, could factor in on Sunday.

“Coach Van Horn was like, ‘Don’t throw him more than 50 pitches against Missouri State. We’re going to need him on the weekend,’ and he was right,” Hobbs said.

“That’s what it was honestly. I was thinking about trying to fight for another inning against Missouri State and he said, ‘We are going to need him this weekend.’ He was 100% right. That’s why you listen to the hall of famer, right? You listen to the guy who’s been doing it at as high a level as he has for as long as he has.”

Hobbs said it was a coin flip on whether to call on McEntire or Morris in the sixth on Sunday.

“Their lineup is super right-handed and Will’s got a good mix, so I think everybody felt good about that,” Hobbs said. “But Zack’s been great. You can’t ask for anything more.

“I think he and Will are like a left- and right-handed version of each other. Guys with basically a three and a half or four-pitch mix. Both guys are going to be in that 90 to 93 [mph] range with a curveball, slider. Will’s is a cutter and Zack’s is a slider.

“Then Zack throws a split and Will throws a change-up. They’re just kind of mirror images of each other … which is great because it gives you an option for either one.”

Hobbs said McEntire came back from the covid shutdown, “kind of out of shape and complacent” and wisely accepted a challenge to re-commit to himself, which led to a decent summer in the Northwoods League.

Still, McEntire was behind a number of pitchers and not on the travel roster early this season until a bullpen session in April.

“The last time he threw indoors we’re sitting back there watching, in addition to how he was attacking hitters, we’re looking at some of the TrackMan stuff we’re getting and we’re like, ‘Wow!’ ” Hobbs said. “It was a little bit harder, like 92 [mph] instead of 88. Cutter’s hard again. His curveball’s gotten in better shape.

McEntire started and won the UAPB game, pitched well in a win over Arkansas State, then delivered a career-high 6 innings closer to the home folks in a 2-1 win over the University of Central Arkansas in North Little Rock on April 26, setting in motion his rise.

Hobbs said he thinks the pitching staff is in shape for the stretch run with both starters and relievers grasping their roles.

“Everybody’s healthy for the most part, so I feel real good about what we’ve got,” he said. “I think when you really start to look at the bullpen globally and who’s in there, you’ve got power at the back in Evan and Brady, so you’ve got a power lefty with a good slider and a power righty who’s in the mid 90s with two really good breaking balls. There’s obviously toughness in those two kids.

“Then you’ve got like two of the same with a lefty and righty in Morris and McEntire that are kind of mirror images of each other. Then you’ve got some power stuff with Zeb, who can come in and throw you a 96 to 98 mph fastball, maybe better on some days, and his slider has gotten a lot better.

“Then you’ve got Kole who comes in and just spins breaking balls to death if he has to or the fastball has gotten better. He’s in that 90 to 93 range, too. That’s six guys right there that I just mentioned and that’s not everybody. That’s six arms.”