Strength of Tide on minds of Razorbacks 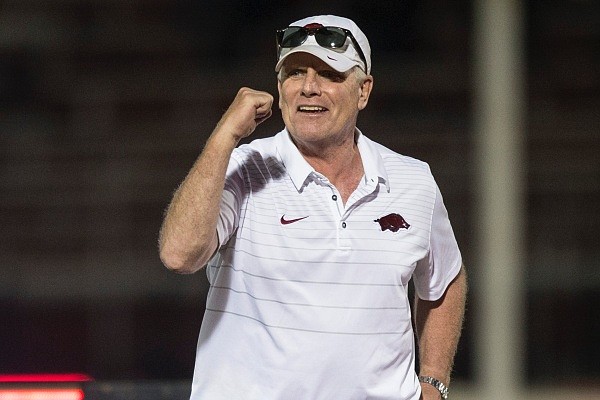 Bucknam, coach of the University of Arkansas men’s cross country and track and field teams, is referring to Alabama’s power in the shot put, discus and hammer.

The Crimson Tide have the conference leaders in the shot put in Isaac Odugbesan (53 feet, 4 1/2 inches), the discus in Alan de Falchi (67-9 1/2) and the hammer in Kieran McKeag (234-8) going into the SEC Outdoor Championships, which will be held today through Saturday in Oxford, Miss.

Based on the top conference marks this season, Alabama is projected to score 47 points in those three events, a key reason the Tide are ranked No. 2 nationally and favored to win the SEC title.

“We’ve won five in a row when you count cross country, and indoor and outdoor track, but Alabama looks pretty tough,” Bucknam said. “They’re going to jump on the whole conference with their throws crews and score a lot of points in the discus, and the hammer and shot put.

“The rest of the meet is probably going to be really tight, but those three events, it’s going to be hard for us or anybody else to overcome that.

“We’re not ruling out that we can’t [overcome Alabama], and stuff happens. That’s why you have the meet. I love how competitive our team is. But on paper, Alabama is the clear favorite right now.”

Arkansas senior Amon Kemboi is the SEC leader in the 10,000 meters, but rather than run that event, he’ll double in the 1,500 and 5,000 to maximize scoring opportunities.

The Razorbacks will load up in tonight’s 10,000 with Patrick Kiprop, Jacob McLeod, Myles Richter and Ryan Murphy. Emmanuel Cheboson and Andrew Kibet will go in the 3,000-meter steeplechase Friday night.

Several runners then likely will come back in the 5,000 on Saturday depending on how the team race shapes up going into the meet’s next-to-last event.

Arkansas sophomore Ayden Owens, who earlier this year set a collegiate record in the decathlon with 8,528 points, will compete in the 110-meter hurdles at the SEC meet along with running on the 400- and 1,600-meter relays.

Owens and Garland — who won’t compete at the SEC meet after the grueling USA event — will go head-to-head in the decathlon at the NCAA Championships.

Owens’ ability to run on the relays at the SEC meet is vital for the Razorbacks because James Benson, their top 400 runner who would have run on both relays, is out with a hamstring injury and will redshirt the outdoor season.

“I really think Ayden makes both of our relays pretty competitive,” said Arkansas assistant Doug Case, who coaches the sprinters. “Because he is one unbelievable athlete.”

Bucknam said Arkansas needs big points from Phillip Lemonious and Tre’Bien Gilbert in the 110-meter hurdles and John Baker and Ryan Brown in the long and triple jumps.

With Owens and Garland not competing in the decathlon, Razorbacks Daniel Spejcher and Noah Swamby — who rank No. 4 and No. 6 in the conference — could move up into high scoring positions at the SEC meet. Last year Spejcher took third at the SEC meet with 7,479 points.

“Where we have our strengths, we have to flex our muscles,” Bucknam said.