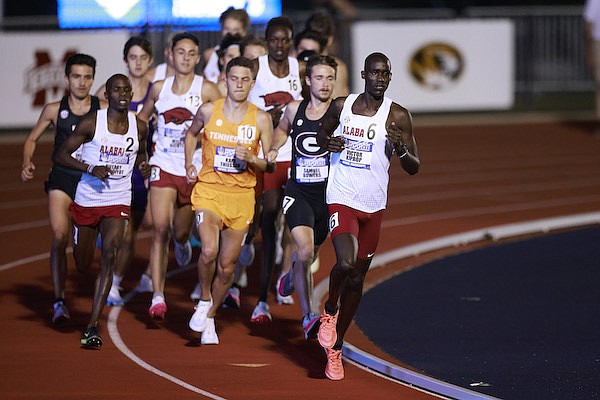 Alabama's Victor Kiprop leads the pack in the men's 10,000 meters during the SEC Outdoor Championships on Thursday, May 12, 2022, in Oxford, Miss. (Photo courtesy University of Alabama Athletics, via SEC Media Portal)

The 10,000 meters Thursday night at the SEC Outdoor Track and Field Championships in Oxford, Miss., came down to a battle of Kiprops.

Both Kiprops are from Kenya — Patrick from Eldoret and Victor from Iten — but they are not related.

Patrick Kiprop took the lead with 800 meters to go, but Victor Kiprop ran the final 400 in 56.4 seconds to pull away for the victory.

The Razorbacks scored 16 points in the 10,000 — with sophomores Myles Richter finishing third in 20:29.38 and Jacob McLeod seventh in 30:03.22 — and are third in the team race through three finals being scored.

Alabama leads the men’s team race with 29 points. Georgia is second with 17 points.

The Razorbacks are in fifth place in the women’s team race through three finals scored.

Arkansas sophomore Britton Wilson ran 54.23 in the 400-meter hurdles to break her own school record, improve her collegiate-leading time for this season and lead all qualifiers into the final. It ranks No. 8 on the all-time collegiate list.

Wilson, who transferred to Arkansas this year from Tennessee, ran her old UA record of 54.37 at the Texas Relays to open this season.

Arkansas junior Daniel Spejcher is third through five of the decathlon’s 10 events with 3,998 points.

Razorbacks junior Noah Swaby is ninth in the decathlon with 3,677 points.

Arkansas sophomore Leroy Russell ran a personal-best 1:47.86 in the 800 to advance to the final.

Razorbacks freshman Connor Washington ran a personal-best 20.60 to advance to the 200 final.