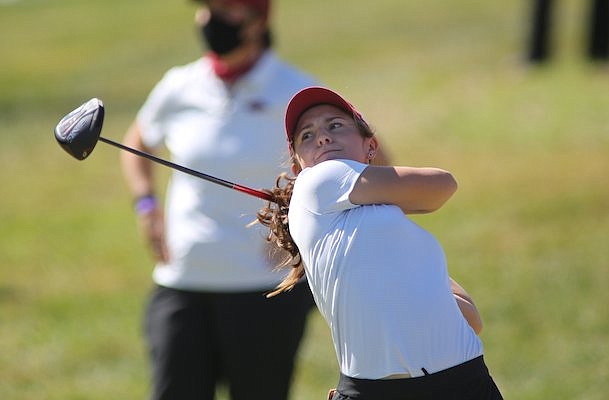 The University of Arkansas women’s golf team made a lineup change and had one golfer turned in a solid round, but it could not prevent the Razorbacks from sinking farther on the second day of the NCAA Championships on Saturday in Scottsdale, Ariz.

The Razorbacks turned in a 17-over 305 on the Raptor Course at the Grayhawk Golf Club and dropped to 22nd place among the 24 teams. Julia Gregg led the way with a 1-over 73, but no other Razorback shot better than 75.

Arkansas, which teed off on No. 10 in the afternoon round, is at 36-over, nine shots out of the top 15, where the cut will be made after today’s third round.

Arkansas freshman Giovanna Fernandez, who traveled as the alternate, took the spot held by Miriam Ayora and shot a 7-over 79 that included five bogeys and a double bogey. It was a counting score because freshman Ffion Tynan shot 80.

The Razorbacks’ other counting scores came from junior Ela Anacona with a 75, with three birdies, and junior Kajal Mistry, who shot 78 with a closing birdie.

Gregg made the turn at 2 under, with a trio of birdies and one bogey, but she dropped three shots on the back nine. She is tied for 19th, Mistry is tied for 56th and Anacona is tied for 94th.

No. 1 Stanford, playing in the morning group, carded a 4-over 292 and maintained its lead at 5 over for the tournament.

Stanford’s Rose Zhang fired a 2-under 70 to hold a 4-shot lead in the individual standings over Auburn’s Megan Schofill and Virginia’s Beth Lillie heading into the third round.

Oregon is in second place at 9 over, four shots back, while Auburn and UCLA are at 10 over, followed by LSU at 11 over. The Ducks shot an even-par 288 on Saturday, the only even par round of the tournament.