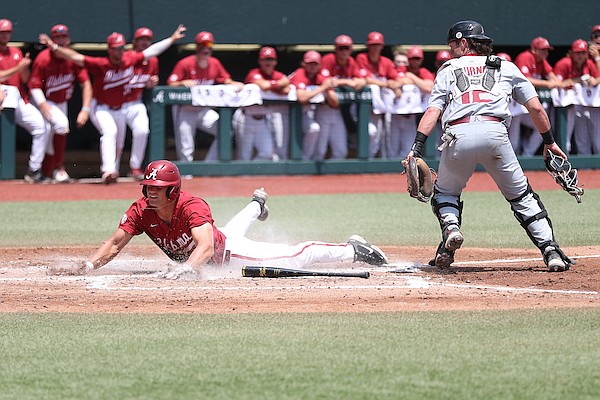 With another SEC West Division baseball crown in their sights in Saturday’s regular-season finale, the Arkansas Razorbacks got off to a quick start, then collapsed in a heap in their worst combined pitching and fielding game of the season.

Alabama took advantage of the Hogs’ cascade of walks, hits, hit batters, wild pitches and mental and physical errors to erupt for a pair of six-run innings and assaulted the No. 5 University of Arkansas 18-5 before a crowd of 3,109 at Sewell-Thomas Stadium.

“It was really just a total bad game on our part,” Arkansas Coach Dave Van Horn said. “What can you say? It didn’t look good, that’s for sure.”

The Razorbacks, who had led the SEC West from the start of conference play up through Friday, could not claim their fourth consecutive division title. They dropped to second behind Texas A&M (19-11), which routed Ole Miss 12-6 on Saturday.

Arkansas earned the No. 3 seed for the SEC Tournament and will play in Wednesday’s 9:30 a.m. opener between the winner of 6 seed Georgia vs. 11 seed Alabama from Tuesday’s single-elimination round.

The Razorbacks lost their final two series of a season for the first time since 2016 and dropped a set to Alabama for the first since being swept at home on May 13-15, 2016.

“I don’t know where this has been all year,” Alabama Coach Brad Bohannon said. “But to put up a 6, a 6 and a 5 against Arkansas, who I think is leading the league in pitching or is in the top two or three, it just doesn’t make sense. This conference is really something.

“I’m really happy for our kids. This is a great way to finish up our home schedule.”

The team that scored first lost all three games in the series.

The Razorbacks scored two runs in the first inning off left-hander Grayson Hitt on one-out singles by Chris Lanzilli and Jalen Battles, but left two runners on base in each of the first four innings.

Alabama blew up in the second inning against Arkansas starter Jaxon Wiggins (6-3) with two walks and two hits before Wiggins threw wildly on a squeeze play at home. Kole Ramage cam on in relief and gave up a walk, an RBI groundout and Andrew Pinckney’s run-scoring double to complete the six-run inning.

The Crimson Tide made it 7-2 in the third without putting a ball in play on two walks, a hit batter and a run-scoring wild pitch. They then put the game out of reach with six more runs in the fourth on William Hamiter’s home run followed by a series of hits, walks, hit batters and errors.

“It’s disappointing that we came out and couldn’t throw the ball over the plate, got behind in the count,” Van Horn said. “I think we walked 11, hit three more, made a couple of routine bobbles in the field that could have probably kept another couple runs off.”

“It’s been the last couple of weeks and we’re behind, we’re throwing balls, we’re getting hit,” he said. “Yeah, there’s a lot of concern there. Just disappointed with, really, two out of three starts this weekend.”

The Razorbacks equaled Alabama’s hit total of 11 but drew only 4 walks compared to the Crimson Tide’s 11.

The Razorbacks were charged with two errors — on Wiggins and first baseman Brady Slavens — but third baseman Cayden Wallace could have been charged with one on a ground ball which he fielded but lost control of on the transfer when he was eyeing a tag play at home.

“They didn’t walk us and hit us, and they didn’t make an error,” Van Horn said. “That separated the game.”

Nine-hole hitter Bryce Eblin hit a grand slam against Miller Pleimann to complete a five-run Alabama fifth and cap the Tide’s scoring with an 18-3 lead.

Arkansas was led by Braydon Webb, who went 3 for 4 with 2 runs and 2 RBI while hitting in the two hole for the sixth time this season.

Arkansas used eight pitchers and only Evan Taylor, Zack Morris and Gabriel Starks did not allow an earned run.