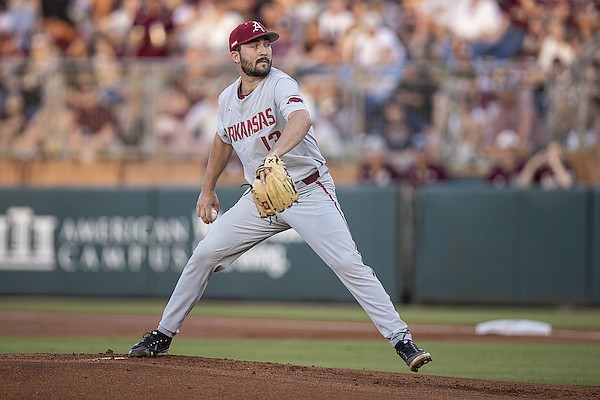 FAYETTEVILLE — Four Arkansas baseball players were recognized for their play during the regular season, the Southeastern Conference announced Monday.

Razorbacks pitchers Brady Tygart and Hagen Smith were named to the All-SEC freshman team, and second baseman Robert Moore and starting pitcher Connor Noland were selected to the All-SEC defensive team. Arkansas did not have a player on the All-SEC first or second team.

Noland, a Greenwood native and the Razorbacks’ usual Friday night starter, has not committed an error in the field in 14 starts. He is 5-4 this season and owns a 3.75 ERA in 81 2/3 innings.

Moore will enter this week’s SEC Tournament with a .995 fielding percentage and only one error in 204 chances. He has had a hand in 38 of Arkansas’ SEC-best 47 double plays turned this season. Shortstop Jalen Battles is second with 31.

It is the second consecutive season in which Moore has been named to the league’s defensive team.

Tygart blossomed into a go-to arm in the Razorbacks’ bullpen in the regular season. He has 8 saves and a 2.12 ERA in 34 innings, and he held opponents to a .191 batting average.

The Mississippi native has given up three extra-base hits this season and is four saves shy of tying the single-season program record for a freshman.

Smith heads into his first postseason at Arkansas with a 6-2 record and 4.93 ERA in 14 appearances, including 13 starts. He made his first relief appearance last weekend at Alabama.

The left hander is tied for the team lead with six wins and has 72 strikeouts in 65 2/3 innings pitched.

The Razorbacks are one of three teams with multiple players on the conference’s freshman team and one of two programs with more than one player on the defensive team.

Arkansas is scheduled to begin play at the SEC Tournament in Hoover, Ala., on Wednesday at 9:30 a.m. The Razorbacks will play the winner of No. 6 seed Georgia and No. 11 seed Alabama.