Eyes on Bogle: Arkansas, Texas meet with OKC trip on the line 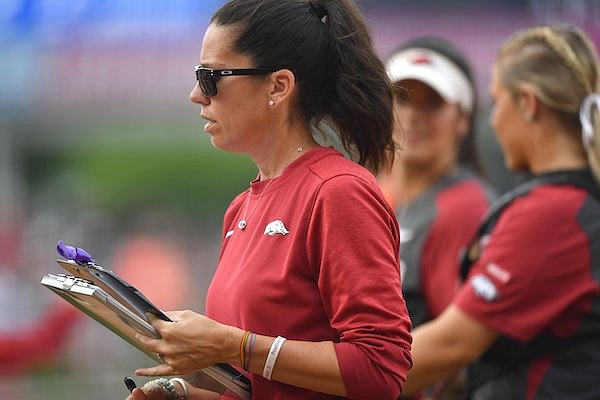 Arkansas coach Courtney Deifel speaks with her players Friday, May 20, 2022, during the fourth inning of the Razorbacks' 11-0 run-rule-shortened win over Princeton at Bogle Park in Fayetteville.

FAYETTEVILLE — Back in the old Southwest Conference days, anytime Texas made a visit to the University of Arkansas, the event was usually a big deal with championships on the line.

Even though the SWC is just a distant memory now for both universities, the importance of this weekend’s NCAA Super Regional softball tournament is just as large. The winner of this weekend’s series will punch its ticket to the Women’s College World Series in Oklahoma City next week.

Arkansas, the No. 4 national seed in the NCAA Tournament, is coming in off a three-game sweep of the Fayetteville Regional last week. The Razorbacks (47-9) dispatched Princeton and Oregon twice to claim the championship.

Texas won the Seattle Regional by knocking off host No. 13 Washington. The Longhorns (41-18-1) had to go to the second championship game to dispatch the Huskies, hanging on for a 3-2 win.

Texas third-year Coach Mike White has never coached a game in Fayetteville, but he said he is aware of the history of the rivalry.

“I don’t know that much about it,” said White, “but I’m hearing a lot more about it lately.”

Arkansas set a program attendance mark last weekend with more than 9,100 fans over the three days of the regional. Those numbers might pale in comparison to what this weekend’s crowd might bring to Bogle Park.

Today’s game marks only the seventh time the Razorbacks and Longhorns have met on the softball diamond, and the first since 2016. Texas owns a 6-0 series advantage.

“I’ve gotten to watch them play quite a bit,” Arkansas Coach Courtney Deifel said. “I just think they’re a very good team. They play with a lot of emotion and are really feisty. So I think we’re in for a really good battle.”

Texas was able to knock off Washington, a team that beat Arkansas twice early in the season, benefiting from a rare illegal pitch call late in its 3-2 win. With the game scoreless, Texas second baseman Janae Jefferson appeared to fly out to end the fifth inning. However, Huskies pitcher Gabbie Plain was called for an illegal pitch and Jefferson reached base on an infield single. After a walk, Texas centerfielder Belle Dayton blasted a two-run double to put the Longhorns up 2-0.

White said he’d only seen that type of illegal pitch called a few times, but added the addition of an umpire at second base last year has added an extra pair of eyes on the field.

“This was the first one I’ve seen for an out-of-the-lane violation by the second base umpire,” White said. “So it’s still relatively new in that regard. I did go back and view the pitch, and she was out of the lane. So it was the correct call.”

There is also a little recent history between the two programs as Arkansas catcher Taylor Ellsworth transferred from Texas after last season. Ellsworth is a big part of the Razorbacks’ offense this season with a .344 batting average and 14 home runs.

“I think the first initial feeling was just kind of anxious,” Ellsworth said when she found out Texas would be Arkansas’ super regional opponent. “I don’t think it’s a feeling that many people experience playing their old team. It’s just initially pretty anxious, but also it’s exciting.

“Like it’s the supers, and the winner of it’s going to the world series, so altogether you just have to be excited that we’re this far. I still have a lot of friends on the team, so it’s just kind of bittersweet.”

White said he did not think Ellsworth’s familiarity with the Texas players would be a big advantage for the Razorbacks since the two pitchers he will likely use were not on the team last year when Ellswoth was the team’s catcher. Texas will likely throw Hailey Dolcini (21-9, 2.21 ERA, 204 strikeouts) and Estelle Czech (11-1, 3.41 ERA).

The Longhorns have had an up-and-down season. They lost six straight games in an early season tournament in Florida, and were swept by Oklahoma State. But since that sweep, Texas is 9-3 after beating Washington twice last weekend.

White said the key for his team is to eliminate the big inning. Twice against Oregon, the Razorbacks scored six runs in the sixth inning to seize control of those games.

“You can’t let any team get a spread on you like that,” White said. “We did that against Washington. Arkansas is one of the best home-run hitting teams in the country. Them and Oklahoma are neck and neck in that regard, but they also have some speed and they run the bases well. They are aggressive and they are truly a deep team with a lot of talent.”

Arkansas bashed four home runs in its 9-3 win against Oregon that clinched the regional. As a team, the Razorbacks have launched 109 homers with five players having 13 or more. Texas has just one player with 10 home runs, but the Longhorns can put pressure defenses with bunts and working walks. Jefferson leads the team with a .425 average and has 16 stolen bases. Mia Scott leads the team with 23 steals and is batting .380.

Linnie Malkin leads the way for Arkansas with 22 home runs and Danielle Gibson is batting .445 with 20 homers and a team-best 69 RBI.