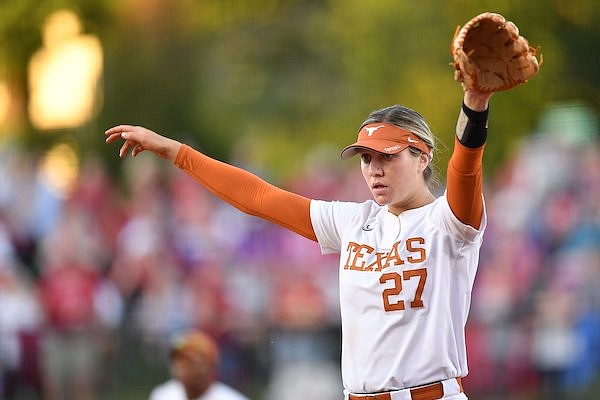 Texas pitcher Hailey Dolcini celebrates Friday, May 27, 2022, as she comes off the field after the final out of the Longhorns' 3-1 win over Arkansas in the NCAA Fayetteville Super Regional at Bogle Park.

FAYETTEVILLE — Hailey Dolcini walked to the back of the pitching circle, shaking her right arm and prompting a visit from Texas Coach Mike White.

With the University of Arkansas threatening to take control of Friday’s second game of the NCAA Fayetteville Super Regional softball series, White went to check on his ace right-handed pitcher, who has been a workhorse in the postseason for the Longhorns.

Dolcini assured her coach she was fine, then went out and mowed through the Arkansas lineup, retiring 13 of the final 14 batters she faced in a 3-1 win at Bogle Park that tied the super regional at 1-1.

The winner-take-all third game will be played at 3 p.m. Saturday with the winner advancing to the Women’s College World Series at Oklahoma City next week.

“Being a pitcher myself, I know the signs,” White said. “I saw her out there shaking her arm, I think it was the third inning and I thought, ‘This doesn’t look too good.’ So I’m aware of it. I’m looking for things like that. I’m not going to take the ball out of Hailey’s hands until she tells me to.”

Arkansas (48-10) took a 1-0 lead in the third inning when KB Sides worked a one-out walk and Taylor Ellsworth legged-out an infield single with two outs, putting runners at the corners. Arkansas first baseman Danielle Gibson crushed a Dolcini pitch down the first-base line that appeared to be headed for extra bases. Sides scored from third, but Texas first baseman JJ Smith was able to dive and knock the ball down, holding Gibson to a single and keeping Ellsworth at third.

That defensive play loomed big, but the inning was far from over.

Razorbacks third baseman Hannah Gammill and Dolcini had a duel for the ages with Dolcini whipping in pitch-after-pitch and Gammill fouling them off time and again. Finally after an epic 20-pitch battle, Gammill hit a hard liner up the middle, but Texas second baseman Janae Jefferson made a diving catch behind the bag for the third out, leaving the score at 1-0.

Winning that battle seemed to turn the momentum to the Texas dugout The Longhorns (42-19-1) took advantage, and knocked Arkansas starter Mary Haff out of the game in the process.

Texas nine-hole hitter Katie Cimusz took a 0-1 pitch from Haff over the wall in left for a solo home run. Then Jefferson followed by hitting a 1-1 Haff offering over the wall in center to give Texas a 2-1 lead, marking the first time Arkansas had trailed in NCAA Tournament play this season.

After an out, Alyssa Washington singled and that was the end of the day for Haff. Arkansas brought in Thursday night’s complete-game winner Chenise Delce, who gave up an RBI double to Mary Iakopo to make it 3-1.

“Katie got us going with that solo shot and I was just trying to copy her in a way,” Jefferson said. “I did the same thing with a pitch down the middle and took advantage of it and was able to take it out.”

After the third inning, Dolcini allowed one hit the rest of the way. She finished the game with 129 pitches and two strikeouts.

“You just go out there and try and hit the bad part of the bat and Hailey was able to do that,” White said. “I was just so proud of her to be able to fight through some soreness, but she’s a warrior. She doesn’t even want to think about coming out.”

Dolcini has thrown more than 200 pitches the past two games coming off a yeoman’s effort for Texas in the regional win over Washington, then in consecutive games in the super regional.

Jefferson, like Dolcini one of the “super seniors” on the Texas roster, said the Longhorns will go as far as their ace pitcher will take them.

“She’s our horse and we’re going to ride her until the wheels fall off,” Jefferson said.

Arkansas Coach Courtney Deifel, whose team had won nine straight games before Friday’s loss, said her team would bounce back, but credited Texas in the win.

“All in all not the result we wanted, but I just thought Texas was tougher than we were. They controlled their emotions a lot better,” she said. “What I saw from our team the last four innings just wasn’t us. But what this team has done all year is to answer, and there is a big opportunity to answer tomorrow.”