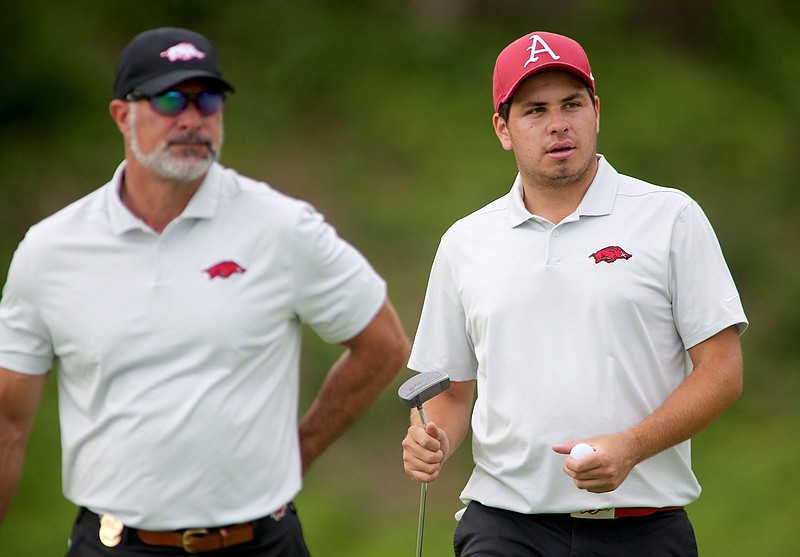 University of Arkansas men’s golf Coach Brad McMakin (left), shown with Julian Perico during a practice round for the 2019 NCAA Championship, said he feels the Razorbacks “got a real fair draw” as the No. 4 seed at the Kingston Springs (Tenn.) Regional. (NWA Democrat-Gazette/David Gottschalk)

FAYETTEVILLE — From the low point of not qualifying for match play at the SEC Championships, the University of Arkansas men’s golf team rallied its way to the NCAA Championships.

The Razorbacks finished fourth at the NCAA Columbus (Ohio) Regional to earn a spot in the field of 30 teams, who are set to tee it off today at Grayhawk Golf Club in Scottsdale, Ariz.

The Razorbacks, seeded No. 13 in the field, will have an afternoon tee time today at 3:20 p.m. and a morning tee time for Saturday’s second round on the 7,289-yard Raptor Course, a Tom Fazio design set in a corner of the Sonoran Desert.

“It’s going to be a great challenge playing against the best 30 teams in the country,” Arkansas senior Segundo Oliva Pinto said. “I’m very excited about it, and we’re really motivated.”

The Razorbacks were here last season, tying for 11th after making the cut to 15 teams.

McMakin said being in the morning round Sunday after the 36-hole re-pairings is critical because drier greens and the afternoon wind makes scoring more difficult.

“It doesn’t really matter the first two days because you’ve got to play one round in the wind,” McMakin said. “It’s the third round you really need to be in the top 15 because those schools will play in the morning.

In the NCAA women’s championship played at Grayhawk last week, only San Jose State from the afternoon round on Sunday advanced to the final 15.

“She said the course was in great shape, but it’s just difficult,” McMakin said. “The scores are high. It’s very firm and fast, and you’ve go to keep it in front of you. You can’t make any mistakes because the birdies are tough to come by there.”

Fernandez de Oliveira played at NCAAs last year as a member of the TCU team, along with Razorbacks’ Pinto and Perico.

“In college golf, there’s a lot of experience going in there,” McMakin said. “At SECs, we only had two guys who had some rounds there, so you’ve got three guys who’d never played there. Experience is important at these things and how these guys handle adversity.

“So I feel good we’ve got three guys who have played four or five rounds there and know the conditions. But I was really happy with what I saw the last two rounds at Ohio State. It’s the way we’d been playing in the fall and played some in the spring. Obviously the SECs was a little disappointing, but we bounced back in a good way. We hit the ball well.”

McMakin said the fairways have been pinched in on the Raptor Course by about 10 years on each side, making solid driving and staying on the fairways critical.

“And the greens are really firm,” he said. “If you’re coming out of the rough, you can’t stop it and there’s a lot of bunkering in front. You’ve got to carry the bunkers. So driving the ball good and keeping it in play are huge.”

A score of 25 over qualified for the final eight last season, meaning adversity is waiting around every dog leg.

“It’s definitely difficult,” McMakin said. “It definitely requires some patience. Birdies are hard to come by. Eliminate the mistakes and hopefully we putt good and we’ll be there.”