By: Arkansas Democrat-Gazette
Published: Saturday, May 28, 2022 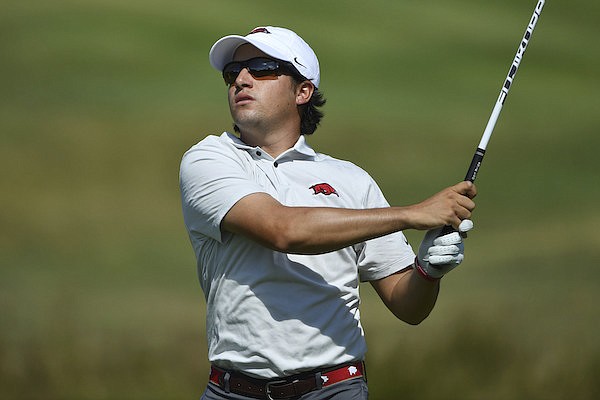 The University of Arkansas’ No. 14-seeded men’s golf team is tied for 14th place after shooting a 14-over 294 in Friday’s opening round of the NCAA Championships at Grayhawk Golf Club in Scottsdale, Ariz.

Arkansas’ Mateo Fernandez de Oliveira and Segundo Pinto were tied for 16th in the individual standings after shooting 1-over 71s on the par-70, 7,289-yard Raptor Course layout.

“I thought we did a great job,” Arkansas Coach Brad McMakin said. “It was really tough this afternoon. The greens were really firm. I thought the guys got off to a slow start today, but the guys really hung in there.

“The two rounds that Mateo and Segundo played, those 71s, were fantastic. I thought it was a great team effort and now we’ve got to go take advantage of tomorrow.”

Fernandez de Oliveira had the Razorbacks’ only birdie on the front nine, a 3 on the 520-yard par-4 18th. It was one of only three birdies yielded by the monster hole in the opening round.

The Razorbacks have not made the match play stage of NCAA Championships since the first year of the format in 2009, when they were national runners up to Texas A&M.