Brewer believes Hogs can get over hump in '23 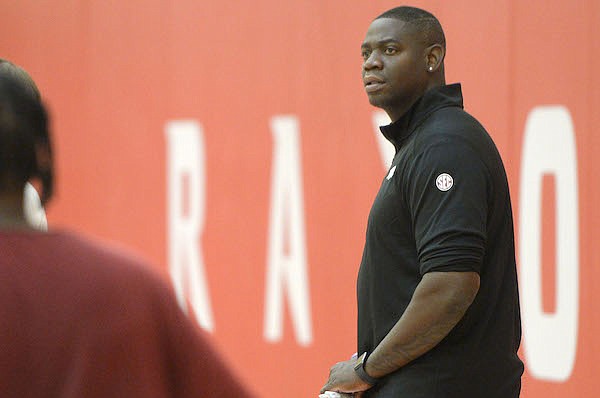 FAYETTEVILLE — Ronnie Brewer has been around high-level basketball for much of the last 20 years.

Arkansas basketball's second-year recruiting coordinator has never been a part of a film session longer than the one the No. 10 Razorbacks had after their 90-60 exhibition loss at No. 12 Texas on Oct. 29.

“We literally went possession by possession and stopped the clip every single time,” Brewer, the former Razorbacks guard, said Nov. 2 at the Hawgs Illustrated Sports Club. “You’ve got to give our players a pat on their back because they sat there, took the criticism, they’re coachable and learned from mistakes.

“Now we’re ready to put that behind us and move forward.”

Eric Musselman, entering his fourth season leading the Razorbacks, mentioned prior to the game against the Longhorns that preparation had not gone the way he envisioned based on personnel from NBA organizations dropping in to observe practices.

According to the Twitter account of Arkansas Basketball Recruiting, a total of five NBA teams attended workouts on Oct. 26-27. The clubs included the Oklahoma City Thunder, Los Angeles Clippers and Utah Jazz.

More from WholeHogSports: First episode of Basketball Podcast of Mid-America of the 2022-23 season

Jazz assistant general manager David Fizdale, who with the Golden State Warriors once served as an assistant coach alongside Arkansas' Keith Smart and under Musselman, was among the visitors at the Basketball Performance Center last week.

“I’ll put it like this,” Brewer said when asked how practices have gone since the exhibition loss, “up until Friday we’ve had open practices. We’ve had closed practices all this week. We’re getting after them a little bit, but at the same time it’s go-time.

“The regular season starts on Monday and we want to hit the ground running. There’s no doubt in my mind (the Texas game) was a great learning experience. I’m very happy it wasn’t nationally televised and that it didn’t count on our record.”

The Razorbacks trailed by three points with 3:03 remaining in the first half following a free throw from Wichita State transfer Ricky Council, but a 9-2 Texas run to close the half pushed Arkansas’ deficit to 40-30 at halftime. The Longhorns then opened the second half on a 7-0 run, widening their margin.

The knockout blow came during a 3:51 stretch in the second half in which Texas reeled off 20 unanswered points.

“In the second half we came out flat,” Brewer said. “That’s not characteristic of our team and who we are, or our DNA. We were a little bit disappointed about that because we know our guys. They compete at a high level all the time.

“It was a little disappointing that we didn’t compete for 40 minutes.”

Brewer, though, added that players have appeared re-focused this week. He said he was a bit behind schedule Wednesday on account of graduate assistant Trey Smith, who accompanied him at the luncheon, working out players in the practice facility.

More from WholeHogSports: 7 Keys to Arkansas vs. Liberty

Others were upstairs watching film, in the weight room and getting up extra shots.

“Guys are collectively buying in on how they can individually be better to make the team better,” Brewer said.

After back-to-back Elite Eight appearances, Arkansas’ mindset heading into its next journey is how it can take the next step. The two deep runs in the NCAA Tournament proved the Razorbacks, under Musselman, are not a product of the stage’s unpredictability or a flash in the pan.

Reaching the Final Four in Houston and bringing back to Fayetteville with them a national championship is the goal. Brewer said he vividly remembers the buzz of the mid-1990s when Arkansas won a national title then returned to the championship game in 1995.

The Razorbacks are not quite there as of now, but they have the respect of other programs nationally and a sizable target on their back. The team is in the top 10 of the preseason Associated Press Top 25 poll for the first time since 1994-95, and picked to finish second in the Southeastern Conference, according to media members who cover the league.

And Nick Smith, a McDonald’s All-American and projected top-five pick in next year's NBA Draft, is a consensus preseason All-SEC first-team selection. He, too, is a hot name for national freshman of the year honors.

Arkansas will not sneak up on anyone.

“We went into practice and we told our guys, ‘Yeah, guys, we’re top 10 and we’re projected No. 2 in the SEC, but we’re No. 10. I don’t think there’s nine teams better than us,’” Brewer said. “If we think that way, we have to perform and practice (like it) and carry ourselves like that. If we’re No. 2 in the SEC, we’ve got to carry ourselves like we’re better than Kentucky and we’re supposed to beat them. We shouldn’t be surprised when we have success. That’s our mentality. We have to change the mindset.

More from WholeHogSports: Raheim Sanders sprinting toward a special season

“I know a lot of people think, ‘Oh, Arkansas fans are outrageous. They think it’s national championship or bust in football and basketball every year.’ Well, that’s our mindset. We’re on the same wavelength.

“We feel like our guys, if we’re all on the same page and doing exactly what Coach Muss (wants), we’re going to have an opportunity to be in a lot of games and have a lot of success this year.”

Brewer, too, recalled Musselman’s line of thinking following the Elite Eight loss to Duke in San Francisco. In his postgame press conference, he stated roster building for 2022-23 would begin right away.

Brewer said Arkansas’ staff was on the phone with high-level transfers the next day. The Blue Devils, he added, showed coaches that the Razorbacks needed to become taller, faster, stronger and floor more length.

He believes they signed pieces — six freshmen, five transfers — that met those needs.

“We have really high expectations,” Brewer said. “Now we’ve got to buy in to the principles that Coach Muss teaches. That’s being tough, being tougher than everybody, defending at a high level, not getting out-rebounded, low turnovers. And you hope you’ll be able to make shots.

“If we can do that, I think we can get over the hump and get past the Elite Eight.”