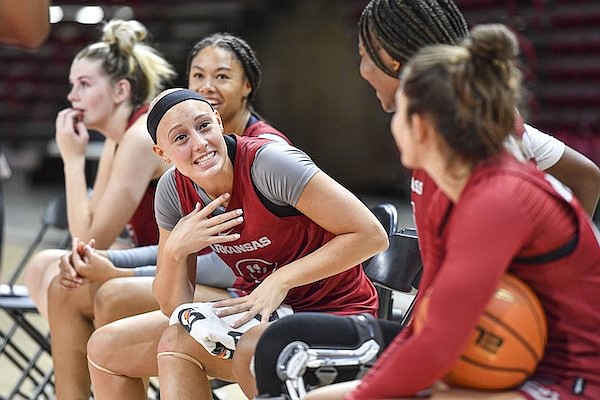 Arkansas guard Rylee Langerman is shown during a practice Thursday, Sept. 29, 2022, in Fayetteville.

“She’s what we affectionately call a fungus kid,” the University of Arkansas women’s basketball coach joked. “She just grows on ya. That’s what happened in recruiting, too. We’d go watch’em play and we’d see that kid that had more points or rebounds (than Langerman). But Rylee would stand out.

“That’s the kid that made her team better.”

Langerman knows her role and how to fill it to the utmost, Neighbors said.

“As coaches sometimes, we’ll throw kids in and it’s for the long haul and not the best thing to do,” Neighbors said. “We were very cautious because I think we knew what we had with her. We had really high expectations for her last year and I’ve said this several times … if there was an award for who filled their role the best, she’s probably the winner.

“In college, you don’t need five people on the floor all the time who want to shoot it, you really don’t. You need someone who knows where it goes. The value of that gets lost in highlights. That’s the danger of the society we’re in when we’re watching 2- and 3-minute clips. Because very rarely do you see the hockey assist or the defensive stop or the tipped ball. Maybe when she jumps over the bleachers and falls in the stands, they’ll show that but there’s just so much more to it.

“But she had her more tangible moments, too. The 5-9 guard from Norman, Okla., hit 5-of-6 three-pointers and scored a career-high 17 against Missouri to go with five rebounds, a blocked shot and a steal. She also grabbed a career-best 11 rebounds against Texas A&M. It was also her tie-up against Auburn that led to Amber Ramirez’s game-winning three-pointer.”

What she does for her group has already shown up in practice, Neighbors said. And those are times only her teammates and coaches see.

“The lineup efficiency doesn’t get reported in a boxscore,” Neighbors said. “You wouldn’t pick her for your fantasy team but everybody picks her for their competitive team. It’s already starting to show out here. She gets two really tough offensive rebounds and kicks them out and Saylor (Poffenbarger) hits a long three She throws it to Sam (Spencer) there’s a long bad close out, Sam racks it and gets and and-one. People that know the game know the value.”

Langerman said it helps that her coaches have always rewarded doing those small things, which in turn she’s also worked to improve in all those areas.

“I think that comes with me being secure out on the court with who I am because I know that I am better at rebounding or better at defense,” Langerman said. “Better at those things, so I find pride in the little things like that. And I think especially in practice my coaches rewarding me for doing stuff like that, reminding me that’s just as important as shooting the ball or scoring.”

Neighbors also pointed out she works as hard off the court as a 4.0 student with a pre-med major.

“She does a lot of really hard things,” Neighbors said. “She’s never had a conversation with me that doesn’t entail ‘What more can I do to help our team?’”

Langerman said her confidence grew as she got more time on the floor a year ago.

That experience should pay dividends this season as her role looks to expand.

“I think from game to game last season the more experience I got, the more confidence I had,” she said. “Just being out on the court whether that be taking that open shot and like being ready to knock it down. I just think my confidence grew every game.

“And I’m excited to carry that into this year.”

She said the confidence in her shown by teammates and coaches only served to buoy her own convictions.

“Knowing they have confidence in me just helps me play better honestly,” Langerman said. “Being able to make good decisions as the season went on, that improved for me. As my experience grew the more I was on the court, the more I got comfortable. So I was able to make better decisions.

“Toward the end of the year I was able to make more shots because I was more willing to take them and I was ready and more prepared.”

That saw her playing time soar as she was one of only two Razorbacks to play in all 32 games a year ago, averaging more than 19 minutes per game. That’s quite a change from her freshman year when Langerman played in only 13 games of 28 games and averaged just a shade over seven minutes per game.

Neighbors has said over and over that Langerman understands her role and focuses on making the most of it. She definitely embraces it.

“I’m a hustle player and I know that,” Langerman said. “That’s what I pride myself in so they knew I would bring that every game. So I knew that’s what they expected out of me. So I made that kind of who I was and I was proud to be that player for us.”

Even though the numbers don’t tell her true worth according to Neighbors, she experienced a bump in stats last season for sure.

She averaged 3.2 points, 3.7 rebounds and a shade under an assist per game. That’s different from 1.2 points and 1.1 rebounds as a freshman.

Neighbors said her performance was no surprise to the people who saw her every day in practice. She was close to breaking into more playing time as a freshman, he added.

“We’ve seen Rylee in practice. As a freshman, she was on the cusp of breaking into the lineup,” Neighbors said. “She did so many good things in practice. But we had a lot of good players. She was there when we needed her.”

She’s also battled with a condition called Alopecia, an autoimmune disease where the person loses their hair. But Langerman has chosen to look at it as a blessing rather than a burden.

“I think just throughout my life, basketball … it has been a huge outlet for me with it,” Langerman said. “I wouldn’t say it’s affected me as a player but as a person. Having a physical difference from other people definitely challenges your self-confidence and I think that is something I had to learn at a young age. So I think just learning that lesson and carrying it over to sports and to basketball has just shaped the way I play.”

She’s tried to put herself out there as an advocate for young people who also have Alopecia.

“What they would say is it’s so nice to see someone who looks like me,” Langerman said. “And so I just think being able to be put in a light where this is normal and just kind of normalize it is a big help for me because there’s a lot of little girls who are insecure about it and I want them to understand that physical differences don’t have to make you feel any less.

“Just because I’ve been where they’ve been … it seems like it’s a huge challenge but you can definitely overcome it. I want to show them that.”