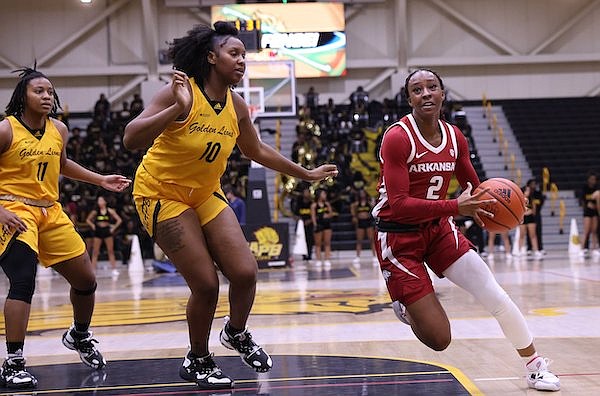 Arkansas guard Samara Spencer (2) dribbles the ball during a game against UAPB at the H.O. Clemmons Arena in Pine Bluff on Monday, Nov. 7, 2022.

A big second quarter was the difference for the Arkansas’ women’s basketball team Monday night.

The Razorbacks outscored Arkansas-Pine Bluff 28-7 in the second quarter and won 70-50 at Clemmons Arena in the season opener for both teams.

Arkansas made 10 of 19 shots — including 5 of 5 three-point attempts — and limited UAPB to 2-of-10 shooting in the second quarter.

Arkansas never trailed and led by as many as 34 points in the third quarter. The Razorbacks finished 23 of 58 from the floor, but struggled to pull away by more due to a 17-for-36 performance at the free-throw line.

Maori Davenport scored 14 points in her UAPB debut. Davenport, a junior center, is a former McDonald’s All-American who played last season at Georgia.

Arkansas is scheduled to play again Friday at 10:30 a.m. against Central Arkansas at Bud Walton Arena.