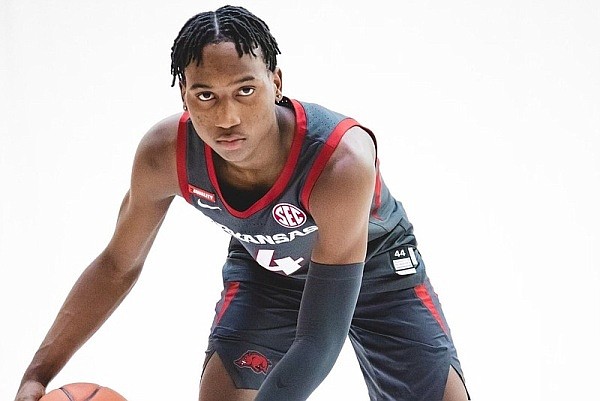 It does not appear the Arkansas men's basketball program will sign a prospect today, but expect Razorbacks point guard commitment Layden Blocker to sign on Saturday.

The early signing period, which begins today, runs until Nov. 16.

Blocker, who played at Little Rock Christian as a freshman and sophomore, is playing his junior and senior seasons at Sunrise Academy in Kansas.

Blocker, 6-2, 180 pounds, will sign his national letter of intent at Bordinos Restaurant in Fayetteville at 7 p.m. His signature would continue a trend for Arkansas coach Eric Musselman and his staff of signing some of the nation’s best talent since the 2020 class.

The Razorbacks' 2022 class included three ESPN 5-stars and three 4-star prospects. Nationally, the class was ranked only behind Duke’s.

Blocker is the highest rated 4-star in the ESPN rankings with an 89 grade, just one point shy of what is needed to become a 5-star recruit. He is rated the No. 6 point guard and No. 22 overall prospect in the nation in the 2023 class.

He saw his stock rise over the spring and summer while playing for St. Louis-based Bradley Beal Elite. Blocker is the lone commitment in Arkansas' 2023 class, but the Razorbacks are awaiting word on two other targets.

Fall, 6-11 and 217 pounds, is down to Arkansas, Auburn, Rutgers and Seton Hall, and Diop, 6-10 and 194 pounds, will decide between Arkansas, Colorado and Seton Hall. Both came to the United States from Senegal in 2019 to pursue academic and basketball opportunities.

Both players attend Denver Accelerated Schools and made unofficial visits to Arkansas for the Razorbacks’ 75-73 victory over Kentucky on Feb. 26, and officially visited Fayetteville for the Alabama football game weekend of Sept. 30-Oct. 2.

Fall, along with Blocker, were standouts at the prestigious NBPA Top 100 camp in late June and early July. Both made the 10-man all-star squad for the event.

Faye, Diop and Denver Accelerated Schools are scheduled to play in the Big Show Tip-Off Showcase at Fort Smith Northside on Nov. 19.