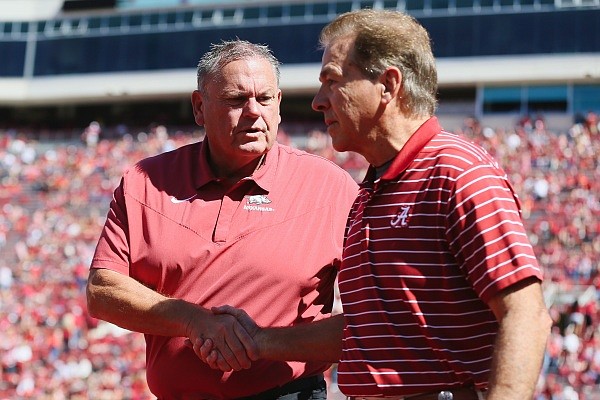 Is it harder to believe college football’s regular season is 75% in the books or that Alabama may not win the SEC West and probably won’t play for the SEC championship, which would mean no College Football Playoff for the Crimson Tide?

A few observations about this unpredictable season, starting with Alabama:

The Crimson Tide do not control their own destiny, and that hasn’t happened many times under Nick Saban’s leadership. But that doesn’t mean there’s a new sheriff in the Western Division of the SEC.

Yes, Brian Kelly and LSU are one win away from eliminating the Tide’s conference hopes, but Alabama’s losses were 52-49 at Tennessee and 32-31 in overtime in Death Valley at LSU.

Ole Miss could still win the West if LSU loses to either Arkansas or Texas A&M, but it would need to beat the Tide this Saturday, beat Arkansas in Fayetteville and win the Egg Bowl.

The biggest question in Oxford, Miss., is if Lane Kiffin will be back next season? He is apparently the leading candidate for the Auburn and Arizona State jobs.

If LSU beats Arkansas and the Aggies, the Tigers are headed to Atlanta and the SEC Championship Game.

After finishing second in the West last season, Arkansas is firmly in fifth place with three games to go. The Razorbacks’ battle for a bowl begins at 11 a.m. Saturday when LSU comes to town.

The biggest difference in this season and last is the Razorbacks have lost two winnable games. They are better than they showed against Texas A&M and Liberty, which is a good team but not a SEC team.

Mississippi State is bowl eligible, searching for an athletic director — hope the Bulldogs think to ask former Bulldog AD Scott Stricklin if he’s ready to leave Florida and come home — and a way to get a final SEC win against Georgia or Ole Miss.

A&M has underachieved on a grand scale, and if Jimbo Fisher’s buyout wasn’t around $85 million he would be on the hottest seat on the coaching carousel.

There are a lot of the Tigers Nation that would like for them to hire the unflappable Deion Sanders, commonly known as Coach Neon.

Even if they hired him, he’d be gone as soon as the Florida State job opens. For him, it isn’t about the money — he’s worth about $40 million — but making a difference somewhere he loves.

Georgia is exactly where everyone expected to be, undefeated and a favorite to make the CFP. The Bulldogs are averaging 514 yards of offense per game and giving up only 265.

Tennessee has had the biggest turnaround and Josh Heupel, who was invited to leave Oklahoma’s staff, is the mastermind. The Vols best defense is their offense.

The Vols only loss was to Georgia, and all they have left is South Carolina, Missouri and Vanderbilt, who are a combined 5-12 in SEC play.

Pencil Tennessee in as the No. 4 seed in the playoffs even if TCU goes undefeated.

South Carolina has had a better season than expected, but the win over Kentucky came with the Wildcats’ quarterback out.

Florida has been a disappointment, but should get bowl eligible. All the Gators have left is South Carolina at home an a touch-and-go at Vanderbilt.

Missouri is a work in progress and needs to win two of its final three games to go to a bowl.

Vanderbilt has had another Commodore-ish season, winless in the SEC.

So far, it has been a bit of an unusual season, but don’t count Saban out. The final bell hasn’t rung.