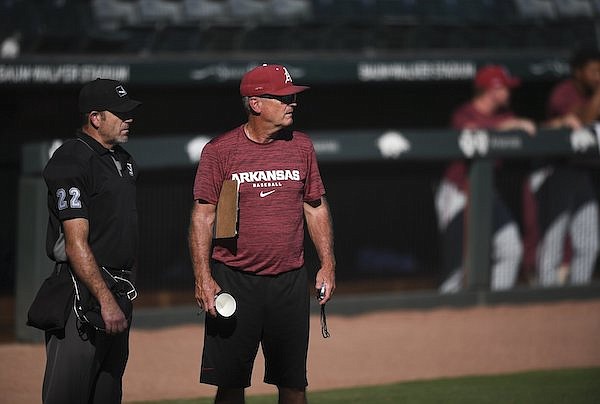 FAYETTEVILLE — Arkansas plans to sign the top-rated class in college baseball this week.

Dave Van Horn, the Razorbacks’ 21st-year head coach, complimented the work done on the recruiting trail by assistants Nate Thompson and Matt Hobbs, and said the staff is excited about the class.

“I think the good players want to play with good players,” Van Horn said Wednesday. “They want to feel like they're going to a program that has a chance to win and win big, and it’s kind of what happened there. We've had some good years. Guys saw where some guys were coming to play here, and they wanted to jump in and we got in the middle of it, got them on campus and with the facilities we have and all that we have to offer here — fan base, support — I think it added up to be the right choice for a lot of them.

“The future is bright. We know we're going to lose some of these guys, but you know, you can't get them if you don't (sign) them. You’ve got to try to get them and see what they do. And if they get here, it could be really special.”

Waid, from Texarkana, is the only in-state commit among the top 100. Other Arkansans expected to sign are third baseman Kade Smith of Harding Academy in Searcy, right-handed pitcher Kyler Spencer of Conway and outfielder Martavius Thomas of Camden Fairview.

The Razorbacks have a pair of top-100 commits from California (Helfrick and Gaeckle), Texas (Kent and George) and Missouri (Hachman and Zannetello).

Miller, the No. 4-ranked recruit by Perfect Game, is from Florida. The other top-100 recruits are from Wisconsin (Questad), Colorado (Martin), Hawaii (Souza) and North Carolina (Holland). Twelve states are represented in the expected signing class.

Van Horn said the $27 million Hunt Baseball Development Center played a big part in the Razorbacks’ recruiting success in this cycle. The Hunt Center opened in 2021.

“You bring them down here I show them the athletic side of it and the development side of it at the Hunt Center — it’s second to none,” Van Horn said. “Playing for highly motivated coaches and playing with highly motivated teammates, I think that a lot of them realize this is a good fit for them. Not everybody fits this program. We want guys that are really serious and want to get better and want to develop, because we work extremely hard. We don’t hide that and we talk about it, and it scares some guys off.

“But the ones that get here, I would say just about every one of them, they’re glad they’re here. Obviously they have to work hard and stuff to get in the lineup as a young player, but it’s that way at about 20 schools in the country, and we’re one of them.”

Arkansas topped the Baseball America rankings for the first time. The publication states “the class is…constructed in such a way that it should be able to withstand losses in the draft.”

The Razorbacks also topped the Perfect Game rankings for the first time since those rankings began in 2011. Arkansas’ previous high ranking was No. 2 in 2014.

Arkansas Baseball Commits for 2023 (According to Perfect Game)