SEC Report: Drinkwitz gets show of faith despite losing record 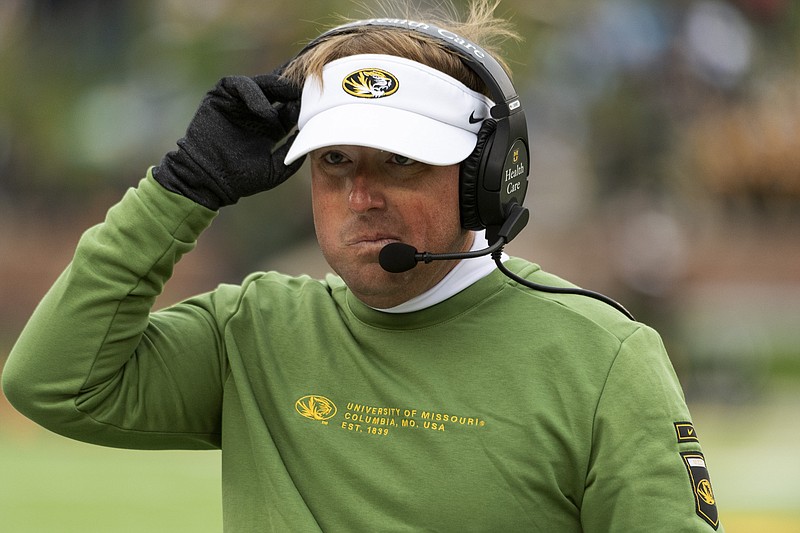 Missouri’s administration is banking on Coach Eli Drinkwitz, who has a 15-17 record in his third season, being able to build a winning program in the SEC.

Drinkwitz, who grew up in Alma and attended Arkansas Tech, has received a two-year contract extension through the 2027 season.

The new deal includes a series of raises which starting next season will increase Drinkwitz’s salary from $4 to $6 million.

Drinkwitz, 39, thanked Missouri President Mun Choi, Athletic Director Desiree Reed-Francois and the Board of Curators for believing in the direction of the program when he was asked about the extension and raise Wednesday on the SEC teleconference.

The salary pool for Missouri’s assistants also will be increased from $5.2 million to $6.3 million, the St. Louis Post-Dispatch reported, including a new three-year deal for defensive coordinator Blake Baker that will average $1.2 million. There will be a bigger budget for support staff, from $1.2 million to $3.5 million.

“They’re making sure we have everything in place to be successful,” Drinkwitz, a high school assistant at Alma and Springdale as well as at Arkansas State University, said of the Missouri administrators. “The SEC coaching market kind of got reset this year, so this is a sign of continual commitment … and the pressure and expectation to match the resources that are given.

“I look forward to the challenge of continuing to upgrade Mizzou football in this tough conference.”

Drinkwitz’s extension and raise were announced last week after Missouri (4-5, 2-4 SEC) beat then-No. 25 South Carolina 23-10 on the road. The Tigers’ four SEC losses, including 21-17 to Kentucky last Saturday, have been by a combined 18 points.

“The results will come,” Drinkwitz said after the Kentucky game. “I look forward to being the head football coach here for a long time.”

Missouri plays Saturday at Tennessee, where second-year Coach Josh Heupel no doubt is in line for a big raise and extension.

Heupel, who has led the Vols to an 8-1 record with victories over Alabama and LSU and the No. 5 ranking in the College Football Playoff poll, is making $5 million.

Texas A&M has its longest losing streak in 42 seasons.

Florida beat the Aggies 41-24 last week to hand them a fifth consecutive loss.

“They’re staying together, they’re working hard, they believe in the things we’re doing, they believe in each other,” Aggies Coach Jimbo Fisher said Monday of his players’ mindset. “And you see that by how hard they play and the way they play.

“There’s a lot of fight and understanding about how they go about their business.”

If the Aggies lose at Auburn on Saturday, it will be their first six-game losing streak in 50 years.

Defending national champion Georgia is ranked No. 1 in the College Football Playoff poll after beating previous No. 1 Tennessee 27-13.

The Bulldogs moved up from their No. 3 spot in the initial College Football Playoff poll.

“I feel like we’ve had a target on our back all year,” Georgia Coach Kirby Smart said Tuesday night according to DawgNation. “I really don’t feel like that changes, right?

“When you won the national championship the year before, there’s a target on your back from day one. It doesn’t change regardless of your record or the venue that you play in. We talk about toughness and DNA, and DNA travels. If you have good DNA, it travels with you.”

Liberty Coach Hugh Freeze already was viewed as a leading candidate for the Auburn job before his Flames played at Arkansas.

“I don’t know that Auburn wants me. I have no clue,” Freeze told Brandon Marcello of 247Sports after the game. “I know this: I have won everywhere I’ve been and my staff and kids have turned programs fast.

“It’s our culture that we instill. I know we do that and the proof is in the pudding.”

In Freeze’s only season at Arkansas State University in 2011, the Red Wolves were 10-2.

Freeze then returned to Ole Miss, where he had been assistant, and led the Rebels to a 39-25 record — highlighted by Peach Bowl and Sugar Bowl appearances — before being fired for NCAA violations.

That was six years ago.

Now Freeze has a 34-12 record at Liberty with the team headed to a fourth consecutive bowl game.

Super agent Jimmy Sexton continues to represent Freeze and he might wield as much influence in the SEC as Commissioner Greg Sankey considering most of the conference’s coaches are his clients, including Alabama’s Nick Saban, Georgia’s Kirby Smart, Ole Miss’ Lane Kiffin and Arkansas’ Sam Pittman.

“All that is speculation to me, because truthfully, I am as happy as I can be here,” Freeze told 247Sports of being a candidate for the Auburn job. “I’ve told my administration and I’ve told my players as straight as I can be: if something interests me, I’ll tell them.”

Liberty recently announced a raise for Freeze to $5 million annually and a contract extension through the 2030 season.

“To this point, nothing has [interested him] that has called — and I’m not saying the ones who called wanted me,” Freeze told 247Sports. “They just call Jimmy and I say that really doesn’t fit me, [Freeze’s wife] Jill and the kids. But if one does, you have to sit down and have a conversation. That hasn’t happened yet.”

Of special interest to new Auburn Athletic Director John Cohen and the Tigers’ boosters and fans regarding Freeze should be that at Ole Miss he twice beat Alabama and Nick Saban.

Kiffin will give it another shot on Saturday when the Rebels play the Crimson Tide at Bryant-Denny Stadium.

Then Smart’s Bulldogs beat the Tide 33-18 in the College Football Playoff title game after losing to Alabama in the SEC Championship Game.

Kiffin, Saban’s former offensive coordinator at Alabama now in his third season at Ole Miss, lost to the Tide 65-48 and 42-21 the last two years.

Kiffin was Tennessee’s coach in 2009 when Alabama and Saban beat the Vols 12-10, but at that time he hadn’t yet been an assistant coach for Saban.

Saban hired Kiffin after he was fired at Southern California midway through the 2013 season.

“I think it’s good,” Kiffin said on Wednesday’s SEC coaches’ teleconference. “We see each other at the meetings and talk and actually laugh while sitting down at breakfast with Kirby [Smart] and [Florida Coach] Billy Napier. It’s kind of like an old staff meeting.”

Napier is also among Saban’s former assistants the Alabama coach has beaten, when Napier was at Louisiana-Lafayette.

“It was an awesome experience there to really learn from him, and … as you get further away, you have more appreciation for everything he did for me and everything I learned from him,” Kiffin said. “Him taking a chance on me, and really saving my career.”

Saban’s reign of terror over his former assistant began in 2010 when he beat Tennessee and Derek Dooley, who he was 3-0 against. It continued against Texas and Coach Steve Sarkisian and Texas A&M and Fisher this season with Alabama beating the Longhorns 20-19 and the Aggies 24-20.

During the second half of Mississippi State’s 39-33 overtime victory against Auburn last week, Bulldogs Coach Mike Leach was seen folding up chairs on the sideline meant for the receivers to sit in when the offense wasn’t on the field.

“We were in that period of time where it sure seemed to me we were a lot more interested in sitting in that chair than being on the football field or rooting for our teammates,” Leach said. “So it was my opinion that we ought to be rooting for our teammates rather than kind of lounge around, because we pretty much had everything but playing cards over there. I thought it was time to move on from that.”

Vanderbilt’s losing streak against SEC teams was extended to 25 games — the third-longest in conference history — when South Carolina beat the Commodores 38-27 last week.

It’s the second-longest SEC losing streak ever for Vanderbilt and the Commodores’ fourth of 21 or more games.

Vanderbilt’s streak isn’t likely to end on Saturday considering the Commodores play at No. 24 Kentucky. Then they finish at home against Florida and No. 5 Tennessee.

The good news for Vanderbilt is that it still isn’t close to the SEC record for consecutive losses held by Sewanee (37 games from 1933-40).

Judkins, who has rushed an SEC-high 180 times for 1,036 yards and 13 touchdowns, will be back in his home state when the Rebels play at Alabama.

Judkins, from Pike Road, Ala., chose Ole Miss over Auburn, Clemson and Notre Dame, but he wasn’t offered a scholarship by Alabama. He’s the first Ole Miss player to reach 1,000 rushing yards in nine games since Kayo Dottley in 1949.

In a 31-28 victory at Texas A&M, Judkins rushed 34 times for 205 yards, the most carries by an Ole Miss player since Deuce McAllister had 36 against Mississippi State in 1999.

Alabama, which lost 32-31 in overtime at LSU last week, will look to keep that bounce-back trend going.

The Tide lost four consecutive games in 2007 to end the regular season before beating Colorado in the Independence Bowl.

466.5 — Yards in total offense Alabama has averaged against Ole Miss since Nick Saban became the Crimson Tide’s coach in 2007.

$500,000 — Fines LSU has paid the SEC for fans storming the field after victories over Ole Miss and Alabama.

“There’s things that we need to do better in every part of our organization. I’m not going to analyze anybody publicly, good, bad or indifferent. We’re all working hard together, we’re all responsible for what we do. Do we need to play better on both sides of the ball? Absolutely.”

“It’s a learning process. That’s something I communicated to the offense before the game was even over — that we’ll learn from this and we’ll bounce back.”

— Tennessee QB Hendon Hooker on the Vols’ 27-13 loss at Georgia.

“There will not be anything we don’t look at. Everything is on the table every day. I’m not going into dates and times and the process and when the finish line is going to be. We’ll get there when we get there and we’re going to make the right decision for this great institution.”

“How many times is he going to have to prove you wrong??? Stop please!!!”

— Ole Miss Coach Lane Kiffin on Twitter in response to those saying Alabama’s dynasty under Nick Saban is over.