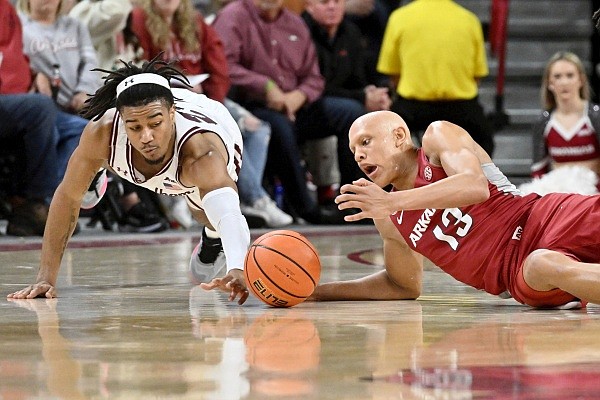 FAYETTEVILLE — During its 74-48 victory over Fordham last Friday, Arkansas put on display just how much it has grown since the 30-point exhibition loss at Texas on Oct. 29.

The Razorbacks, ranked No. 9 in The Associated Press Top 25 poll released Monday, were solid defensively during their 76-58 season-opening victory over North Dakota State on Nov. 7. They took their intensity to another level against the Rams.

KenPom data shows Arkansas recorded a defensive efficiency rating of 66.4 — fifth best under fourth-year coach Eric Musselman — and forced Fordham into a turnover on 41.5% of its possessions.

But more impressive — and pleasing to Musselman — was Arkansas’ collective connectivity and its extra-effort plays. The Razorbacks routinely were first on the floor for loose balls, they covered for one another in defensive rotations, took charges and made scoring the basketball even once a chore for the Rams.

Not only were Arkansas players the first to hit the floor for 50-50 balls, several times they showed the wherewithal to locate a teammate while doing so and pushed the ball in their direction to kickstart a transition opportunity. Inklings of a group with good synergy were evident throughout.

“I think there’s some really good chemistry,” Musselman said. “It’s interesting, whether I talk to Mike Lombardi, a former NFL executive, or I talk to Phil Nevin, who’s obviously a manager for the (MLB's Los Angeles) Angels — some of these guys are not basketball experts … The big thing I like (is I will ask), ‘Hey, do you see a theme or identity that our guys are playing with?’

“And I think the last two years when I’ve asked people that are not necessarily only watching Arkansas or maybe they’re not in the building and they’re watching via TV, I think toughness, getting to loose balls, defending for 40 minutes, those are some of the themes that we’ve heard the last two years.

“And maybe a little bit earlier than prior years we’re starting to hear those descriptions of our team, which is a good sign.”

Arkansas is allowing 53 points per game. Opponents have made 42.9% of their interior looks and 23.7% of their three-point attempts.

Making life difficult for an opponent for one game is one thing. Replicating the energy and passion exhibited last Friday is another, especially against stiffer competition.

The goal for Wednesday’s home game against South Dakota State: Keep the foot on the gas.

“And it doesn't happen 30 nights. Last year, we didn't play with that effort in North Little Rock (an 89-81 loss to Hofstra), and we saw the results. If you don't play with incredible effort, you're gonna get the results we got last year when Hofstra beat us.

“We've got to have great effort as many nights as we possibly can over over a 30-game regular season sample size.”

Wichita State transfer Ricky Council said last Friday that Arkansas for the first time – European tour and exhibitions included – played as one defensively for a full game. He considered it a big step in the right direction.

Jordan Walsh, who scored 12 points against the Rams on 5-of-7 shooting, was proud of the team’s intensity, and he is looking for similar showings in the games to come. For the Razorbacks, Wednesday’s game represents their last before playing three games in three days at the Maui Invitational on Nov. 21-23.

Entering the sport's highest-profile early-season event on a high note would breed more confidence for the roster and perhaps put Louisville and other potential opponents in Hawaii on notice.

The Jackrabbits opened their season Nov. 7 with an 81-80 overtime loss at Akron, then bounced back with a 68-66 win at Boise State last Wednesday. They will play St. Bonaventure on Tuesday in Sioux Falls, S.D., prior to traveling to Fayetteville for a 7 p.m. tip on SEC Network-Plus.

“It’s my first year in college, so it’s like a new experience for me,” Walsh said last Friday, “but I feel like with the history Coach Muss has, he’s always been in the top 15 when it comes to some defensive category, whether it’s defending the three-ball or not allowing paint touches or whatever that is.

“Now it’s carrying over into this year. We’re just listening to him and it’s going to lead the way, for sure.”