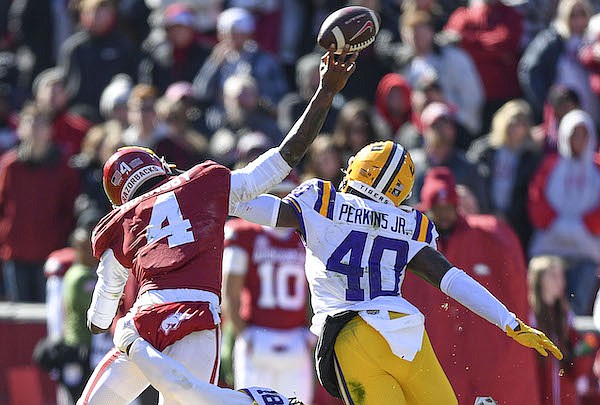 They could not have imagined how the freshman, who had been dealing with the flu, would blow up their plans in at 13-10 loss to the Tigers.

Perkins wound up with a school-record tying four sacks and two forced fumbles, and he also excelled at spying on quarterbacks Malik Hornsby and Cade Fortin.

“They were bringing nickel fire with him off the edge, so he was coming off the edge a lot, which I think that’s a good spot for him to blitz from,” Stromberg said. “He’s a fast kid. He had a wonderful game, he had a great game.”

Added Sanders, “I would definitely say he’s a great player.”

The 6-2, 220-pounder from Cypress, Texas, did not let Hornsby get to the edge on several runs, and he even punched the ball away from the speedy quarterback early in the second quarter, leading to a 17-yard sack, an LSU recovery and the Tigers’ first points of the game.

“His head was on fire,” LSU defensive end BJ Ojulari said. “Just persistent pursuit of just trying to get to the quarterback. “The whole game I was telling him on the sideline, ‘That’s five [pressures], that’s six,’ just keeping his head up, keeping him going … and when we needed a big play he made it.”

LSU Coach Brian Kelly brought up Perkins’ battling with the flu, saying he mentioned to the freshman that Michael Jordan had one of the best performances of his career while dealing with it.

Coach Sam Pittman had a message for the offense as it took the field at its own 24-yard line with 1:35 remaining, trailing 13-10 with no timeouts remaining.

“That’s what I told them whenever we were going out there,” Pittman said. “I said ‘If somebody would’ve told us that this was the scenario, we’d take it. Let’s go. Let’s go win the game.’

Teams that are struggling offensively sometimes turn to aggressive play calling to try to break their funk.

Arkansas Coach Sam Pittman did that on a couple of occasions on Saturday with fourth down gambles and both times it cost the Hogs.

The Razorbacks went for it on fourth and goal from the LSU 3-yard line late in the first quarter after reaching the Tigers’ 1 following Latavious Brini’s fumble recovery at the LSU 10. Malik Hornsby took a Shogtun snap and ran up the middle, where he was stopped by defensive tackle Mekhi Wingo for no gain.

In the third quarter, trailing 6-3 and facing a fourth and 2 from the LSU 48, the Razorbacks were rolling right when Hornsby lost his footing and fell on his behind for a 12-yard loss. LSU took possession and drove for its only touchdown of the day.

“We thought we had a play that was going to work,” Pittman said. “We’d worked on it. Really a short yardage play and I thought it would work. The other things is I thought we needed a little spark and I felt like we could make it. I mean, nobody goes for it if you don’t.

“That one wasn’t as hard to me as it was at the end of the game on fourth and 11 and you’ve got four minutes left and what are you gonna do?

“You know, on fourth down you have to make a decision every single time. And sometimes it works and sometimes it doesn’t. But the two fourth downs didn’t work. I really don’t know what to say about it other than I thought it was. We had plays that we wanted.”

Latavious Brini became the second Arkansas player to record an interception and a fumble recovery in the same game this season.

Brini picked off Jayden Daniels to end LSU’s first series at the Arkansas 40 and he recovered a fumble forced by Jordan Domineck at the LSU 10 later in the first quarter.

Hudson Clark had an interception and a fumble recovery in the Hogs’ 52-35 win at Brigham Young on Oct. 15.

Brini became the 16th Arkansas player to accomplish that feat since 1998.

LSU quarterback Jayden Daniels threw just his second interception of the season and lost a fumble in an erratic offensive effort from the Tigers one week after upsetting No. 6 Alabama.

“You know, things happen, you gotta live and learn from it,” Daniels said of the turnovers. “ The first one, it slipped, I tried to pull it back down and it slipped in my hand, landed with the other dude.”

Daniels’ first down pass from the Arkansas 38 went straight into the hands of Arkansas safety Latavious Brini just across the line of scrimmage. Daniels made a quick tackle after the interception that might have saved a touchdown.

The other turnover came on a zone read play after a mesh with the running back. Jordan Domineck swatted the ball out of Daniels’ hands for Brini to recover at the Tigers’ 10.

“Just miscommunication we gotta clean up, especially being on the road,” Daniels said. “You turn the ball over on the road, good things will never happen, and we just shot ourselves in the foot too many times.”

The Razorbacks got after LSU’s offensive line and quarterback Jayden Daniels by racking up seven sacks, their second highest in a game this season behind the eight they had in a 38-27 win over Missouri State.

“We knew their quarterback was a great player,” said Arkansas linebacker Drew Sanders, who had two combo sacks. “Watching him on film, he just kind of seemed like the key to their success. We knew getting after the quarterback would help everybody else on defense. We just did a great job attacking.”

The Razorbacks bumped their total up to 35 on the year, tops in the SEC and third highest in the nation behind Pittsburgh’s 37 and Louisville’s 36.

Sanders leads the team with 8.5 sacks and seven other Razorbacks have at least two. Jordan Domineck has 6.5 sacks, followed by Chris Paul with 4, Zach Williams with 3.5, Landon Jackson with 3, and Bumper Pool, Eric Gregory and Myles Slusher with 2 each.

Arkansas will host Ole Miss on Saturday at 6:30 p.m. on SEC Network, the conference and its broadcast partners announced late Saturday. The kick time and network had been in the six-day exception window, though Arkansas knew the kickofff would be at 6 or 6:30.

That will give the Razorbacks their third night game of the year, following back-to-back games against Missouri State and Texas A&M in Weeks 3-4.

Arkansas will finish with a 2:30 p.m. game against Missouri on the day after Thanksgiving, the Hogs’ fifth day game, following afternoon kicks against Cincinnati, Alabama, BYU and Liberty. The Razorbacks had 11 a.m. games against South Carolina, Mississippi State, Auburn and LSU.

The kickoff temperature was 33 degrees for the Razorbacks’ game against LSU, but the mercury could be even lower for Saturday’s 6:30 p.m. game against Ole Miss.

The six-day forecast projects temperatures dropping from a day-time high of 43 degrees toward an overnight low of 23 degrees on Saturday.