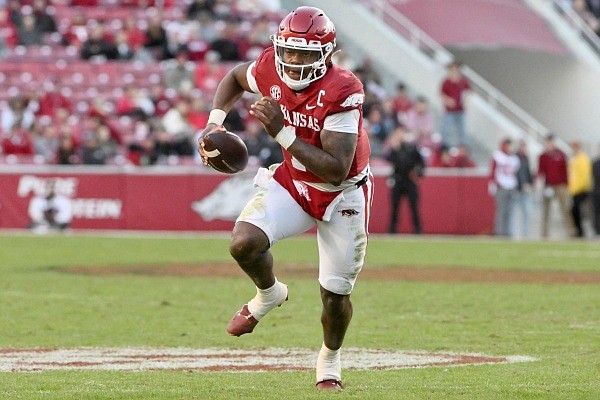 FAYETTEVILLE — Quarterback KJ Jefferson participated at the front of the line in footwork and passing drills Tuesday, perhaps indicating the University of Arkansas junior is preparing to return to the starting lineup for Saturday’s 6:30 p.m. game against No. 14 Ole Miss.

Reporters were able to view the first 15 or so minutes of practice Tuesday as the Razorbacks worked on their outdoor practice fields in temperatures hovering in the mid-30s.

Jefferson missed last week’s 13-10 loss against No. 7 LSU as he continued to recover from a right shoulder injury. The 6-3, 242-pounder is 14-7 as the starter the past two seasons, and the Razorbacks are 0-2 in games he does not start.

Coach Sam Pittman said he expected to have Jefferson back in action this week and senior offensive tackle Luke Jones gave him a thumbs up from Tuesday’s work.

“I think he did good,” Jones said. “He’s looking good. He’s looking healthy. We’re excited to have him back this week.”

Arkansas could get several starters back this week. Right tackle Dalton Wagner sat out with a back issue against the Tigers, and nickel back Myles Slusher could be back in action after a suspension following his arrest on disorderly conduct allegations. Pittman said he would remark on Slusher’s availability today.

In other personnel news, senior receiver Warren Thompson missed a second consecutive day of practice Tuesday not related to injury.

For Ole Miss, tailback Zach Evans, who went out with a concussion in last Saturday’s loss to Alabama, and tight end Michael Trigg are both questionable.

Arkansas Coach Sam Pittman said he’d like a “freeze out” kind of game Saturday to make things uncomfortable for Ole Miss, which is practicing in slightly warmer weather this week. Several of the Razorbacks said they would like the same.

“They’re coming into our place, it’ll be cold as all get out, and they won’t have anybody cheering for them,” defensive end Zach Williams said. “So I feel like it’s going to be one up on us. I’m ready for it.”

“I’d love it to get as cold as it possibly can,” Wagner said. “I love the cold and I think it brings an advantage, definitely, to the home team that’s been practicing in it all week, that the colder it gets the better off we can get.”

Said offensive tackle Luke Jones, “I love the cold. As an offensive lineman, as a bigger guy, you love it wen it’s not boiling hot outside.”

Ole Miss Coach Lane Kiffin spoke about the potential sub-30 degree weather that the teams will face as the evening turns into night Saturday. He said the cold during last week’s home game against Alabama was challenging for him.

“I think our players are good,” Kiffin said. “I’m the issue. I’ve tried everything. I was freezing during that game.”

Senior offensive tackle Dalton Wagner said he’s bounced back well from the back issue that kept him out of last week’s game against LSU.

“I feel really good,” Wagner said. “I couldn’t go last week. I didn’t think I gave my team the best shot to win.

Ole Miss Coach Lane Kiffin paid a compliment to his counterpart Sam Pittman when asked if he thought the Rebels could see up to three quarterbacks from Arkansas on Saturday after KJ Jefferson sat out last week’s 13-10 loss to LSU, and Malik Hornsby and Cade Fortin played in his stead.

“I don’t know,” Kiffin said. “It sounds like KJ will be back just from what they’ve said, and I feel like Sam kind of doesn’t play a lot of games in the media, just kind of says what it is with injuries and stuff. I think he’s been pretty open that they expect him back.”

Arkansas running backs coach Jimmy Smith was announced Tuesday as the Razorbacks’ nominee for the Broyles Award, which is given annually to college football’s top assistant coach.

Smith, who oversees 1,100-yard rusher Raheim Sanders and others as part of the nation’s 12th-ranked rushing attack, is one of 51 nominees for the award created by former Razorback David Bazzel.

A native of Darlington, S.C., Smith joined Coach Sam Pittman’s first staff in early 2020. He is rated one of the best recruiters on the staff, having played a key role is landing backs AJ Green, Rashod Dubinion and James Jointer and having a hand in signing Dominique Johnson.

He also was key in landing transfer receiver Jadon Haselwood, who played for Smith at Cedar Grove High School in Georgia.

Jadon Haselwood continued his streak Saturday of having at least three receptions in every game with a team-high 5 catches on 7 targets for 39 yards against LSU.

Arkansas completed just 12 passes against LSU, its second-lowest total of the season behind the 10 in a 40-17 loss at Mississippi State. Those two games were started by backup quarterbacks Malik Hornsby and Cade Fortin, respectively.

Haselwood, who has been playing through a sprained AC joint, leads the Razorbacks with 49 receptions and he’s second behind Matt Landers with 592 receiving yards.

Ole Miss Coach Lane Kiffin gave a crafty response Monday when asked about the lack of a penalty last Saturday after Alabama linebacker Dallas Turner gave Rebels quarterback Jaxson Dart an extra shove to his helmet into the grass while Dart was prone on his stomach.

Dart had thrown incomplete on the fourth-down play at the Alabama 41 with 6:27 remaining and Ole Miss trailing 27-24, so an unsportsmanlike conduct penalty would have set the Rebels up with a first down at the Tide 26.

“Obviously the Jaxson part and after-the-whistle stuff is disappointing,” Kiffin said. “I talked to his mom. I just kind of apologized, even though it’s out of our control.

“She mentioned that it’s just a shame that her son gets treated different based off what SEC program he’s at on game day and protected different. It is what it is and we move on.”

Kiffin made sure to interject as a reporter began asking another question, “Let’s make sure that quote was right. Like, she said it, not me. I really don’t want to get fined today.

“You can’t fine me for what someone else says.”