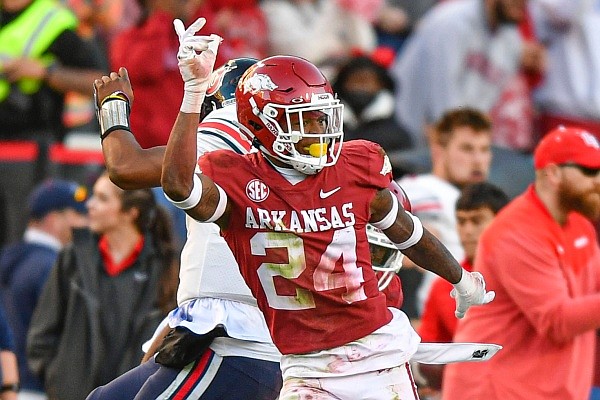 Arkansas defensive back Quincey McAdoo (24) celebrates his interception with teammates on Saturday, Nov. 5, 2022, during the fourth quarter of the Razorbacks’ 21-19 loss to the Liberty Flames at Donald W. Reynolds Razorback Stadium in Fayetteville.

FAYETTEVILLE — Despite all the recruiting research and tape watched, sometimes coaches need background reminders about the players they play.

Sometimes from the player.

Another tall, talented true freshman receiver right from the Razorbacks’ backyard, Clarendon’s Quincey McAdoo, reminded Pittman that he played both ways for the 2021 state champion Lions. As a Clarendon cornerback, McAdoo made 58 tackles with an interception and 88-yard touchdown fumble return complementing his everywhere big-time offensive threat as receiver, running back, passer and kick returner.

“They didn’t ask me,” McAdoo said after his interception plus blocking a punt for a safety during the 21-19 loss to Liberty. “I asked after I saw our DB room that everybody was getting hurt. I knew I had played defense in high school and I felt like I could contribute. So I asked Coach Pitt his thoughts on me playing defense for the remainder of the year, and we’re here.”

Here means McAdoo cornering his side of the cornerback market heading into Saturday night’s SEC game with Ole Miss at Reynolds Razorback Stadium.

“I notice they didn’t really catch too many balls over there on him,” Pittman said. “I did see him make several physical tackles. I think he’s a really good player.”

With McAdoo established, purely safety Clark made 7 tackles against Liberty, and made 9 tackles and broke up 2 passes against LSU.

“I think he’s just taken advantage of the role he’s been into,” Clark said of McAdoo. He’s really stepping up in that role. I felt like we (the entire defense) fed off each other, and it was really fun to be part of.”