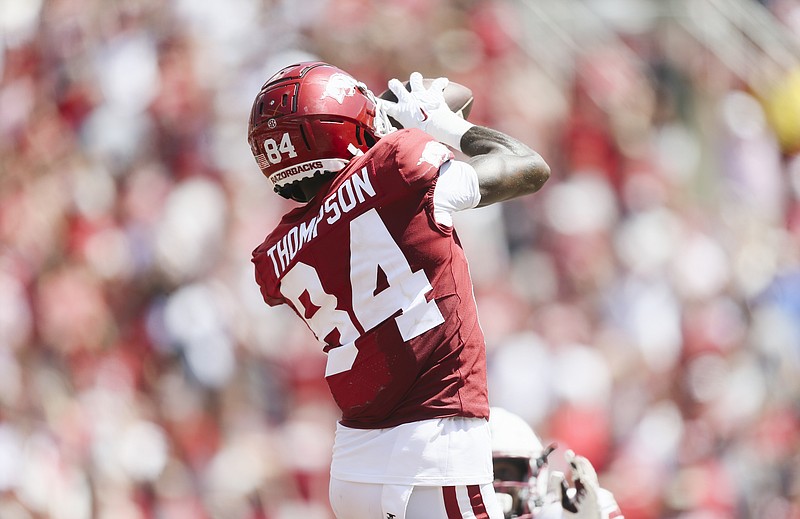 FAYETTEVILLE — Arkansas is gaining a defensive player for this weekend’s game against No. 14 Ole Miss, and has lost an offensive piece for the season.

Sam Pittman on Wednesday’s SEC coaches teleconference said defensive back Myles Slusher will be available against the Rebels following a one-game suspension. He was arrested Nov. 6 in connection to disorderly conduct.

“I have cut the suspension off of Slusher, so he has practiced this week also,” Pittman said.

Slusher, in five games this season, has 20 tackles, 4 tackles for loss and 2 sacks.

Thompson this season was No. 6 on the team in receiving yards with 178. He had 12 catches and a pair of touchdowns.

According to Pro Football Focus, Thompson averaged 29.5 snaps in his last six games played. He averaged 61.3 snaps in the Razorbacks' first three games of the season.

Pittman added that receiver Jaedon Wilson is the next receiver up to replace Thompson, a transfer from Florida State. Wilson has one catch for two yards in 2022.

"Obviously, Warren hadn’t started a whole lot of games with Matt (Landers) and all those things,” Pittman said. “Jaedon Wilson would be the next guy in that rotation.”

“He’s practiced most every play this week, so I feel good about him” Pittman said of Jefferson. “Dalton Wagner, also, has practiced a lot this week. We’re probably about as healthy as we’ve been in a long, long time.

“There’s some soreness in those two, but that’s going to happen in game No. 11 in our league. I feel good about all of those guys.”