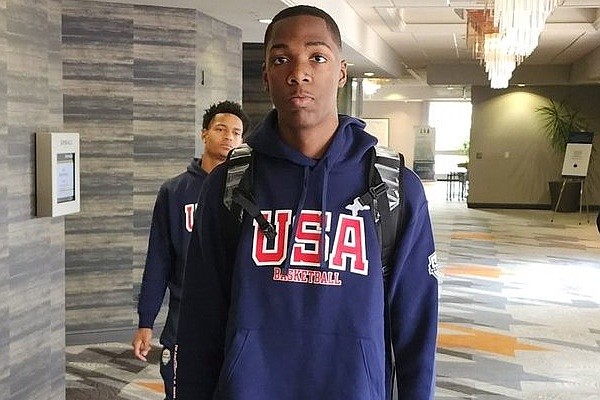 He talked to Musselman in the afternoon and learned of the offer.

“I’m just surprised to get it so early,” Funches said. “I can’t remember exactly what he said, but he was just congratulating me and he gave me the offer. They’re a great defensive team.

“It’s like they teach people the mentality and make dogs of them.”

He was a standout for former Arkansas and NBA great Joe Johnson’s Team Iso Joe on the AAU circuit. His father played at Connecticut and North Texas in the 1990s, and his mother was a standout at Jackson State.

Program director and 15-under Team Iso Joe coach Tony Moore bragged about Funches’ basketball IQ and game as a whole.

"I've been coaching travel basketball 22 years and I think Sam is one of the most naturally gifted big players I’ve ever coached,” Moore said. “He can stretch the floor at 6-10. He runs like a gazelle, is able to time and block shots, but what I think makes him very, very special and unique is he’s kind of a combination an old-school big that wants the ball in the post and wants to be able to dominate the paint, and today’s European kid that can also step out and shoot the three.”

Funches was invited to and participated in the Team USA National mini camp on Oct. 7-10 in Colorado Springs, Colo.

His father Sam has a healthy respect for the Arkansas program.

“When I first heard it, I was excited,” Sam Funches said of the Razorbacks' offer. “I just know the history of Arkansas back when they had Nolan Richardson and Mike Anderson. Those guys actually recruited me at Arkansas when I was playing ball, and just to see Sam go through the process that I went through and then some, especially at an early age, it’s amazing and a blessing at the same time.”

Funches, who received an offer from Georgetown before he started the eighth grade, also has a great attitude.

“He’s tremendously humble, God fearing and just a great teammate. He’s definitely been a joy to coach, and there’s not a kid on our team that didn’t enjoy being around him,” Moore said.