Razorbacks advance to Sweet 16 with win over Ohio State 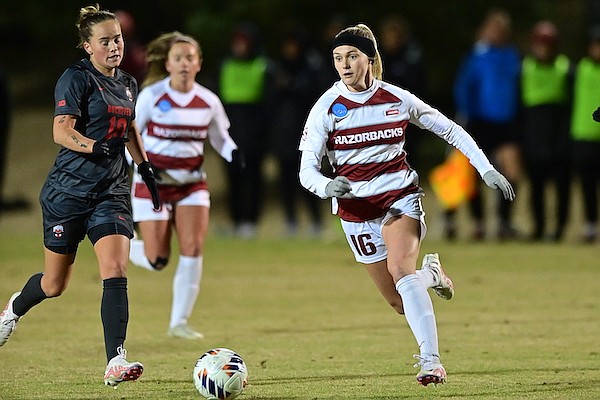 Arkansas' Anna Podojil (16) chases the ball during an NCAA Tournament game against Ohio State on Friday, Nov. 18, 2022, in Fayetteville.

FAYETTEVILLE — The Arkansas soccer team advanced to its second consecutive Sweet 16 with a 5-2 victory over Ohio State on Friday night at Razorback Field.

Arkansas will host Memphis on Sunday at 5 p.m. with a chance to advance to its second consecutive Elite Eight. The match will be streamed on ESPN-Plus.

The Razorbacks’ offense has come alive in the NCAA Tournament, scoring 11 goals through two games against Missouri State and Ohio State.

“We got a lot of questions about goals being scored,” Hale said. “We just had to keep doing what we’re doing and fix a few small things. We’ve done that and the goals are starting to roll.”

The Buckeyes struck first Friday when junior midfielder Peyton McNamara unleashed a laser past Arkansas goalkeeper Grace Barbara into the top right corner in the sixth minute to give Ohio State a 1-0 lead.

After five consecutive Arkansas goals, McNamara converted a brace with another long-range strike in the 85th minute.

Senior midfielder Bea Franklin tied the game in the 15th minute on a header off a free kick by Emilee Hauser. Her glancing header sailed into the top corner, leaving the Ohio State goalkeeper rooted on the goal line.

In the 25th minute, senior forward Anna Podojil got behind the defense and rolled the ball past the goalkeeper to put the Razorbacks ahead. It was her 45th career goal, making her Arkansas’ all-time leading scorer.

“It is just super awesome,” Podojil said of breaking the record previously held by Julie Williford since 2003. “Being able to do it at home is extra special. I’ve had great fans with me the whole four years I’ve been here. I’m just super grateful that I get another season.”

Franklin nodded home another goal just before halftime to give the Razorbacks a 3-1 lead. All six of her career goals have come on headers.

“She is a beast,” Hale said while describing Franklin’s aerial ability. “You cannot stop her. Some of it is athleticism and some of it is pure toughness and timing. She’s tremendous.”

Barbara made three saves – two of which came in a flurry during the 39th minute.

She parried a hard-hit strike from the top of the box. The rebound landed directly at the feet of another Buckeye forward who forced an instant kick-save off the line.

Jessica De Filippo and Ava Tankersley added the final scores for the Hogs in the second half. De Filippo has tallied four goals through two tournament rounds.

The Razorbacks extended their home-match undefeated streak to 22 games. They have not lost at home since 2020 against Saint Louis.

Arkansas improved to 8-0 all-time in home games during the postseason — all since 2016.

“It’s all thanks to our fans,” Franklin said. “It was freezing tonight and so many people showed up and showed out. A huge credit to our bench as well."

Hale echoed Franklin’s praise of the home crowd. He said Arkansas’ home-field advantage is second to none.

Memphis defeated Mississippi State 4-0 on Friday afternoon at Razorback Field, nullifying an all-SEC matchup in the Sweet 16 and a chance for Arkansas to avenge one of its regular-season losses.

It was the second win for the 15th-seeded Tigers this postseason over a higher-seeded team. Memphis (11-5-5) upset Saint Louis, a No. 2 seed, 1-0 in the first round, which allowed Arkansas to host this weekend.

“It is going to be a massive test,” Hale said. “We’re going to have to recover and get ready for a really, really good Memphis team.”