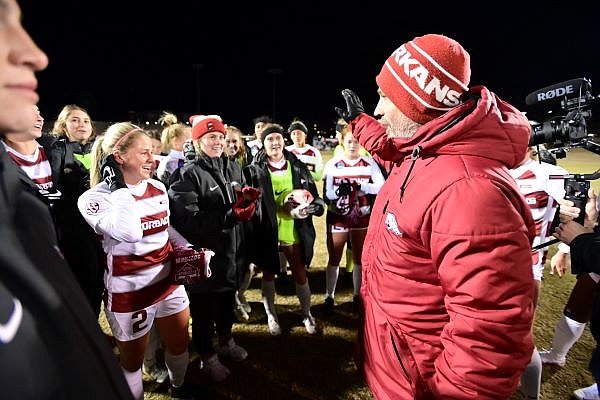 FAYETTEVILLE — A pair of lengthy undefeated streaks will be put to the test when Arkansas takes on Memphis in the NCAA Tournament round of 16 on Sunday.

The Razorbacks (13-3-4) are riding a 22-match unbeaten streak at Razorback Field and are 8-0 all-time at home in the postseason. A win against the Tigers would send the program to its second consecutive Elite Eight appearance.

Arkansas coach Colby Hale praised the crowd’s impact following the team's 5-2 win against Ohio State on Friday night. The match had an announced attendance of 1,196 on a frigid night.

“There is such great energy here,” Hale said. “You can feel it when we come out of the locker room. It’s an incredibly tough place to play and we feed off the (crowd) energy. The home-field advantage here…there is nothing like it.”

Memphis coach Brooks Monaghan dismissed any notion of nerves as his squad prepares to play in its first-ever Sweet 16 in a hostile road environment.

“Arkansas does a great job and they have great fan support,” Monaghan said. “We’re just going to tell the girls to take it all in. At the end of the day, it’s 11 versus 11 and it’s just another game.”

The 15th-seeded Tigers (11-5-5) traveled to Saint Louis for the first round of the tournament where they upset the second-seeded Billikens 1-0. They followed that performance with a 4-0 win against Mississippi State at Razorback Field on Friday.

Hale was able to conduct a bit of scouting during the Memphis-Mississippi State match that kicked off a few hours before Arkansas and Ohio State. Although, he may not have learned much that he didn’t already know due to his familiarity with the Tigers.

Prior to manning the Arkansas sideline, Hale shared a conference with Memphis for seven seasons as an assistant coach at UCF.

“We were traditionally the top two teams in the league,” Hale said of UCF and Memphis.

Monaghan has been coaching the Tigers since 2000 and had varying levels of success against teams associated with Hale.

In 2016, the Razorbacks beat Memphis 2-1 in overtime during the first round of the NCAA Tournament. It was the first time Arkansas hosted the NCAA postseason.

“It was a great game that could have gone either way,” Monoghan said.

Both goals for the Razorbacks came off set pieces during the 2016 game. Those remain a vital part of the team’s offensive production in 2022. Arkansas has scored four goals from dead balls through the first two rounds.

“I think they are a stronger team now than they were back in 2016, but they play a similar style,” Monaghan said.

The Memphis coaching staff emphasized the need for the team to play hard for the full 90 minutes Sunday. Despite being an underdog and conceding home-field advantage, Monaghan doesn’t want his team to feel like it has its backs against the wall.

“We have won championships and we deserve to be here,” Monaghan said.

The match will kick off at 5 p.m. and be streamed on ESPN-Plus.