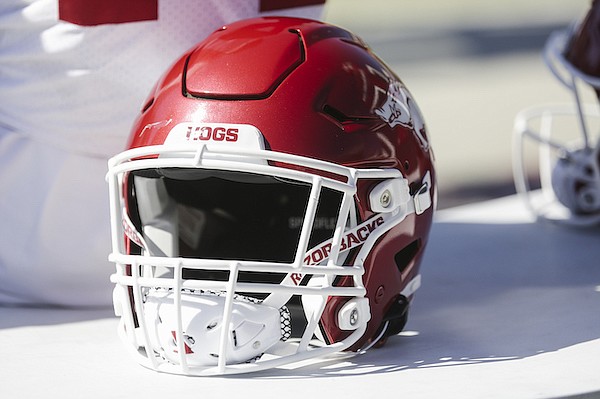 An Arkansas Razorbacks football helmet is shown on Saturday, Oct. 8, 2022, during a football game at Davis Wade Stadium in Starkville, Miss.

FAYETTEVILLE — Fayetteville’s deputy police chief says the officers involved in the Nov. 6 disorderly conduct arrest of two Razorbacks football players did nothing wrong, while an attorney for one of the players says the officers overreacted.

Anthony Brown, 19, and Myles Slusher, 20, were arrested about 2 a.m. as bars closed on West Avenue near Dickson Street.

Police body camera footage shows several people standing in the middle of West Avenue at that time, with a barricade blocking traffic near Dickson Street.

Deputy Police Chief Jamie Fields said officers typically close West Avenue from near Watson Street to Dickson when bars close in that area on weekends in an effort to get people out faster. That part of the entertainment district sees large numbers of people convene when bars close, presenting the potential for fights and conflicts the longer people linger, she said.

The officers working that night were trying to clear people off West Avenue to open it back up to traffic, Fields said. Body camera footage shows a handful of officers telling people to get off the street.

A camera worn by officer Nick White shows two other officers walking south down West Avenue among several people standing in the street. One officer goes to talk to a group to the west, and the other officer, Jared Barnett, heads east and approaches Brown, who is standing near the curb with Slusher.

Barnett grabs Brown’s right arm and moves him toward the sidewalk. Brown can be seen pushing the officer’s hand down, then pushing Barnett away with one hand.

From there, Barnett takes Brown to the ground. He and another officer restrain Brown. Brown asks Barnett why he put his hands on him.

“Because I told you to get out of the street,” Barnett says.

“Because you don’t listen,” Barnett says. “There’s no reason I should have to tell you two times to get out of the street.”

Fields said Barnett had interacted with Brown earlier in the night when he was standing in the street. That first interaction was not recorded by Barnett’s body camera, Fields said.

In later footage, Brown tells officers several times that Barnett cursed at him and “aggressively” pushed him toward the sidewalk. The audio on Barnett’s body camera does not begin until after Brown pushes him away.

“If somebody puts their hands on a Fayetteville police officer in the entertainment district or anywhere else, I expect them to make an arrest,” Fields said.

White can be heard on video telling Barnett he saw Brown look at Barnett before pushing him.

In a report, Barnett said he found a small bag of marijuana on Brown, which he seized for destruction.

Fields said she has reviewed the footage and it appeared Barnett did not, nor did any other officer, violate any policy. The footage matches what officers wrote in their reports, she said.

“We’re always looking at our operation and saying how can we do this better,” Fields said. “I think there’s something to be learned in all of our interactions in how we can handle them better.”

Video is unclear on what happened with Slusher. By the time Slusher intervenes, the video becomes too shaky to discern what’s happening.

Adam Rose, attorney for Slusher, said Slusher touched an officer’s shoulder after the altercation with Brown and started to ask what was happening. Another officer pulled Slusher away and told him he was under arrest, Rose said.

There was no need to arrest the pair, Rose said.

“I believe it was an overreaction for a fairly minor offense,” he said. “I think these officers in some way or shape or form kind of targeted these players.”

Neither Slusher nor Brown were deliberately standing in the street to antagonize officers, Rose said. A large crowd had gathered, and both men were moving with the flow of the crowd, Rose said.

Rose said he is pursuing the most minor offense possible for Slusher.

“I don’t think he was trying to put force on the officer,” Rose said. “I think he, honestly, was just trying to deescalate the situation, is what he told me. He was just confused.”

Brown does not have an attorney listed yet under Fayetteville District Court records.

Both men have been charged with disorderly conduct, a Class C misdemeanor punishable by up to 30 days in jail or up to a $500 fine. Arraignment for both is scheduled Dec. 1.