Razorback Report: Another huge half against the Rebels 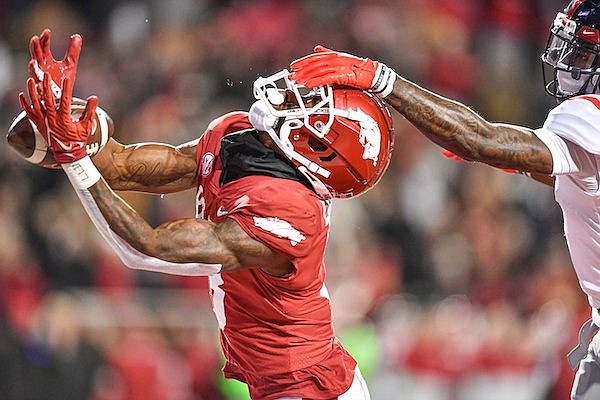 Arkansas receiver Matt Landers catches a touchdown during a game against Ole Miss on Saturday, Nov. 19, 2022, in Fayetteville.

FAYETTEVILLE — After the Arkansas Razorbacks scored 37 points in the second half of last season’s 52-51 loss at Ole Miss, their offense picked up where it left off in the first half of Saturday night’s game against the Rebels.

The Razorbacks took a 35-6 halftime lead over the Rebels at Reynolds Razorback Stadium, giving Arkansas a combined 72 points in its last four quarters against Ole Miss.

In that explosive first half against the Bulldogs six years ago, Arkansas running back Rawleigh Williams rushed for four touchdowns covering 72, 42, 7 and 33 yards.

Williams also had a 1-yard touchdown pass to tight end Austin Cantrell in the third quarter.

The six points for Ole Miss were the Rebels’ fewest in the first half this season. Their previous low-scoring first half was at Texas A&M, where Ole Miss trialed 14-10 before rallying to win 31-28.

Arkansas’ highest-scoring first half in Sam Pittman’s three seasons as coach was in a 45-3 victory over the University of Arkansas-Pine Bluff last year when the Razorbacks led 45-0 at War Memorial Stadium in Little Rock.

The Razorbacks’ highest-scoring first half this season prior to Saturday was when they led 31-21 at BYU at halftime. They went on to win 52-35.

Jefferson dressed out against the Tigers, but didn’t play because of a shoulder injury. Wagner didn’t dress out because of a back injury.

Ole Miss left offensive tackle Jayden Williams, a redshirt freshman from Conway, made his first start in his home state.

Williams, who has started all 11 games this season, was called for holding in the second quarter.

That flag negated a 15-yard touchdown pass from Jaxon Dart to Jordan Watkins in the second quarter.

The Rebels then settled for a field goal by Jonathan Cruz to pull within 21-6.

When Jadon Haselwood caught a first-down pass from KJ Jefferson for a 16-yard gain in the second quarter, it extended his streak with at least one reception to 27 games.

The streak started in 2019 when Haselwood was a true freshman at Oklahoma and had three catches for 25 yards in LSU’s 62-28 victory over the Sooners in the Peach Bowl, which was a College Football Playoff semifinal game.

Haselwood transferred from Oklahoma to Arkansas after last season.

Arkansas junior defensive Myles Slusher played against Ole Miss after being suspended for the LSU game because he and freshman Anthony Brown were arrested for disorderly conduct.

Slusher was on the coverage team for the opening kickoff of the game, then played on defense off the bench.

Arkansas junior linebacker Drew Sanders, a transfer from Alabama, got his first career interception when he picked off a pass by Jaxon Dart with 1:07 left in the second quarter.

Sanders looked like a tight end catching the ball at the Arkansas 39 and returning it 13 yards to the Ole Miss 48.

Chuck Barrett, Arkansas’ play-by-play man for radio broadcasts of football and basketball, will call five games involving both sports in a seven-day span while traveling to and from Maui, Hawaii.

After Barrett called the Arkansas-Ole Miss game, he was scheduled to fly from Northwest Arkansas to Dallas-Fort Worth International Airport and then on to Maui.

Barrett will call games in Maui on Monday, Tuesday and Wednesday — the Razorbacks’ opener is against Louisville — then fly back with the team on a charter flight late Wednesday, arriving in Northwest Arkansas on Thanksgiving Day.

On Friday, Barrett will fly on the UA school plane to Columbia, Mo., and call the Arkansas-Missouri football game that day at Faurot Field. After the game he’ll fly home on the team charter.

Adams, who came to the UA from Piggott and played in the NFL for the Philadelphia Eagles, was inducted into the Arkansas Sports Hall of Fame in 2019.

For the second consecutive game, Arkansas played with temperatures in the 30s at the opening kickoff.

It was 34 degrees for Saturday night’s start and gradually became colder.

By the start of the fourth quarter, the temperature was down to 27 degrees.

The sun was out to make it more comfortable and by the afternoon temperatures had risen to the 40s.

It’s the second consecutive year they’ve called a game from the sideline. They also did it for last season’s Ole Miss-Vanderbilt game when the Rebels beat the Commodores 31-17 in Vaught-Hemingway Stadium.

“Our production crew deserves the utmost respect and credit for what they pulled off last year,” Hart told the website Awful Announcing earlier this week. “Our job as announcers was really easy, but the technical aspect of getting the audio right, acquiring the equipment from remote cameras to handheld cameras for a different setup than we typically have is a real challenge for the truck, and that requires a lot of extra work on their part.”

During Saturday night’s game, the broadcast crew continually moved around the field for different vantage points.

“Last year, we kind of threw it together, and made it work,” Hart told Awful Announcing. “We had to tightrope through some things technically, and people had to work really hard to make sure it came off and there was no hitch, but there were some hitches involved that they just powered through.

“This year, we’ve got a little bit more technical support, and I think it will make it a whole lot easier on the crew since we kind of know what we’re getting into.”

Sam Carter was on the visiting sideline Saturday night after being with the home team the previous two years.

Carter is an Ole Miss assistant who coaches cornerbacks, the same position he coached as an Arkansas assistant the previous two years.

Ole Miss is the third consecutive SEC job for Carter. He was a quality control assistant at Missouri — when Razorbacks defensive coordinator Barry Odom was the Tigers’ coach — from 2016-19.

The Razorbacks and Rebels both have short preparation weeks for their next games.