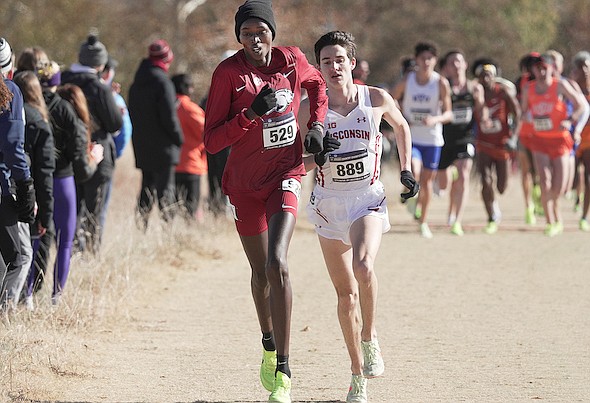 The University of Arkansas women’s and men’s teams had top 25 finishes at the NCAA Cross Country Championships on Saturday in Stillwater, Okla.

It was the final cross country meet for Lance Harter as Arkansas’ women’s coach. He is retiring in June at the end of the outdoor track and field season.

In cross country, Harter led the Razorbacks to the 2019 national championship and 12 top-10 finishes in 34 years.

“As I explained to our young ones, we were 40 points out of 15th place, which would have been the absolute goal, especially with this young group,” Harter said in an Arkansas news release. “To have three freshmen in the lineup is not real smart by the coaches, and then we lost our No. 4 runner [Katie McCune] this week to a leg injury. It just seems a dark cloud followed us the past couple of weeks.

“We were here and finished in the top 25 in the nation, which a lot of people hang their career on. We take it as a situation to build from it as this whole crew is back next year. We’ll look forward to a cross country season with more maturity and experience.”

Junior Isabel Van Camp, who hadn’t finished lower than 10th in any previous races this year, led Arkansas by taking 48th in 20:16.1.

Northern Arizona and host Oklahoma State each scored 83 points to lead in the men’s race, but NAU was awarded the championship trophy on a 3-2 tiebreaker based on the top finishers for the Lumberjacks and Cowboys.

“Patrick did a great job, got himself in the race right away,” Arkansas men’s Coach Chris Bucknam said in a news release. “He looked comfortable most of the way. To finish in the top 25 in his first Division I cross country championship is outstanding. He stuck his nose in there and did a phenomenal job for us.”

“As far as the team is concerned, we were looking for a top 20 finish, and didn’t quite get there in placing 23rd,” Bucknam said. “I’m proud of this team as far as how they competed.

“They were all dialed in, and we just didn’t have our best race today.”