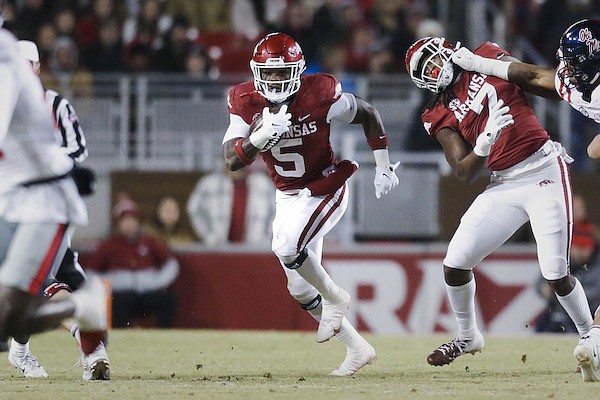 Arkansas running back Raheim Sanders (5) carries the ball during a game against Ole Miss on Saturday, Nov. 19, 2022, in Fayetteville.

FAYETTEVILLE — The University of Arkansas running attack rallied around the return of quarterback KJ Jefferson and bounced back from a couple of off weeks to gouge Ole Miss for 335 rushing yards in Saturday’s 42-27 rout of the No. 14 Rebels.

The score was deceiving as Arkansas threw just four passes in the second half and the Rebels run-blitzed with abandon after falling behind 42-6. The Razorbacks, led by Raheim Sanders’ career-high 232 rushing yards, had 323 yards on the ground through three quarters and just 12 in the fourth.

Ole Miss, the SEC rushing leader, also piled up a massive ground total with 463 yards, including 186 in the fourth quarter. Arkansas held a 323-277 lead on the ground through three quarters.

A healthier Jefferson proved to be a big challenge for the Ole Miss defense.

“They do a great job and with the quarterback back, he’s even more difficult,” Ole Miss Coach Lane Kiffin said. “Sanders had a great game.”

After running for 144 yards against Liberty then a season-low 133 against LSU without Jefferson, the Razorbacks surged for 113 yards beyond than their season average of 222.1 heading into the game.

“We really came together this week,” Arkansas tackle Dalton Wagner said. “We rallied around KJ being back healthy and full go. That was the confidence booster we needed going into it.

“The defense has been playing lights out the last three games. I think we got to clicking on offense. We knew what they were going to throw at us. Coach [Kendal] Briles called a heck of a game tonight. I couldn’t have been more happy with the game plan.”

Leaving out the ground-based service academies of Air Force, Army and Navy, who are all in the top 5 of FBS rushing, Ole Miss leads the country with 278.1 rushing yards per game. Arkansas would be fifth in the country at 233.5 per game using that metric.

The sophomore had the fifth-highest single-game total in school history, behind the school-record 321 yards by Darren McFadden, another famous No. 5, against South Carolina in 2005.

The Razorbacks held a rare Sunday practice on the day after a convincing 42-27 win over No. 14 Ole Miss.

Coach Sam Pittman discussed the week ahead during his radio show on Wednesday night.

“Now we never practice on Sunday but we have to because of a Friday game,” Pittman said. “We’ll practice Sunday, Monday, Tuesday, Wednesday. Wednesday we’ll practice in the morning and the kids will be out by noon.”

Players can spend Wednesday night and Thursday morning with family if possible before returning by 10:45 a.m. Thanksgiving Day. The team will assemble and make the road trip to Columbia, Mo., for the 2:30 p.m. kickoff at Faurot Field.

Ole Miss Coach Lane Kiffin was asked if he felt the team was distracted with “all the things” that were going on during the week, a clear reference to the reported interest Auburn has in snaring Kiffin away from the Rebels.

Kiffin elected to take his response in a different direction, referencing the emotional letdown some teams experience after playing Alabama. LSU managed to eke out a 13-10 win at Arkansas last week, one week after a heavily emotional 32-31 overtime win against the Crimson Tide. Ole Miss suffered a deflating 30-24 loss to Alabama before losing to the Hogs.

“A lot of analytics of Alabama hangovers,” Kiffin said. “Ask LSU. They came in here last week and scored 13 points against these guys. So maybe there was some of that. But I think we really didn’t play well on defense, obviously.”

Arkansas did not have a turnover against the Rebels, winning the statistical battle 3-0. The Razorbacks moved fractionally back onto the plus side with a 15-14 edge in takeaways, a turnover margin of +0.09 per game that is tied for 63rd in the country.

Arkansas had not won the turnover battle by a margin of three or more in a game since a 3-0 edge during a 44-30 win over South Carolina on Sept. 10.

Coach Sam Pittman thinks playing LSU last week in the cold and practicing in it all week helped prepare the Razorbacks for Saturday, which featured 34 degrees at kickoff and temperatures dipping into the mid-20s.

“Like I told them, there’s a recipe to not win, and that’s minus-three in the turnover margin,” Kiffin said. “You’re not going to win most of the time. That shows you you can have all these yards and all this stuff and not win because you’re minus three.”

Arkansas nickel back Myles Slusher made an immediate impact in his return to the lineup, stopping receiver Dayton Wade for a 2-yard loss on the second play from scrimmage.

Slusher finished with eight tackles, four solo, to tie with fellow defensive backs Hudson Clark and Dwight McGlothern for second on the team behind 10 from linebacker Drew Sanders.

Ole Miss had an 11-yard pass play, featuring a great catch by Jonathan Mingo, nullified due to offensive pass interference on the game’s first snap, and that became a trend.

Ole Miss quarterback Jaxson Dart referenced the critical penalties, saying, “I think because of some of those things we allowed it to get in our heads a little bit.”

Arkansas wideout Jadon Haselwood extended his streak of games with at least three catches to 11, every game he’s played as a transfer from Oklahoma.

Haselwood had three receptions for 36 yards, all in the first half, against the Rebels.

The sophomore from Rockledge, Fla., ran for a career-high 232 yards and had scoring runs covering 20, 8 and 68 yards while averaging 9.7 yards per carry. He also led the team with 5 receptions.

The junior from Denton, Texas, led the team with 10 tackles, including 4 solo stops, and 0.5 tackles for loss. Sanders notched his first career interception to set up a UA touchdown and recovered a fumble.