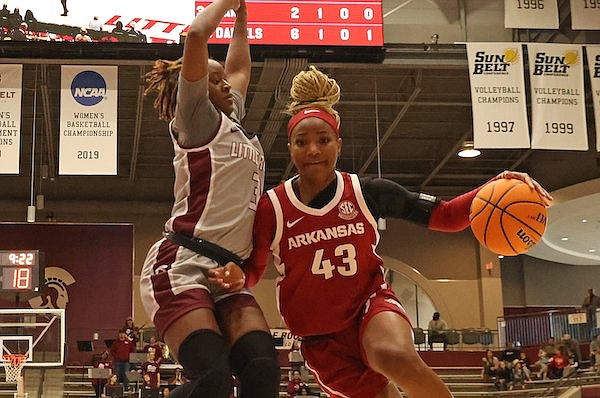 Arkansas guard Makayla Daniels (43) drives to the basket during a game against Arkansas-Little Rock on Sunday, Nov. 20, 2022, at Stephens Center in Little Rock.

If nothing else, the University of Arkansas-Little Rock, coached by long-time friend Joe Foley, is always willing to provide a stiff defensive test.

But Neighbors didn’t call timeout. Nor did he say anything to his team.

He wanted them to figure it out, and the Razorbacks obliged.

Arkansas romped past the Trojans 93-49 at the Jack Stephens Center, remaining unbeaten this season and a perfect 11-0 against in-state opposition since the ban against such games was lifted prior to the 2020-21 season.

Eleven of the 12 players who took to Joe Foley Court on Sunday logged at least one point, with Chrissy Carr leading the way. The Eden Prairie, Minn., native scored a game-high 22 points while shooting 7-of-10 with 4 three-pointers.

“[That’s the] best we’ve played all year, not even close,” Neighbors said. “Their gameplan to start the game really frustrated us. … We made a few adjustments. We stopped setting as many screens and tried to play in space — get away from what wasn’t working and go [with] something different.”

The onslaught came in bunches for Arkansas (5-0). After an ugly opening couple of minutes, the Razorbacks limited UALR to one field goal over nearly eight minutes, stretching their lead to 17-5.

Arkansas then dominated the second quarter, fully asserting itself with a 19-4 run that all but decided things before halftime.

Not only did the Razorbacks lead 44-19 at intermission, but they held a 26-8 rebounding advantage — much of which was a product of the Trojans making hitting 8 of 32 shots from the field over the game’s first 20 minutes.

“Missing shots,” Foley said when asked about what most disappointed him. “We got some good open looks and I thought if we hit them early that we could kind of get a little momentum and have a little confidence.

“When we didn’t hit them, I knew we were in trouble.”

As cold as the Trojans were, the Razorbacks stayed hot into the third quarter. Arkansas turned on the afterburners with a 15-2 burst in fewer than three minutes.

Carr hit 3 three-pointers in as many possessions and Makayla Daniels, who finished 12 points and 4 assists, punctuated the spurt with a three of her own.

“I stopped calling plays,” Neighbors said. “I was slowing us down. Mak [Daniels] said, ‘Coach, let’s just go. Stop calling actions.’ So, I learned a lesson.”

Neighbors said what impressed him most was that each of his team’s first five games has featured different “variables” — a tough road environment at Arkansas-Pine Bluff, a morning game against Central Arkansas, a close call versus Tulsa and a quick turnaround playing Kent State.

Each time, the Razorbacks answered the bell. It was no different Sunday, ultimately overwhelming a defensive-minded UALR, and it’s a lesson Neighbors hopes his team can carry forward into a new test: playing in the U.S. Virgin Islands at the Paradise Jam.

“We knew they were going to be physical with us, so we prepared for that but it’s harder said than done,” Arkansas forward and Little Rock Central alumnus Erynn Barnum said. “We just needed to calm down and do what we know to do.”