Hogs fall to Creighton in top-10 thriller at Maui Invitational 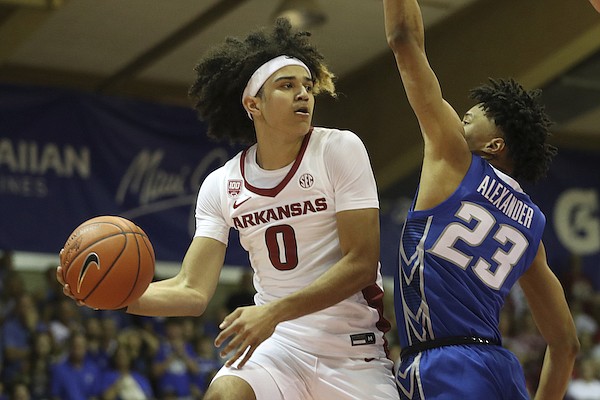 Creighton held off a resilient second-half effort by Arkansas, and the 10th-ranked Bluejays defeated the ninth-ranked Razorbacks 90-87 in a thrilling game Tuesday in the semifinals of the Maui Invitational.

Arkansas (4-1) suffered its first loss of the season, while Creighton (6-0) advanced to Wednesday’s championship game against 14th-ranked Arizona.

The Razorbacks will play 17th-ranked San Diego State in the third-place game Wednesday at 9 p.m. Central. The Aztecs lost 87-70 to Arizona on Tuesday.

Creighton led by as many as 12 points in the first half, but had to withstand waves of scoring runs by Arkansas in a second half that included 10 ties and 10 lead changes.

"It was just an incredible college basketball game," Creighton coach Greg McDermott said. "There were a lot of haymakers thrown out there in 40 minutes. (The Razorbacks') poise for as young as they are is really incredible.

"That team is winning a lot of games. I would like to think we're going to win a lot of games. They just kind of ran out of time. It was just an awesome basketball game against a very, very good opponent."

Center Ryan Kalkbrenner made a contested reverse dunk with 1:12 remaining to put the Bluejays ahead for good at 83-81.

Arkansas pulled to within one point twice in the final 19 seconds, including 88-87 when Anthony Black made a three-point shot with 2.3 seconds to play.

Trey Alexander made two free throws to give the Bluejays a 90-87 lead and Black missed a contested half-court shot at the buzzer.

"We couldn't play any harder than what we played," Arkansas coach Eric Musselman said on the Razorback Sports Network post-game show. "Creighton is a great basketball team."

Black, a freshman, scored 26 points for the second consecutive night to lead the Razorbacks. Council added 24 points and Trevon Brazile scored 17 before fouling out late in the game.

Creighton made 21 of 29 free-throw attempts, and attempted 28 of its free throws after halftime. Arkansas guard Davonte Davis was called for a Flagrant 1 foul and the Razorbacks' bench was assessed a technical foul early in the second half as a free-flowing game turned into a grind for both teams.

One 3-minute, 45-second stretch of play early in the second half took 14 minutes to play.

Nembhard made all four flagrant and technical free throws — the difference in the Bluejays' three-point margin of victory.

Arkansas shot 33 of 70 (47.1%) and 8 of 20 from three-point range. The Razorbacks were 13 of 17 at the free-throw line, but made a critical mistake late when freshman Jordan Walsh committed a lane violation on a second attempt by Black with 29.4 seconds to play.

Arkansas stayed close by capitalizing on 17 Creighton turnovers that led to 21 points. The Razorbacks also scored 15 second-chance points off of 10 offensive rebounds.

Creighton never trailed in the first half and led 40-28 when Trey Alexander made a driving layup with 1:43 left in the half.

But the Razorbacks closed the half on a 6-0 run to pull within 40-34 at halftime. All six points were at the rim — a layup by Black, a second-chance put back by Mekhel Mitchell following a missed jumper by Council, and an alley-oop pass from Black to Brazile with 13 seconds remaining.

The Razorbacks fell to 9-15 in games that included two top-10 teams. Arkansas had not played in a top-10 matchup in the regular season since January 1995.

CORRECTION: The time of Wednesday's game was initially listed incorrectly.