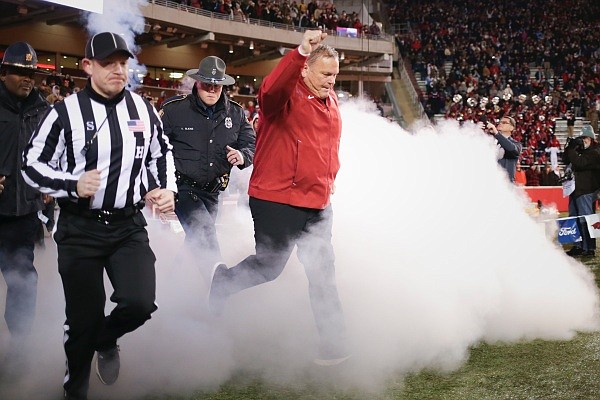 Arkansas coach Sam Pittman runs out onto the field on Saturday, November 19, 2022, before the start of a football game at Donald W. Reynolds Razorback Stadium in Fayetteville.

FAYETTEVILLE — The University of Arkansas held a morning practice on Wednesday and players were free to get to family Thanksgiving plans for around 24 hours before reporting at 10:45 a.m. for travel to Columbia. Mo., for Friday’s 2:30 p.m. game against Missouri.

Arkansas will do a morning walk-through on campus before flying north.

Coach Sam Pittman said the team would have Thanksgiving dinner in the 6 o’clock hour.

At his weekly news conference on Monday, Pittman went through a litany of things he gives thanks for as a nod to the holiday.

“I’m thankful for a lot of things,” he said. “I’m thankful to be the head coach at Arkansas. I’ve been married [to his wife, Jamie] 36 years. I’ve got my health. I don’t look healthy, but I have my health.”

Pittman, who will take an 18-16 record into Friday’s game, said he also has gratitude for the good times and the tough times.

“The state of Arkansas has been really good to me, accepted me, and I’m thankful for that,” he continued. “Of course I’ve got a group of kids in there that believe in us and are fighting their butts off, and I’m thankful that we fought back.

“A lot of times you see teams at this point in the year, and they don’t. And we fought back. And we’ve got pride, and I’m thankful for my assistant coaches that they help instill that pride in the team and, ‘Let’s go get our respect back.’

“Somebody asked me about what to play for. Go get your pride and your respect back. We did in a small way, I felt like, on Saturday. Thanks for the question. I’m thankful for the question.”

Missouri has played a single-high safety look much of the year, trusting its cornerbacks Ennis Rakestraw Jr. and Kris Abrams-Draine to hold up in man coverage while devoting an extra couple of defensive backs to run support in its 4-2-5 scheme.

The Tigers, under first-year defensive coordinator Blake Baker, rank 36th in the FBS and fourth in the SEC in run defense, allowing 128.5 yards per game.

“They’re stopping the run,” Arkansas Coach Sam Pittman said. “I mean, you can’t run the ball on them.

“It’s basically a two-high versus a one-high thought process. If there’s two high, that means that you’re taking somebody out of the box. If it’s one high, you’ve got numbers. You declare the numbers. … They’re a one-high team. They’re going to outnumber you and have one more.”

“They don’t give up many points,” he said. “They don’t let people run the ball on them. Their D-line is very, very good. They’re twitchy and they play with good hands and good feet.”

Quarterback KJ Jefferson said the Tigers will “do some things up front, try to junk up the run, try to throw different schemes at us, try to get us off our game, off balance.”

KJ Jefferson is back in the top 10 in the country in passer efficiency after a clean performance against Ole Miss.

Jefferson now ranks 10th in the FBS and second in the SEC behind Tennessee’s Hendon Hooker with a rating of 166.19. The rating takes heavily into account completion percentage, touchdown to interception ratio and yards per pass attempt.

The Razorbacks and Tigers have only two opponents in common: Auburn and South Carolina.

Missouri split games against those teams, falling 17-14 in heartbreak fashion in overtime at Auburn, and winning handily 23-10 at South Carolina.

Missouri added a pair of Hoppers on defense from the transfer portal who are cousins.

Linebacker Ty’Ron Hopper, a transfer from Florida, has been one of the Tigers’ biggest impact adds. He has 57 tackles, including 11.5 tackles for 37 lost yards, 2.5 sacks, 6 hurries, 4 pass breakups and an interception. He wears No. 8.

Defensive end Tyrone Hopper II, who came over from North Carolina, wears No. 5 and he has 5 tackles, including a half-tackle for loss, but he has been injured.

Six in a row

Missouri defensive end DJ Coleman has started the last couple of games at the spot where Trajan Jeffcoat started the first nine games of the year, and the 6-5. 264-pound graduate student has delivered.

Coleman has notched at least a half-sack in each of the last six games. He left last week’s senior night game against New Mexico State briefly with an undisclosed injury, but returned to log sack No. 4.5 on the season.

Missouri holds a 9-4 lead in the all-time series, including a 5-0 edge in games played on campus.

The Razorbacks’ only win in Missouri in the series was a 7-6 decision in St. Louis in 1944.

Coach Sam Pittman touted his team when talking to the SEC Network immediately after the win over Ole Miss, saying the Razorbacks took down another top 15 team and their sixth ranked opponent during his tenure.

The CBS announcing crew assigned to the Battle Line Rivalry game will consist of Tom McCarthy on play by play, former Colorado, Washington and UCLA coach Rick Neuheisel as analyst and Sherree Burruss as the sideline reporter.

The Arkansas coaches came up with a way to add motivation for Saturday’s game while also tying more people into the team bond.

Coach Sam Pittman said the team distributed t-shirts and asked each player to write down the name or names of people they wanted to bring into the fold. The players wore the shirts underneath their shoulder pads on Saturday.

“We talked all week about dedicating the game to somebody else and bringing them into our family,” Pittman said. “They had a shirt on underneath and they wrote on them in marker who they want to bring into the family, our football family.”

Tailback Raheim Sanders said he wrote down his family on his t-shirt.