Long day for KJ at hands of Big Al's line 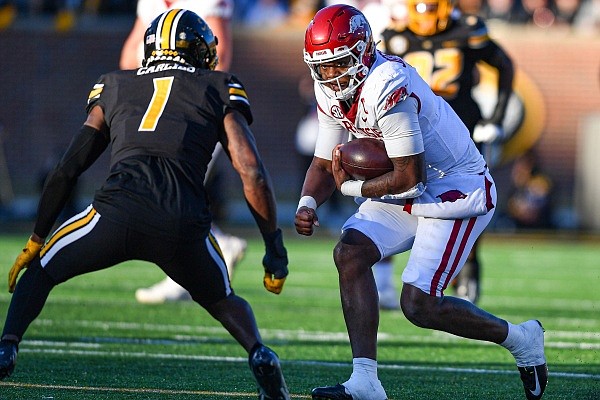 The Tigers had seven sacks — including five by the defensive line Al Davis coaches — in beating the University of Arkansas 29-27 on Friday at Faurot Field.

Davis, who got the nickname “Big Al” when he played defensive tackle for Arkansas from 2009-12, was promoted from defensive analyst to defensive line coach midway through last season when Tigers Coach Eli Drinkwitz fired Jethro Franklin.

The seven sacks were the most allowed by Arkansas this season and the most by Missouri.

LSU had five sacks in its 13-10 victory over the Razorbacks — when Malik Hornsby and Cade Fortin played quarterback with KJ Jefferson sidelined by a shoulder injury — for the previous high against Arkansas.

The Tigers’ previous high for sacks by their defense also was five — at Auburn and against Kentucky in games Missouri lost 17-14 in overtime and 21-17, respectively.

It was the most times Jefferson has been sacked in 25 career starts.

The previous high for sacks Jefferson had endured was four by Liberty earlier this season, when the Flames beat the Razorbacks 20-19. He also was sacked three times in seven previous games.

Missouri came into the game with 26 sacks on the season for 165 yards in losses.

“They’ve had times where they get after the quarterback,” Razorbacks Coach Sam Pittman said. “Off the edge and up the middle, they were pushing the pocket.

“There wasn’t a place for KJ to go. We were getting beat around the edge, and we were so deep that he couldn’t step up.”

Lost yards on the sacks against Arkansas totaled 36 yards.

“They disguised some things. They brought different stunts and different pressures,” said Jefferson, who completed 20 of 27 passes for 212 yards and 2 touchdowns with 1 interception. “I mean, they had a great game plan versus us and they executed it well.”

Missouri senior defensive end Isaiah McGuire had two sacks for 15 yards in losses. He has 13 tackles for 80 yards in losses this season, including 7.5 sacks.

Other defensive linemen coached by Davis who had sacks were one each by tackles Darius Robinson and Kristian Williams and end Johnny Walker. Safety Martez Manuel also two sacks.

“Gave us some trouble out on the edge there, but overall we’ve got to strain,” Wagner said. “We’ve got to be better to give KJ a shot to make the plays that we need to make.”

Davis, from College Park, Ga., was a team captain for the Razorbacks as a senior. He played in 49 games and made 78 tackles.

Pittman said he believes Missouri’s defensive line has continued to get better under Davis.

“You can see improvement with their defensive line ever since he’s been coaching them,” Pittman said. “He’s done an outstanding job.”

Missouri Coach Eli Drinkwitz, who grew up in Alma, said last year that he became familiar with Davis starting in 2013, when he was a volunteer coach at Fayetteville High School.

Davis was Hutchinson (Kan.) Community College’s co-defensive coordinator from 2017-19 and was Illinois’ defensive line coach in 2020 for Coach Lovie Smith.

When Smith was fired — and replaced by Bret Bielema, the former Arkansas coach from 2013-17 — Davis landed at Missouri.

“I’ve been impressed with Al ever since I’ve been around him,” Drinkwitz said last year. “I’ve developed a relationship with him over an extended period of time.

“I know he’ll do a good job of connecting with our guys in helping them grow as players and as people.

“He’s a connector. That’s why I’m excited about him being able to put his stamp on this team moving forward.”

Davis’ stamp was all over the Tigers’ victory on Friday.