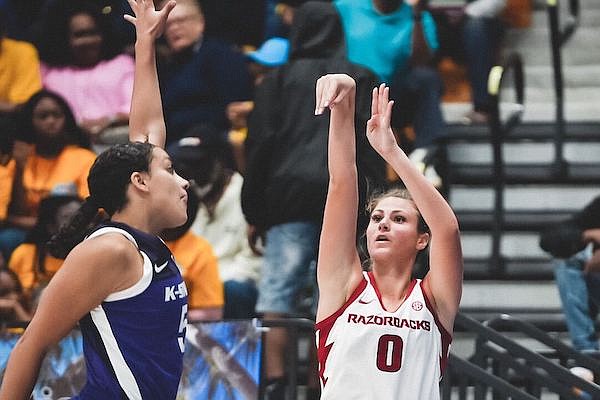 Arkansas' Saylor Poffenbarger (0) shoots during a game against Kansas State on Saturday, Nov. 26, 2022, at the UVI Sports and Fitness Center in Charlotte Amalie, U.S. Virgin Islands.

Entering the week, University of Arkansas women’s basketball coach Mike Neighbors said he hoped his team would fight through fatigue and play off adrenaline for its Paradise Jam finale against No. 25 Kansas State.

Arkansas (8-0) picked up a marquee non-conference win and knocked Kansas State from the unbeaten ranks, defeating the Wildcats 69-53 on Saturday night in St. Thomas, U.S. Virgin Islands. The win made the Razorbacks, who went 3-0 in the Paradise Jam’s Reef Tournament, champions of the event.

“Three games in three days against increasingly difficult situations,” Neighbors said. “We just continued to make improvements. That one was maybe our most complete game yet, against a really, really good team.”

Kansas State (7-1) took a 6-2 lead out of the gates, the largest advantage it held. Arkansas then went on a 9-2 run to go ahead by two points, capped with a three-pointer by redshirt-freshman Saylor Poffenbarger.

The Connecticut transfer made her impact felt early on both ends of the court for the Razorbacks. She scored six points to help Arkansas to a 15-13 advantage after the first quarter, and guarded Gabby Gregory, who entered the game averaging the nation’s ninth-most points (23.4).

Poffenbarger held her to 0-of-6 shooting in the first half, and Gregory finished with 5 points off 1-of-10 shooting.

“I knew she could do it,” Neighbors said of giving Poffenbarger the matchup. “She stepped up and accepted that challenge, and I thought she was unbelievable. I’ve watched Gabby Gregory since she was in the eighth grade, and I’ve never seen anybody shut her down like that. Saylor did a heck of a job.”

Erynn Barnum continued her stellar senior season. The 6-2 forward scored 13 points in the first half, winning her matchups against the Wildcats’ zone defense. Barnum made a difficult reverse layup to put the Razorbacks up six points early in the second quarter.

“She’s that guy in the 40-and-over league that nobody wants to guard,” Neighbors said of Barnum at halftime on the ESPN3 broadcast.

Makayla Daniels capped a strong quarter by drawing a foul while making a tough runner off the glass with one-half second left on the clock. She completed the three-point play with a made free throw which put Arkansas up 38-26 at the intermission.

The third quarter started much like the second ended. Arkansas stretched its lead out to 46-28 after Chrissy Carr and Daniels drilled back-to-back threes to force a Kansas State timeout. It was just the beginning of the Razorbacks’ three-point onslaught.

Carr finished with a team-high 18 points against her former team. She played three seasons for Kansas State from 2018-21. The grad transfer guard shot 7-of-12 from the floor and topped all Razorbacks with 3 three-pointers.

Four Arkansas different players knocked one down from deep in the third quarter, stretching the advantage to 21 points entering the fourth quarter. The Razorbacks shot 56.3% from the floor in the period while holding Kansas State to a 27.8% mark. Poffenbarger finished with six assists to lead all players, two of which came off three-pointers in the third quarter.

“I would hate to try to have to decide how to guard us,” Neighbors said.

The Wildcats were limited to 12 points in the final quarter, protecting the lead en route to a tournament championship. Kansas State never shot over 30% in a quarter, finishing with a season-low 53 points.

Arkansas continued to rebound well, holding a plus-eight rebound margin over the Wildcats. Neighbors’ team, which added much size this season, has won on the glass each game this year.

The Razorbacks collected tournament hardware and were given championship gear postgame. Neighbors pointed to good times both on and off the court, saying his team enjoyed riding on catamarans and snorkeling.

“This was a really good week for us,” the sixth-year Arkansas coach said. “Regardless of the outcome of this game, there was not a team down here in either division that got more out of this three-day trip than we did.”

Daniels was named the tournament’s most valuable player after averaging 17.3 points in the Razorbacks’ three games.

“I’m proud of her and for her,” Neighbors said. “We’ve talked about it for years that she doesn’t get the awards that she deserves. She and I have a little saying that we share, that it’s better to not get ones than to get ones you didn’t earn. She certainly earned it this tournament.”

Carr was named to the Paradise Jam all-tournament team. She made 8 three-pointers in the Razorbacks’ final two games of the event.

The victory gave Arkansas a 4-3 advantage in the teams’ all-time series. It was the first neutral-site game between the programs. The teams last played in 2019, a game then-No. 23 Arkansas won 81-72 in the Big 12/SEC Challenge.

The Wildcats entered The Associated Press Top 25 this week after defeating then-No. 4 Iowa by one point. The Razorbacks did not receive any votes in the AP poll but had seven votes in the USA Today Coaches Poll. Both rankings are updated weekly on Mondays during the college basketball season.

Arkansas is one of 28 remaining undefeated Division I women’s basketball teams and join South Carolina and LSU as the only SEC unbeatens. The Razorbacks will return to action Thursday against Troy inside Walton Arena.