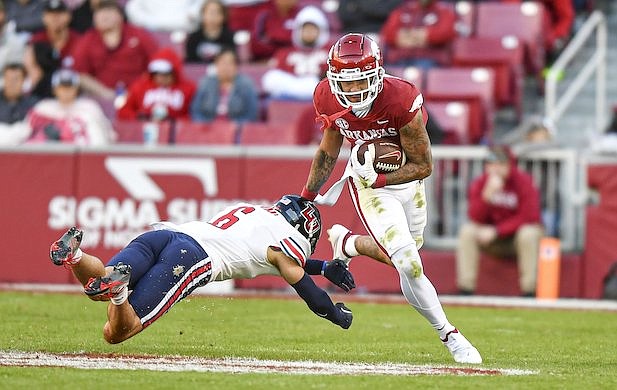 Arkansas receiver Jadon Haselwood runs with the ball during a game against Liberty on Saturday, Nov. 5, 2022, in Fayetteville.

FAYETTEVILLE — University of Arkansas quarterback Malik Hornsby said on Monday that he will enter his name in the transfer portal for the second consecutive year, while junior receiver Jadon Haselwood announced he was opting out of a bowl game to prepare for the NFL Draft.

Razorbacks tight end Erin Outley also announced via social media he will be entering the portal, joining former Parkview High teammate James Jointer, the freshman running back who declared his intention to transfer last week, and defensive back Jacorrei Turner.

Haselwood announced his move at nearly 10 p.m., writing on Twitter, “I am Calling all Hogs when I say thank you to my coaches, my teammates and every fan who has made this season special.”

Player movement is expected for much of the week for the Razorbacks and other programs across the country into the portal, which was created in October 2018.

Pittman, who fired strength and conditioning coach Jamil Walker on Saturday, the day after he said the Hogs were “out-physicaled” in a 29-27 loss to Missouri.

Two potential candidates to replace Walker are former Razorbacks in Kiero Small, who was interviewing on campus Monday, and Tenarius “Tank” Wright. A source said there are other candidates as well.

Small, who played fullback for the Razorbacks from 2012-13, is an assistant strength and conditioning coach at Michigan under Ben Herbert under Coach Jim Harbaugh. He was a seventh-round draft choice by the Seattle Seahawks in 2014 and also signed with the Cleveland Browns and his home-town Baltimore Ravens during a two-year NFL career spent mostly on practice squads. He has also worked at Arkansas as a graduate assistant on the strength and conditioning staff.

Hornsby, a 6-2, 186-pound redshirt sophomore, also entered his name last year but withdrew it a few days later after talking to Coach Sam Pittman and receiving assurances he would compete for the starting quarterback job with KJ Jefferson.

Hornsby was 13-of-27 passing for 268 yards with 1 touchdown and 2 interceptions, and had 172 rushing yards on 31 carries during the regular season.

“Thank you Razorback Nation,” Hornsby wrote. “My journey here as a Razorback has come to an end. I will make the best decision for me and my future. I am entering my name in the transfer portal.”

The Missouri City, Texas, native wound up making a splash at wide receiver in spring drills and splitting practice time at quarterback and wideout in the early going in 2022.

Hornsby had 2 carries for 21 yards and 2 catches for 8 yards in light use through the first five games. However, he came in as a backup to Cade Fortin behind the injured Jefferson in a Week 6 loss at Mississippi State and completed 8 of 17 passes for 234 yards, with 1 touchdown and 2 interceptions while also rushing for 114 yards on 8 carries.

After that game, Coach Sam Pittman said Hornsby would work only at quarterback as the second-teamer behind Jefferson.

Hornsby got a start against LSU with Jefferson sidelined by a shoulder injury and struggled with 4-of-9 passing for 24 yards and 18 carries for 37 yards. He was sacked four times, lost a fumble and slipped down for lost yardage on a key fourth down play before giving way to Fortin.

Outley, a 6-4, 255-pound redshirt freshman, was recovering from a knee injury throughout the 2021 season, and the former three-star signee has not played this year.

Pool reached out to the Arkansas fan base to post an update the day after he missed the finale at Missouri due to surgery to repair a labrum muscle injury in one of his hips.

Pool, a fifth-year senior from Lucas, Texas, addressed his remarks to Razorback Nation, writing, “You have given me the opportunity to live out a dream, that inspired me as a young kid to love the game of football. This past week I underwent the first of two surgeries to repair my hips.

“Arkansas Football has many great years ahead and it’s been an honor to be a part of Razorback history. As to my future, I am going to spend the upcoming months rehabbing to get back to full health.”