Pittman knows much work left to be done 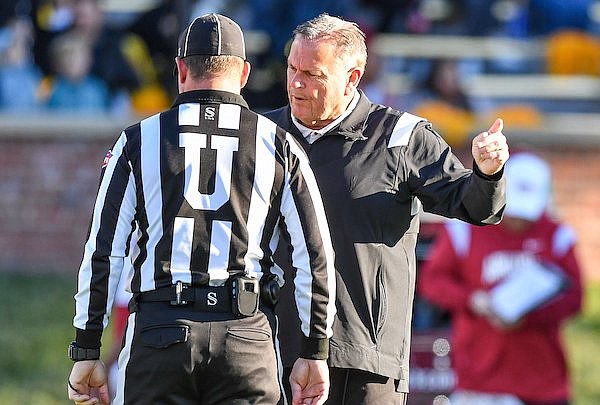 Arkansas coach Sam Pittman (right) speaks to an official during a game against Missouri on Friday, Nov. 25, 2022, in Columbia, Mo.

No one was more disappointed in the Arkansas Razorbacks’ loss to Missouri than Sam Pittman.

It hung like a 200-pound weight around his neck. It was even heavier in his voice.

Like all the fans, those disgruntled and those who are satisfied that 6-6 and going to a bowl is still a far better place to be than under Chad Morris, Pittman wanted that game.

He admitted that the Razorbacks were not physical at the line of scrimmage.

It didn’t come as a complete shock when one of the first things Pittman did after arriving home was fire strength and conditioning coach Jamil Walker.

More than likely, it was more than just what happened on the field. It wasn’t the first time this year that the Razorbacks have been dominated in the trenches, but seven sacks by a team that had only 26 coming into the game is exasperating.

Even Liberty controlled the line of scrimmage in the first half.

There are as many legitimate reasons the Hogs went 6-6 instead of 9-4, as there are complaints about both coordinators.

Yes, it all starts and ends with Pittman. He says so after every loss, but fans everywhere question calls and schemes after losses.

It was obvious Missouri sold out to stop the running game and was successful, but the Razorbacks still ran 38 times, 19 times by KJ Jefferson, who completed 20 of 27 passes.

No need to mention that everyone is keenly aware that on short yardage the Razorbacks actually ran tight end Trey Knox instead of a running back or Jefferson.

When a defense gives up a score on six of an opponent’s first seven possessions, fans are going to ask why?

It is part of the game.

So there are questions that linger when a team that goes 9-4 turns around and goes 6-6.

Only Pittman knows if Walker was the first of the changes or he intends to tweak his staff more. There also seems to be some thought that some coaches might make a change.

The big question is how many players are going to seek greener pastures, which really means more playing time.

Myles Slusher’s transfer was expected. He left his teammates with one game left.

Unlike several others, he was not injured or hurt. It left Arkansas thin at a position that was already skinny.

Some of the players apparently are unhappy about Walker leaving.

The official day for entering the transfer portal is Dec. 5 and lasts for three weeks. Pittman warned the media this might be a busy week.

A year ago, Arkansas was winning the close games. This season, the Hogs lost four games by a field goal or less, and what compounded that was they lost three of their last four games by three or less.

Of those four losses, all except LSU should have been in the W column.

A freak fumble return by Texas A&M, a creaky slow start against Liberty and being dominated at the line by Missouri turned a promising season into an average one.

One thing that helps the program is Pittman is solid as a rock.

He was genuinely and deeply disappointed last Friday. He not only wants better, he expects it.

He was going to roll up his sleeves and go to work anyway, but now he’s even more motivated to take care of the program that took a chance on him three years ago.

Walker was the first coach Pittman has ever fired, and while it might have been difficult, it is obvious he felt a change was needed immediately.

The next few weeks are going to be interesting, but one thing is certain, no one is going to outwork Pittman. He’s visiting the home of every signee and plans to spend a lot of long hours in the transfer portal mining for talent.